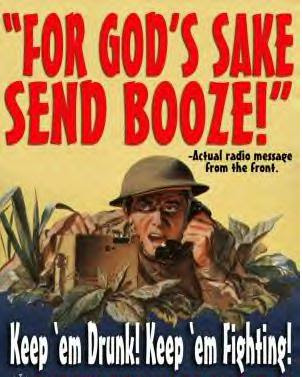 Labour condemned on liquor outlet issue
National is taking the Government to task over its record on violent crime, as the Beehive feels the political heat from three high profile homicides in South Auckland within nine days. Sensitivity about the crimes was put aside in Parliament yesterday as National leader John Key accused Prime Minister Helen Clark of doing nothing to stem the growth of liquor outlets across the country, and challenged her record on law and order. Mr Key said that liquor outlets - which Helen Clark on Monday fingered as part of the cause of violence in South Auckland - had been identified by government ministers as an issue in 2006 but no action had been taken since.

Good point Mr Key, so what happened here? Well, let’s be frank, we can’t blame Labour the way National have, as I have no doubt that National will be a much bigger whore for the Alcohol industry than Labour were, we liberalized where booze can be sold and how many places it can be sold so much so that we have this inane situation where a prohibited substance can be sold literally everywhere all for a massive discount, visualize with me folks – we are a country of alcoholics drowning in discounted booze. The reason Labour didn’t move on this is because they are petrified of being painted out as being PC – you could see what National would say – and I paraphrase here, “Helen Clark is a Nanny State and she wants to tell you where you can and can’t buy booze, NANNY STATE! NANNY STATE! NANNY STATE! THE PINKO TREE HUGGING MAAAAAAAAAAAAAAAORI LOVERS, IT’S POLITICAL CORRECTNESS GONE MAD!’ – that would perhaps word for word be what Gerry Brownlee would have to say on the issue. The reality is that Labour are so sensitive to that attack as they know it feeds that redneck, rugby humping, knuckle dragging talkback part of NZ that still don’t like MMP and any health benefits to social cohesion from limiting where you can buy booze from would be completely washed away in the chorus of yapping ‘Nanny State’ echos that pass for opinion in this country. So while National are right to ask why Labour have sat on their hands, the answer really is with what National would have said to such moves.

The Asians are committing cultural genocide in this country. They exploit vulnerable people just to make money and are ruining the reputations of brown people who happen to live in poverty stricken areas. Put them all on a slow boat back to China and don't let them back in.

It appears that Bomber is getting conservative in his old age?

Bomber has always been a small minded control freak. He is just arbitrary about what he wants to control. You can tell he has no real arguments because he has inserted the usual "Maaaaaorri" strawman.

For a rational perspective check out NRT (not even a member of the VTWC!) who points out that despite a twelve fold increase in booze outlets there has actually been a 10% decrease in the amount of alcohol consumed. Or just observe how South Auckland has a much higher people to booze outlet ratio than areas with lower crime rates. Or observe how prohibition / draconian supply restrictions actually encourage criminality.

No, you won't find any of that in his post. It's pretty clear that his irrational support of a poorly thought out policy has far more to do with his blind support of Labour and a desire to bash National.

I love it how everyone - both left and right - skirts around the REAL problem here: More booze being pushed into an area populated mostly by people who's genetics dictate that they will NEVER be able to handle their piss without turning into cave men and women = a great deal more violence and mayhem