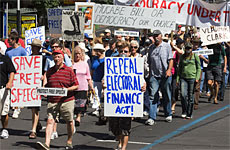 The Herald is reporting that 500 protestors marched in the ‘silent’ protest against the EFB, it wasn’t hard that it was ‘silent’ as there were only 150 protestors, I know, I was there and I counted them! It may as well have been an invisible protest! That the Herald has given so much space for a 150 person protest, when it is always the Herald who are more than happy to under-report the size of any other protest is a desperate attempt to justify their ‘Democracy Under Attack’ nonsense. I was at the first EFB march because in it’s unaltered form, the EFB was a two headed mutant, thanks to the Greens it was tempered into the anti-plutocracy limitations a modern democracy needs, much to the fury of the wealthy who wanted to use their wealth to influence this years election, and the 150 people who dragged themselves quietly down Queen st shows that this issue is dead, but the Herald feeding that with a lie like 500 people shows how desperate the Herald is to keep the issue alive. Remind me again Mr Herald, a piece of legislation that restricts advertising in an election year – isn’t that going to hit you in the pocket? It’s your profit line you care about Mr Herald, not ‘Democracy under attack’.

You're just jealous that Lincoln Tan has been promoted from Monday columnist to issues like this reporter at large.Get over it mate!

... street protests were broken up by ranks of baton-wielding police. The worst incident occurred in Auckland on 1 June – dubbed ‘Bloody Friday’ – when police violently dispersed up to 1000 marchers in Queen Street. One victim suffered a suspected fractured skull, and 20 others had to be treated for lacerations, concussion and bruises.

But that of course was bloody repression the NZ herald supported being in 1951.

And all because the wharfies refused to work overtime.

Stop attacking the Herald and focus on some of that $40.00 a month rental for broadband from Telecom being dished out to the best websites like your own mate!