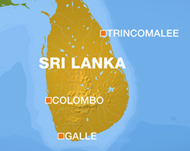 I do wonder why sometimes the crises in Sri Lanka doesn’t get more exposure in the mainstream media. The problems are intense, and as this report shows, getting more desperate - but my guess is that because it doesn’t involve white people or the West invading, the story sinks to the bottom of the heap.

Sri Lanka conflict traps thousands
In what aid agencies are describing as Sri Lanka's hidden emergency, about 30-40,000 refugees fleeing from violence in the country's north-east have become trapped in the middle of a war zone.
At the small seaside town of Vakarai, 50km north of Batticaloa and controlled by Tamil Tigers, aid workers and locals are struggling to cope with an influx of panicky, exhausted people.

"There's not enough food getting through and there is very restricted access to these people for aid agencies."

For help to get into Vakarai, it must pass through the frontline in fighting between the Liberation Tigers of Tamil Eelam (LTTE) and government forces, with only the UN and the International Committee of the Red Cross (ICRC) allowed to go over.

As of October 16, the UN reported 36,716 Internally Displaced Persons (IDPs) in Vakarai, most of them Tamils who had fled from fighting in and around the northeastern city of Trincomalee, earlier in the year.

Anil Rajapaksa Says:  November 11th, 2006 at 4:06 pm
Raviraj was gunned down in front of a military barracks during the morning rush hour when large numbers of police and troops are deployed at virtually every key street junction. This is the work of paramilitaries operating with the Sri Lanka Army.


But mahinda Rajapakse the Terrorist leader of the Terrorist gang-Government of Sri-Lanka immediately jumps up as if he is the most honest, just and peace-loving man on the entire planet proclaims we will have Scotland Yard; for what; to fool the world? How dare you call for these kinds of inquiry and investigation when you yourself know the truth? You are the murderer; you are behind every murder, of the Tamils of the Tamil Homeland. How dare you twist your tongue!

You have imposed food, medicine, fuel, and cement etc. etc. etc. embargo to Tamil Homeland. You do not even allow the volunteers and foreign doctors, NGO aid workers serve in the affected areas of Tamil Homeland, what kind of barbaric inhumane you are, utter shame for you to call yourself a Buddhist; for Buddhism teaches compassion. But you, the Head of the Terrorist gang (government) deprive even the basic rights of the minority Tamils. You have equally violated the cease fire agreement for many, many times and still continue to do so by closing the 9A road, and by your Air Strike and offensive aggression for one year. Sometimes, some don’t believe what Sri-Lankan government has been doing; for them let me quote, please refer the entire article and the rest on the internet.


You are a hypocrite, you are a congenital liar, you are guilty, you are the criminal and you are the culprit. You and your corrupted government - the Racist and the Terrorist Ministers deny everything and accuse others, and blame others. But in fact you yourself are responsible for every abduction, kidnapping, disappearances, displacement of more than 200, 000 Tamil civilians, and the murders of innocent Tamil civilians. In the name of terrorism you destroy the Tamil Homeland. You have contaminated, you have polluted, and you have rapped the Tamil homeland. And you are the number one Terrorist on the entire planet.

If you were right, if you were sincere, if you were just, the country would not be in this situation today. Within one year, since you became the Head of the Terrorist gang government (your power hunger) you have brought the island into chaos and into pieces. Within one year you have shown your menace and your barbaric attitude and behavior. It shows crystal clear that you are terribly corrupted, you are a mass murderer, and you are war monster and war criminal.

We know the Singhala Buddhists do not believe in God, and therefore you have no clear conscience, and you are ignorant of moral or ethical principles and values. You know only the JHU (the narrow minded, fanatic, down South Buddhist Monks and the JVP - Terrorist gang and their doctrine and their teachings. I assure you, the suffering and the innocent blood of the minority Tamils will not go in vain.

Government Terrorist leader Mahinda Rajapakse, kehalliya rambukwella, kohana palitha and the rest of the Terrorist gang-government shame on you, you murdered MP Raviraj this year and MP Joseph P. last December when he attended the Christmas Service in the Church, with the help of Paramilitary, and you Terrorist Military forces. You deny, you lie as you usual that are your second nature. You have no conscience and no respect for Church, or Hospital or School, or refugee camp. Please don’t pretend, as you do not know any thing. Examine your conscience, if you have one within you.