David Farrar's partisan sophistry and abuse of statistics is usually ignored on this blog because of the sheer volume - rebutting the nonsense over on his blog means it would be an overwhelming exercise.  But every now and again he just goes off the chart.  And then I get to use this image: 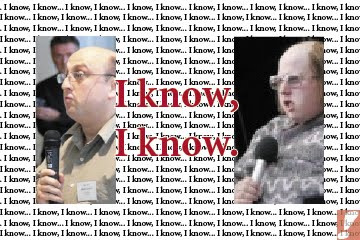 The really funny thing about this is that he runs an opinion polling company so he would have known exactly how self-servingly flimsy this sounds when he wrote it.   His Kiwiblog post in full:
---

May 15th, 2014 at 9:00 am by David Farrar
Stuff reports on their Ipsos poll that only 21% of adults said the Budget should see a big increase in spending, 51% say the current spending levels should be maintained and 21% say spending should be cut.
So 72% are against increasing spending beyond current levels. That’s excellent for those who believe in fiscal restraint and a rejection of those who propose big tax and spending increases.
---
So, from a poll that is precisely split in half he grabs at his preferred outcome by lumping the neutral number to his side.  Glass half full man, obviously.  Dumbest spin I've seen in ages.
If you go to the Stuff story you will see there is no "big" spending increases, just increases - in the same way there is not "big" decreases either, so he is fibbing on that point plainly and his headline is just wrong.  Small v. big increase/decrease wasn't asked.  Anyone can just as well say that 72% are against decreasing spending beyond current levels.  And anyone can then conclude that's excellent for those who believe in fiscal expansion and a rejection of those who propose big tax and spending cuts.
The poll question has a limited merit, but it isn't that useful either, which may be why it was asked and why Farrar is spinning a line with it.
---
Q. What should government do for this budget?
The financial books are forecast to return a modest surplus to the New Zealand government.  For the upcoming budget should the government...
* Maintain current levels.
* Increase spending.
* Decrease spending.
---
The question is really about the surplus so should have been stated as such with the relevant options, eg.
Q. The government is forecast to make a modest surplus in the budget.  How should this surplus be used?
* Reduce taxes
* Reduce debt
* Increase services
* Increase infrastructureassets
[For these answers I have removed the usual pejorative words employed in favour of more neutral terms, eg. would usually classify as: tax cuts, paying off debt, spending on services and investing in infrastructure.]
[UPDATE: Thinking about it again, assets is a better term than infrastructure because Super Fund contributions etc. is included - one of the likely recipients of the surplus regardless of who is in government. Repaying debt is probably the default neutral position in this continuum, in which case to replicate the stuff poll of three options the answer either side of 'pay off government debt' would be 'reduce taxes and charges' and 'increase services and assets']

What an idiot. This is especially spurious given that the govt have reduced spending to one of the lowest rates in the OECD... 72% would oppose that, using Farrar's strategy. http://thestandard.org.nz/nationals-proposed-public-spending-to-gdp-ratio-the-elections-clear-blue-line/

In fact the numbers are exactly balanced, and weighted towards keeping things the same. But that would probably be the same whenever you asked the question.