State of the Nation: Kelston Cunliffed

500 people at least were at David Cunliffe's State of the Nation address at Kelston yesterday where Labour's Best Start policy was announced.  I was there too.  It was packed in the end, standing room only. 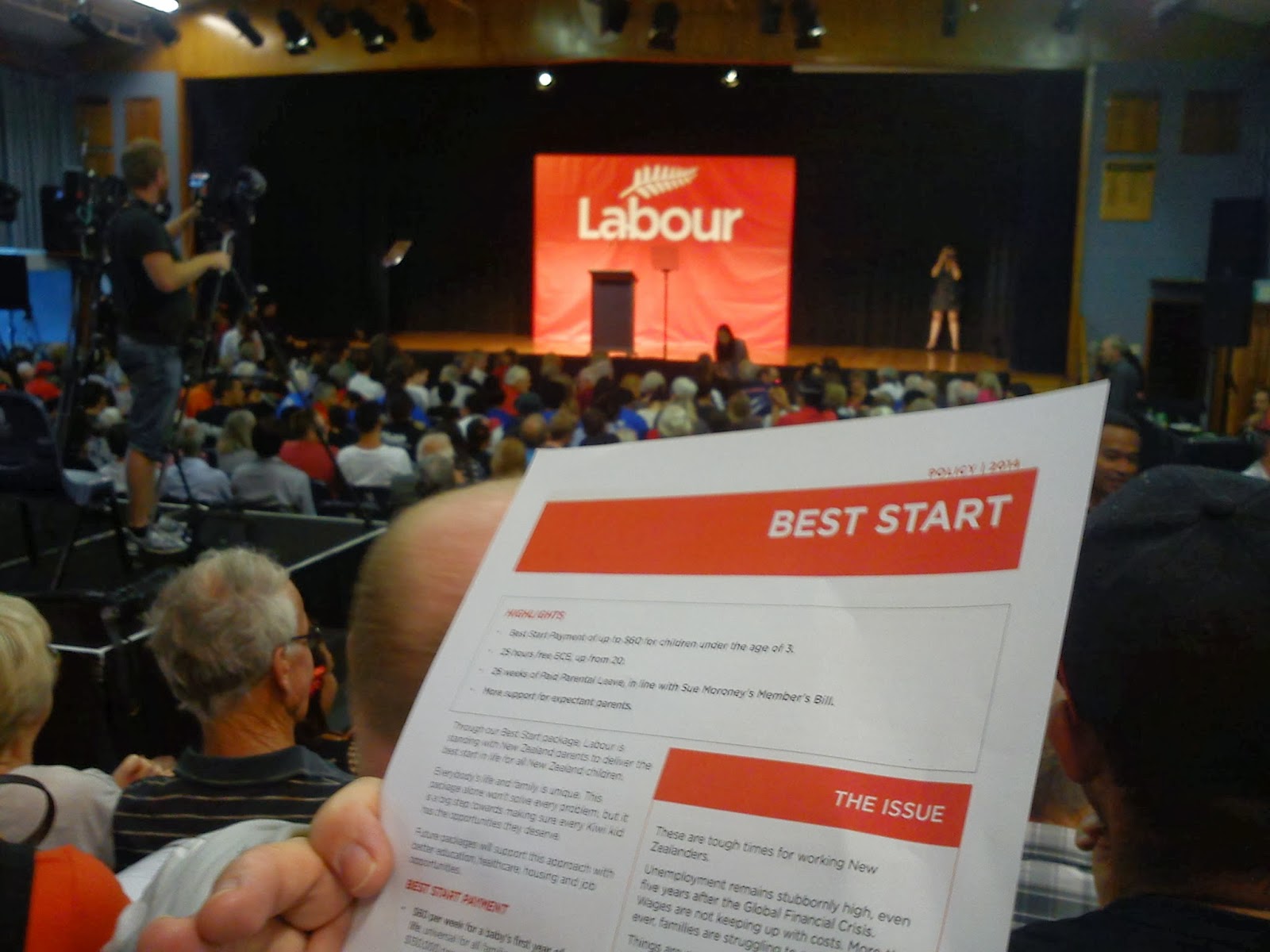 Cunliffe was well received.  He delivered a solid speech, connected with the humour, substantiated a left position with a hard commitment spelled out in dollars.  This swelled confidence all round.

He never lacked for self-confidence.  He may have bouyed and energised and he may well be the most smooth and professional communicator Labour possess, but he hasn't quite shed the smarmy, Cheshire cat grinning, smug, cocky, sales spinning persona that still unsettles.  He did relaxed really well on the Paul Henry Show interview last night though, which suits him better.

These presentation wrinkles need to be ironed out.  It's part of who he is, I suppose, so it can only be suppressed.  For example the habit of the half-laughing/chuckling reply has to go.  It shows defence and fear and deflection and flippancy - people can see through it after a while.  It is a phoney laugh - laughing it off - either they are lying or are embarrassed.   Like the awful automatic laugh response anyone on radio suddenly gets when a mic is in front of them (you never get these fake laughs with people on the radio who are on the end of a phone) it has to be unlearned.

As for the policy package itself - it is a move in the direction his supporters expect and have waited for.  Giving $60 a week to working class parents with infants is the sort of financial relief - compassion - demanded after austerity-style tactics by the National government.  Making sure unemployed parents get something after National's targeting over the last five years of the working poor cannot happen too soon.  Apart from the criticism it is not going to rolled out fast enough, the main issue seems to be that it gives parents up to $150k pa a baby bonus.  But they could not just restrict it to the most needy as the votes are in the centre.  It is a deliberate embracing of the middle income earners - the parents amongst them would be much better off with that $60 in their hand every week than the alternative tax cut spread and diluted to the non-"breeders".   The dedication to early childhood education and especially the establishing of centres in the neighbourhoods where the demand exists also got a huge applause as did Moroney's paid parental leave bill. 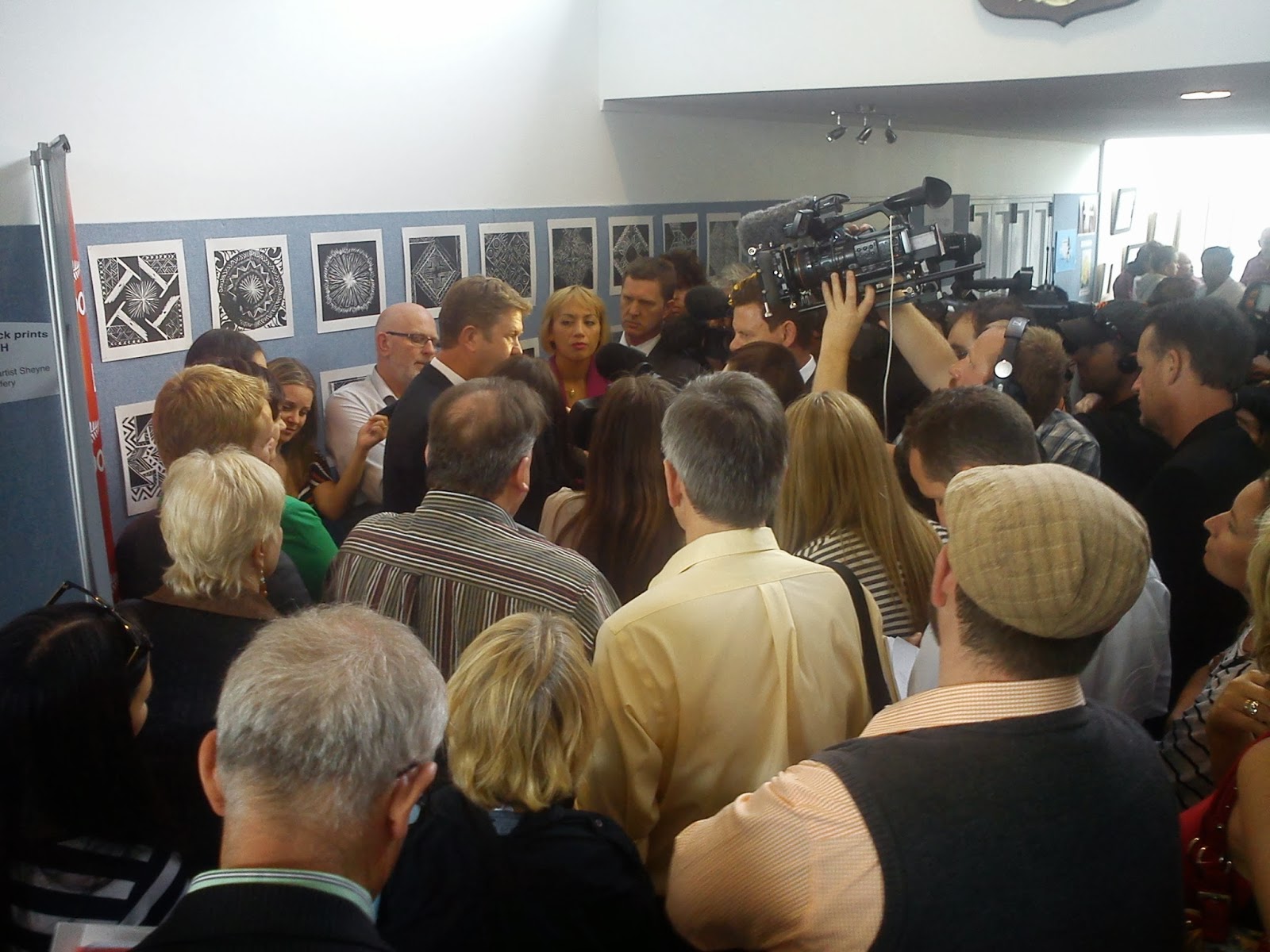 The meeting audience had all sorts of people - representative of groups that compose the modern Labour party in Auckland: Indian, Chinese, Tongan, Samoan, Pakeha, young, old, women, men.  It was a diverse audience reflecting a diverse membership in an increasingly immigrant-driven metropolitan city.  Now look at the picture above which I took of the media scrum at the post-speech stand-up.

There seems to be precious little racial diversity within the media organisations.  The gallery and editors and reporters aren't exactly a gathering of the UN - it's more like an Imperial Conference.

Usually the only non-European people in media are to be found working for "ethnic" media.  The term mainstream media is often used as shorthand for the "old" corporate, government and established pre-internet media; but it can just as well apply as a euphemism for Pakeha media.  Political reporting, and pretty much every other sort of reporting and analysis in New Zealand, is thus middle class white people having conversations amongst themselves about their interests from their own perspective, bound by the insular conventions and thinking of the ruling white elite of which they are attached as a symbiotic, or parasitic, colony.  A colony within a colony within a Colony - within a hive.