In probably the least successful succession strategy in political history Te Ururoa's undermining and ambition - aided by President Pem Bird - has finally reaped the bitter dividend: Pita Sharples is to step down. Are they happy now? They became apologists for the Nats in order to keep their baubles, they got rid of Hone because he was the obvious alternative leader, and their candidate just came in third to Mana's second place in a by-election in a safe Labour seat. 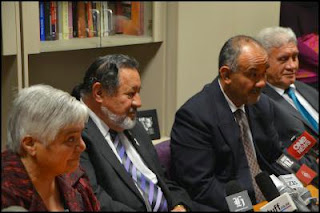 [Scoop photo from here.]
This leadership change - as dignified as a coup could be - is perhaps the killer blow to John Key's Maori Party.

NZ Herald:
--
Prime Minister John Key said Pita Sharples has made the right decision for the Maori Party by resigning as the party's co-leader.
Dr Sharples confirmed at a press conference this morning that he'll step down, saying it was for the purposes of unity in the wake of uncertainty over the leadership.
"The best thing I can do is create a space for change to happen."
He said he would stay as Minister until the election, but did expect to relinquish some of those responsibilities to his successor to allow him to have the mana of the role before the election.
He would also stay as a supporter and a leader within the party.
He made his decision with a "heavy heart."
--

The way Sharples has been treated within the party is unacceptable and the disunity is florid and apparent to all.

Sharples is stage-managing his withdrawal, but it is with the help of National.  Flavell is already deputy Maori Affairs committee thanks to National. My pick is that - fulfilling a Ngata-type role he likely aspires to and letting Sharples assume the role of mentor - Flavell will be appointed parliamentary under-secretary to him in Maori Affairs and maybe also to Turia with the Whanau Ora portfolio before Christmas.

Nat PM he already talks to Mana, you already know that Maori is a whore ready to be suckered,vote here for Nat NZ

going to be interesting Tim, don't put anything past John Key, we are stupid as you know , we are New Zealanders and we prefer not to think