Keep Auckland Moving website and the group's report is online. 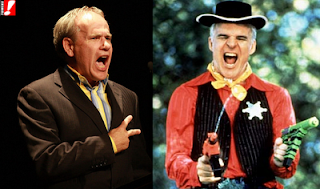 Mayor Len Brown, the ideological clown, has sided again with the business lobby and the upper and middle classes against his working class supporters - just as he did when he backed the management over the unions at the Ports of Auckland lockout - this time he's bought the roading lobby's spin and is backing the pernicious cocktail of tolls and road charges to fund Auckland's transport needs.

NZ Herald:
--
Aucklanders face heftier transport costs under either funding option put forward by an advisory group to Mayor Len Brown, but road charges are picked to provide better payback.
[...]
The 17-member mayoral group - on which business and union leaders have joined transport campaigners and the Automobile Association - is trying to build a consensus among Aucklanders while asking them which option they would "prefer" before it makes a final recommendation to city councillors in July.Mr Brown is not saying whether he will call a referendum on the issue, which centre-right councillor Cameron Brewer insisted yesterday should be held during the local body elections in October.
--

He should call his bluff. But the wording of the options and what it envisages is crucial. Probably too dangerous to contemplate though, that's why Brewer is having a poke. I heard the Mayor saying he was now in favour of charging people for using the existing roads. It must have been on radio because I can't find the statement online, just an official release about the report.

Len Brown says:
--
"I would encourage Aucklanders to look at the report and have their say as part of the consultation process. We all have a stake in Auckland's future, and our ability to move freely and easily around the city is clearly an issue that touches the lives of all Aucklanders."
--

No-one will be able to "move freely" if there are tolls and charges set up across the city. They will move expensively.

To the better off - especially the company car mob that would have all the deductable and GST-refundable tolling bills picked up by the firm anyway - the term freely means something different than it does to the plebs who are planned into what will be a bus-dependent future (see Auckland Transport Blog on the disingenious bus proponents). No more shit heaps clogging up the road - or at least the roads they use - that's how they see the solution to congestion. It is basically unfair and I would hope people reject the concept.

What I see and hear is more evidence that Len will line up with the big knobs instead of taking on Wellington where most of the problems lie.

On the issue of Auckland public transport I say again for the quazillionth time:

The problem is the transport funding is aggregated to a quasi-political group (Auckland Transport) so that the most difficult, costly and longest timeline to build (ie. rail) will always be sacrificed for shorter-term, easier and cheaper options (that will only be marginal improvements but never the best option). Until there is a separate statute establishing a rail authority for Auckland specifically mandated to build and operate the rail system over 50-100 years and mandated to strike its own rate based on the capital costs of the system (and limited to a 1.0 rate for properties within 1km and maybe a 0.5 rate for properties 1-2km from a rail station) then rail will always come last on the list.

Dooming the city to run on bloody buses forever is not an option - it just adds to the road congestion. Only a sustainable and independently funded agency for rail will have the focus and long-term planning ability to complete the task and operate the system. What a shame no-one in a position to do something has ever promoted that idea.

NZ Herald:
--
First Union secretary Robert Reid, representing unions on the mayoral group, said the Government's refusal to join the panel had made the exercise more difficult and turned it into a case of "what Aucklanders can do by themselves to get the changes and transport project which the Auckland Plan calls for".But the Government would sooner or later "have to come to the party".

And the context to all this congestion is not just the under-investment and mal-investment by successive governments and Auckland authorities either, the reason mega billions have to be found is because the city's population is planned to rise by some astounding figure - a million additional people over the next 30 years.

The fudges the officials are trying to sell the public revolve around deliberately underestimating the impact of immigrant flows. The unique aspect of the ethnicity figure in the Auckland Plan, for example, was it was the shortest projection by far in the whole 300+ page document at only 9 years, when everything else was 20, 30 or 40 years. They are trying to hide something that is as plain as the people in the street. And what a crowded street it will become.

--
The problem [transport] is going to get much worse. One new Aucklander is being added to our city every 20 minutes, giving us a predicted population of between 2.2 and 2.5 million by 2041
--

They are trying to assert that most of this million people will be births and people within NZ migrating to Auckland. This is so obviously false. With the natural increase being so low there is no way internal migration will make up the numbers they claim. - it is spurious. The vast majority of the million will be immigrants - most of whom will be from Asia, mainly China and India - that's the sort of facts they aren't keen to publicise. They seem keen enough on the raw numbers though - as if it were a triumph and uncontroversially a positive thing - as if they were actively aiming for a million rather than having it imposed by Wellington as a fait accompli.

Congestion is the symptom, mass immigration is actually the problem. We add more people than we can cope with and that is unsustainable. We are in a permanent infrastructural deficit. One of the more obvious answers in this situation is to stem the demand for the scarce transport resources, ie. less immigration. Cutting our meagre cloth for a whole lot of other people who are about to march in is not the best way to make a suit that fits.