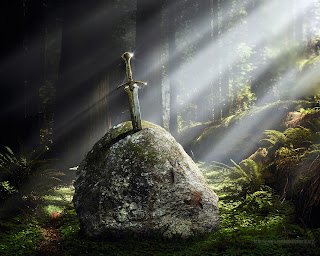 What's the bet Prosser calls his pocketknife something ridiculous like 'Excalibur'. Or 'Little Elvis'.

Richard Prosser's absurdly racist diatribe against Muslims because his pocket knife was confiscated seems like the actions of someone with far too much attachment to pocket knifes.

I once had to remove my belt going through airport security, which was annoying, but didn't lead to me wanting to launch a jihad on Islam.

Unless Richard Prosser's pocket knife was magical, made of gold with sapphires set in the handle & gifted to him personally by Queen Elizabeth the second, he's a racist offensive clown who has no place whatsoever in Politics.

Watching the main political parties damn him but then quietly agree they would still cut a deal with his party isn't the kind of strong ethical stand point many of us would have liked to have seen.

Initially I just believed that this bullshit racism was just too limited and so 2002 to have any real impact, but to my horror, I now think that maybe Kerre Woodham is right.

I know, I was scared by that conclusion as well.

I have heard a terrible rumor circulating that several internal polls run by different political parties are showing a large jump in support for NZ First off the back of Prosser's absurd comments.

Maybe the dark side and ignorance of NZs psyche is not nearly as dead as I had hoped.

Out of all the minorities our political parties choose to attack, why can't it ever be the richest 1%?

Maybe the dark side and ignorance of NZs psyche is not nearly as dead as I had hoped.

Well obviously not. Had you already forgotten that they RE-ELECTED John Key!?

^ It's not so much that 'we' re-elected* jonKey, so much as 'we; failed to elect anyone else.

*perhaps the phrase 're-anointed' is more suitable, given the fawning attentions of most of the 'news' media...

"Out of all the minorities our political parties choose to attack, why can't it ever be the richest 1%? "

Probably because the 1% keep their heads down; remain invisible; and out of the darling public's short-term attention span.

After all, September 11 is now synonymous with Trade Centre towers and images of airliners crashing into them; and massive structural collapse.

Like the burning of the Hindenburg Zeppelin, and the oft-quoted,

Such is how the human pysche seems to work; keep out of the public's attention and do your evil work (Dr Moriarty, Blofeld, the 'Illuminati'?) - or get in people's faces in a way that the collective memory will never forget?

The 'trick' is to reverse this and bring the socio-economic terrorism of the One Percenters to the fore...

Lie low and work the levers behind the scenes. A bit like Dick Griffin does at Radio New Zealand. Nek minit, CEO Cavanagh steps down. Control the media, its that easy. Ask Mr Murdoch, or John Key. Or Muldoon, "feed em horses**t and keep em in the dark". Looking forward to your reincarnation and resurection BB.