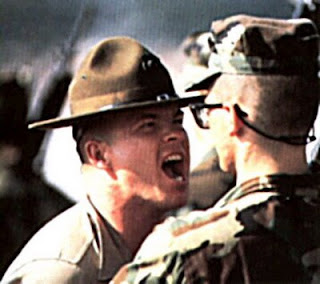 So not only do bootcamps not work & seem to produce fitter reoffenders, they now bash the teens sent there as well? Unbelievable...

Teenagers assaulted, abused at boot camp
Troubled teens sent to government-run boot camps were abused and assaulted by military personnel tasked with turning their lives around.

Two military staff have been through formal disciplinary proceedings, one step below a full court martial, over treatment they meted out to teens on the camps.

...it's interesting to me that this story didn't really get much attention, because it has all the ingredients doesn't it? Military personnel charged with bashing troubled teens who are forced to participate in boot camps has all the necessary news hooks, but it didn't really get noticed.

I think it's because it's not really the news people want to hear. NZers want to hear these troubled teens are getting a little roughed up, because in the minds of the sleepy hobbits, that's what these kids need, bit of discipline and they'll fly straight. Having to be confronted by their short term knee-jerk redneck bullshit boot camps not working, and the word assualt getting banded about, is outside the talkradio paradigm they are simplistically viewing this in.

Boot camps don't work. Boot camps actually create fitter reoffenders and now we have Military staff assaulting these teens. The whole messy, smelly, infected thinking that generates social policy like this doesn't demand much accountability, and that's why news that these boot camps are sinking quickly get ignored.

National have seized upon the uneducated rump desires of their voter base to punish these kids without bothering to check if such puritanical populism even works.

It's a Banana Republic with an extra side order of banana's.

“It's a Banana Republic with an extra side order of bananas.” Ha-ha! Make that a generous side order of stinking rotten bananas more like it.

Where the sickos who support this type of garbage get the idea that military discipline straightens up wayward youths is nuts.

I’ve heard extensive anecdotal evidence to the contrary of how disciplined the NZ Army is from a former brother-in-law who was in service during the 80’s and early 90’s.

Drug use was rampant - he even said that was the whole reason some joined - also stories that he was aware of many who used child prostitutes during overseas deployments. After hearing such anecdotes, it leaves a lasting disgusting impression of that lot. Military discipline my ass! F**k the army! F**k the boot camps!

With the damage done to this country by successive governments over the last three or four decades and no sign of easing off, to start to make a difference crap like this should get the boot to start with, a total waste of money. That money could provide better outcomes going towards feeding the 270k kids out there.

Want to instill discipline in youths? Give them jobs that can pay enough to live on plus use toward building a solid future. Make education more accessible instead of all the cuts National is responsible for. Putting wayward kids through boot camp then throwing them on the garbage heap that’s life for many is complete nonsense.

Boot camps probably only make youths comfortable with the idea of an institutionalised life whether it’s boot camp now or a working prison later, this government isn’t offering much elsewhere for these kids.

What it really all comes down to is a change in this rotten system. Governments like this offer no salvation for those having it tough – they only make life tougher. Youths on the tough end should be politicised, make them realise who’s ruining their lives and counter accordingly, instead of the status quo of being plonked in some hopeless prison or nonsensical world of gangs and the like.

It’s a big ask, but making these kids politically aware can only come from our ranks not those above. Kids shouldn’t have the conviction they’re a failure, but realise those at the top (our “leaders”) are the failures, they deserve the boot. Something that maybe The Daily Blog could try and look at.

This is the problem Bomber. The masses have little or no understanding of what these institutions do so long as our collective vengeance is seen to be metered out.It has nothing to do with justice.
I spent the morning talking to a 17yr old girl who was initially sent to prison , yes prison, for basic unlawful taking charges x2 and driving offenses.He first taste of incarceration was with a convicted female murderer,have to take her word on that one. With no criminal history for violence I thought this type of sentence wasn't going to happen anymore. She gratefully acknowledges her release on Home D given by a judge that actually cares about young people and how the system should work.
People need to understand all you as a society do when punitive vengeance is handed out is to create harder people.