The Labour Party, David Shearer's leadership and the politics of caution that are failing them both 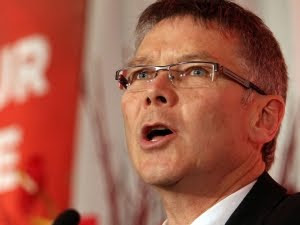 David Parker to the rescue?

National up, Labour down in new poll
The Roy Morgan poll, conducted in the first weeks of January and released yesterday, shows support for John Key's National Party was up half a per cent to 46 per cent.

Support for David Shearer's Labour Party was down 2 per cent to 31.5 per cent.

Pundits were quick to claim that Labour's nudge up in the polls last year was because of Shearer's butch routine with Cunliffe. The idea that we are all secretly political masochists who love a sadist for leader isn't a new one but I argued at the time that this was a terrible conclusion to draw and that what Shearer had managed to do with his promise of 100 000 'affordable' homes for the children of the middle classes was pierce through the news cycle with actual policy NZers are screaming out for.

Housing affordability is a massive issue for middle and working NZ and what Labour managed to do with his speech is lift genuine interest in the Party, the policy was recording 70% support.

The decline in the first Poll of the year won't be helping with Shearer's confidence issues however. Part of the problem is the methodology of the Polls which by the day become more and more biased as fewer NZers have landlines and part of the problem is Shearer's inability to connect with the 800 000 mainly Labour Party voters who were enrolled last election but didn't bother to vote. For them the Party simply isn't left enough and Shearer's following of Pagani Doctrine to reach out to National voters with beneficiaries on roofs anecdotes (which embarrassingly turned out to not have even happened) were a major turn off that spawned an open revolt on the blogs.

Luckily for Shearer, he gets to restart his flawed first year with a new policy direction speech. Chris Trotter has been publishing some damning blogs of late looking at Shearer's early bromance with private mercenaries and his flirtation with privatization of war. While I don't share all the conclusions Chris reaches, I do think it does show how ideologically malleable Shearer has been in the past and shows how important it will be in the future for him to have far better advisers than he has had. It also means that voters have to force Labour to promote better policy.

While the weight of opinion for a more interventionist Government role is building...

“Over 70 per cent of Kiwis endorse KiwiBuild – our policy to build 100,000 affordable homes in 10 years. Around 60 per cent of New Zealanders support both universal KiwiSaver and our prudent policy of steadily raising the retirement age to 67. And today it’s shown that 55 per cent support a capital gains tax.

...the reality is Labour have to be forced to do anything progressive because their ridiculous caution always holds them back. NZers will be demanding more from Labour and the blogs will be relentless if Shearer doesn't lift his game.

I don't think we can appreciate how spooked many in Labour had been by the loss in 2008. The Politically Correct Nanny State bogeyman created by National in the wake of the repeal of section 59 alongside Labour's refusal to slaughter any of the free market sacred cows left many MPs burnt by the idea of an interventionist Government.

Labour did not comprehend what was happening to the free market's sacred cows in 2007 as the financial markets crashed (but then again neither did those running the response). They didn't understand that the foundations of neoliberalism that had been cemented into NZs economy were open for challenge and so didn't bother to challenge them.

Parker has an agenda for a far more interventionist Labour than he has been letting on, the question is whether Labour's natural caution will force him to backdown.

The ball is in Shearer's court, he and Parker better be ready to serve.

Now is the time to be bold.

Perhaps the word "interventionist" is a right-wing framing of the word "effective" or "active"...or even maybe "governing".

I mean, someone who doesn't intervene, really, could be accused of "doing nothing", which seems to be what this Government is about. Leaving things to go to rack and ruin.

...Bomber, you would be more capable than I, of listing the forms of non-governing NZ has experienced since our "non-interventionist" government has had its hands [off] the wheel...and, yeah, the list is endless really innit?