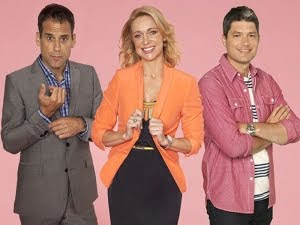 Head of News and Current Affairs Ross Dagan says the Seven Sharp presenting line-up is an experienced team with strong journalistic pedigree, who collectively personify all of the attributes of the new show.

Hmmm, this has all the ingredients of a train wreck doesn't it?

The reality is that this programming decision is a cost cutting exercise away from expensive current affairs shows to cheap lite entertainment. It would be the much lamented death of intelligent television if Close Up wasn't already so brain dead when the plug was finally pulled.

Here are the problems. When these types of panel shows work overseas, they work because there is a genuine subversive quality to them. I think we can all agree Seven Sharp won't be subversive, it will be very, very, very news lite.

Imagine Ana Samways from the Herald's sideswipe column interviewing Barack Obama. That will be Seven Sharp.

Jesse Mulligan is funny on 7 Days, but 7 Days is dick jokes and poo jokes. That's fine 10pm on a Friday night for Nigel no mates at home on the couch, but you can't be pulling that shit at 7pm on TV One. Maybe TV2, but certainly not TV One. If Jessie tries to be a bit too clever, he'll find out how quickly the word 'ideology' frightens Executives.

Greg Boyed has the most to lose here, he's actually a very good political interviewer. Watch for the glint in his eye start to die when he realizes the credibility eroding disease Seven Sharp slowly becomes.

The only delight in including Ali Mau in the line up will be watching Simon Dallow's face when he crosses to her each night. Her inclusion on Fair Go seemed to drop that shows targets down to tradesmen who didn't advertise on TVNZ.

The winner from all of this will be John Campbell who can expect a flood of new current affairs viewers fleeing TV One.

Now if TVNZ had announced the show was to be hosted by Wallace Chapman with Pebble Hooper and Jose Barbosa, then I'd be tuning in with delight, but this looks like it will be a painful writhing thing that will terrify Executives if it is too clever and subversive or anger audiences by picking the wrong tone on serious issues.

Expect a lot of flash mob bullshit, the Prime Minister dancing Gangnam styles and Greg sobbing as his career melts before his eyes.

On the positive, this desecration could be the final thing that forces NZers to call for better public broadcasting.

For those wanting harder questions than Seven Sharp will provide, FACE Television launches Sky 89 & Auckland UHF February 1st with PBS News Hour, DW Journal, Aljazeera News Hour & Citizen A. You can like it on Facebook here.

Your praise of Greg Boyed is misplaced. He is as vapid and uninformed as the rest of those Television One newsreaders. During Israel's recent escalation of its ongoing violence against the people of Gaza, Greg Boyed doggedly read out scripts that may as well have been written for him by the IDF itself. He never so much as raised an eyebrow; something that even American newsreaders occasionally have the grace to do.

@ Wally .... I wouldn't necessarily be so harsh on the likes of GB.
It's the nature of having to earn a crust and being employed, AND being employed by an utterly munted TVNZ.

It's the nature of the current 'regime'. In a truly PSB environment, the likes of Boyed and even that fella who does Breakfast (whose name eludes me) are OK.

I had hoped that Curran might make the appropriate changes after election time that will destroy the TVNZ commercial culture. However, now I realise what a self-serving, over-ambitious, "I've paid me dues - so I'm entitled" 'person' she is - so I'm not holding my breathe there either.

oh........and btw Bomber: "liking" shit on Facebook is probably part of the problem. I'll watch anyway but the very last reason I will isn't because I can LIKE it - it's because it'll probably be the ONLY thing going.

"For more serious interviews.....!" Watch FACE! SKY! No way. Switched off TV and now on the internet and DVD'S. Waiting for a decent PBS to consider watching. I'm with you BB on the MSM.You are doing great work but I do wonder when you are going to sell out.KIA kaha bro.

The one thing I can guarantee is that Seven Sharp will be Pro-American-Corporate and pushing American foreign policy as TVNZ wallows in dirty advertising money .
Who cares about your own country-people aye TVNZ ? You fucking traitors !
And as for all you fancy TVNZ reporters , well you can go fuck yourselves you cowards ! If you lose your jobs , you can always pimp out your sisters on K Road . And you’d turn a blind eye to the first politician seen dragging her off down a dark ally .

For me TV is quickly being rendered obsolete before its time due to government ineptitude and corporations that simply can’t deliver what many in the audience desire.

I thought with the advent of Freeview we were entering a possible golden age of TV, for a moment it was great, but how quickly did it falter when ulterior motives from government and corporates kick in.

For me it’s the web all the way.

While I understand the difficulties of Triangle TV’s future with the DSO, I dislike Face TV not only because it’s behind a paywall but also because of the idea we may face a boastful Key using it as an example of market forces addressing a need.

Lobby and succeed in having Face TV on Freeview and it will restore some of my faith that there’s still worthwhile TV.

Still, the web is light years ahead and undoubtedly the future.

@ Phil . Waiting , watching and doubting the good intentions of others is a roger douglas legacy . He deposited mistrust into our political system and is still spreading doubt from beneath the skirts of ACT . It amazes and horrifies me to think that , that rusting , traitorous carcass is still being paid my taxes to lead me down a dark garden path . But oh well . Never mind aye MSM . At least there's only 270 k poverty stricken Kiwi kids that you can avoid in the car you drive worth more than a house in Otara . It could be worse . It will get worse .

Bomber Bradbury and his colleagues could indeed be Machiavellian and treacherous , They could indeed be scheming and colluding with corporate NZ’USA Land ( Phonetically Nizoosa ! ? Sounds like and evil land from an old Flash Gordon movie . By the way , anybody seen ‘ Ted ‘ ? I laughed my empty head off . It was funny right ? I have no fucking idea anymore .)
There’s this book what’s been done writ . It’s about co-operative spying during WW2 . Sorry , can’t remember the title . It’s about just how extraordinarily complex the spy systems were then . Oops ! Just found it ! ( http://en.wikipedia.org/wiki/Operation_Fortitude )

Germany was sending hundreds of spies to the UK to learn the un-learnable about the unfathomable British and their random approach to logical thinking which no German can do of course . British intelligence knew were every one of these Jerry scoundrels were and played them like fiddles . Consequently , all the German armies were on high alert for a sea invasion . Trouble was , they were all waiting at the wrong location .

Given the relatively non existent ability to communicate back then compared to what was achieved was mind boggling . The lengths to which men and women went to , to protect and to serve their various causes and allegiances was astounding to say the least .
Now , in a day where no one really gives a fuck and so long as they have a cold beer and a hot missus so who cares right ? Imagine how easy it is now to apply those same methods of misinformation to confuse and disperse you and I . The enemy .

Tumeke could well be planning a journey to the Dark Side and I must say , when Bomber tells it like it is ‘ From a very , very , very Auckland perspective ‘ I cringe as hope drains from my body .
But then he bounces back and I forget then all is forgiven . So far , so good .

@ Procrastinator ;
The Net is THE tool of the 21’st century . Having said that . Imagine the chaos if it were to be suddenly taken away ... You can guess where I’m going with this .
There’s an old psychological tool applied to junkies in rehab .
Get them in there and strip them down in every sense of the word then as the addict starts to recover and begins to move into normal life within the program they’re given relatively simple rewards . It could be a packet of biscuits or a chocolate bar with an hours tv watching . Then it’s all taken away and the addict has to start at the very beginning and it’s done over and over and over .

More crap from Socialist TV, sell it off while it's still worth something.

And on top of the infantilisation of TVNZ, we learn this disquieting news,

Radio NZ on the hunt for next chief executive

Peter Cavanagh steps down as chief executive towards the end of this year, ending nine years as head of the public radio company.

Chairman Richard Griffin confirmed Cavanagh was not seeking another term and the RNZ board would be looking for a replacement.

He declined to comment on the implications of appointing a new chief executive.

However, a source said the board was expected to appoint a new chief executive more amenable to change, particularly over sponsorship income."

The implications of this are profound - National is about to commercialise the last remaining bastion of public service media. It will be the gutting of Radio NZ as has happened to TVNZ.