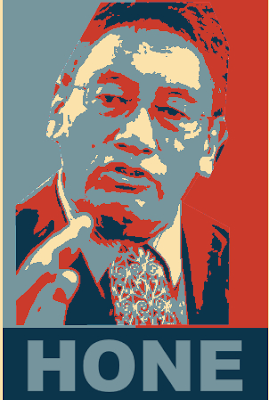 Pita Sharples was thinking about standing down as leader of the Maori Party as the pressure to make a change builds beyond his ability to hold on, but even the MP leadership must know that Te Ururoa represents little more than a fresh slap of paint onto a damaged political brand.

The decision to sit at the table with John Key after he has sold the table shows the vast separation between the Party leadership and its members. The Party knows it is falling to pieces and has lost much credibility hence the unseemly scramble on display now. That so many former and current members have reached out to Hone to retake the leadership shows how rudderless the Maori Party have become.

The problem is that the Maori Party leadership are wedded to National and the right wing policy that comes with that marriage of inconvenience. They either decide to recast the die and reform by walking away from National with Hone calling the shots as leader or they become swept away by the flow of history come 2014.

Forgiveness and unity are strong themes that run deep within Maoridom, whether it is enough to create a new political force remains to be seen. My gut feeling is that the MP leadership can't swallow their pride to allow Hone in to save them. It will be interesting to see how voters react to their stubbornness.

This might be off-topic , I dunno . Fresh off boingboing . Brilliant . This is where's it at baby .

If corporations are people, would you let your sister marry one? -

And welding the MP to Mana should be no loss of face for the MP considering the scope and range of the real enemy . The American Corporate .

Is their take-over inevitable ? Seems so .

What does it mean for us Kiwis ? Born to working parents who will hardly ever see their kids . Kids who will be indoctrinated by a Corporate biased education system to get a piece of paper that says ' Yep , you can do that now . So , off you go then .

The Corporations are coming to take your children away and steal off with your lives . John Key , David Shearer and their freak show minions are brokering the deals .

Yea, I like old Hone actually. He turns up. He puts his money where his mouth is, and really annoys people who deserve to be annoyed.

Unfortunately, to get on TV he basically has to run a script, which goes something like:

1) say something outrageous
2) get on John Campbell's program to explain self
3) say what you actually wanted to say all along.

Which works - he knows he's doing it, the TV people know the score... but a large % of the great unwashed only hear 1)... and base their understanding of the guy on that.

But... I'd vote for him, and I'm not Maori. My natural constituency is Greens - but they're not quite militant enough for the fuckups we're currently faced with.

My last party vote was Mana - along with the Greens, I just don't see any other hope for NZ, that take any notice of the majority of NZ'ers

Whoa there, boingboing. Your sister will make her own decision.