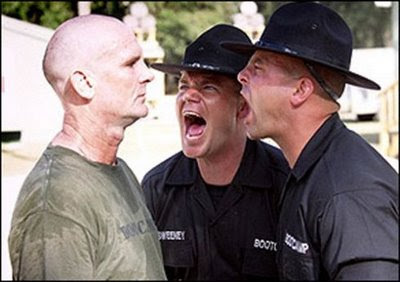 Half of boot camp youths continue to offend - report
More than half of the youth offenders who have been through a Government boot camp in an effort to curb their offending have continued to get in trouble with the law, a report shows.

Ten of 19 youths who reoffended after going through the Military-Style Activity Camps (MAC) committed 126 offences between them within six months of leaving the camp.

So exactly what was predicted to happen with these pointless boot camps has happened - all they've managed to produce are fitter criminals with better weapons training.

Boot camps don't work. Most of the academic research shows they don't work and Tumeke pointed this out when they were announced by Paula Bennett in 2009...

$35million for a programme that no academic literature backs up – what a waste of $35million when we are desperate for every cent we can get! BOOT CAMPS DON’T WORK, it’s as simple as that, but in a country were youth are either vilified as boy racers, taggers or yuff gang members, the thirst to see them suffer and get a boot up the arse is so strong that nACTional are willing to throw raw meat policy to the electorate even when they know it won’t do a bloody thing.

...so you would think blowing $35million on boot camps that don't work would be an embarrassing failure. Sadly it is not.

It's been a screaming success. This Government is not about empirical evidence, it's about raw meat reactionary ignorance for their rump voter base. National's voter base hate young criminals and especially hate young brown criminals, as far as National's rump are concerned the fact these crims can still walk and breath is too good for them. The idea of running them ragged through a boot camp pleases National Party spite, and that's all that matters.

The course doesn't need to actually work, and it doesn't really matter that it doesn't, what's important is the perception that young crims are being disciplined and given a hard time in a military boot camp.

Rehabilitation is considered a weak cop out by National rump voters, they want to see these teens in chain ganged orange jumpsuits, breaking rocks on the side of the road singing Old Man River.

This pointless boot camp crap could cost us $70 million and it would still be considered by National as a success in cementing the perception that they are tough on crime.

Just another window dressing piece of crap policy that will be kept for all the wrong reasons.

What was the cost of feeding NZs hungry children in poverty again? A program there apparently isn't enough money for?
This Government is all about control.

Correction: it’s Ol’ Man River, ’cause the singers want to annoy the heck out of eddicated folk.

All that crushing of boy-racer cars was such a bloody success too wasn't it!
The sad thing is though.......what does it say about NZ sussoitee!

Sleepy Hobbits reap what they sow.

It's good to be able to totally disconnect and watch it all (even IF having the occasional "told ya so" thoughts) from a distance.

What a day in New Zillun!:

- Preloadedteen/20somethings ambling down the hill to Courtenay Place to load up more from bartenders that nevce get prosecuted for serving the already totally drunk; bouncers with huge egos thinking they own the town; same old same old ritualistic ra ra ra jeez I'm cool - rolling home at 3am.......

It fails because it wasn't the full measure. Youth in trouble need boot-camp- the real one not this poofy thing- they need job training- any step out of line back to boot-camp. Which part of that is confusing?

Ahhhh , my subversive friends . All of you have one grave disadvantage however ... You're all human-beings . We're an endangered species on this planet . The Plastic People will look back and muse ' Human-beings used to inhabit this planet . They thought art , love , grace , style etc was worth exploring . '

Christmas is looming and it's not our fault . I didn't ask to have to bow down to a mythical deity nailed to a cross . I didn't ask to have ludicrous buildings built to an invisible 'being' who lives in the sky . I didn't ask a big red man to come down my chimney and give my kids stuff they didn't really need then when it breaks they ask ' Santa gave me this present , it broke and I see it's made in China so what the fuck dad ? ' .

And yet we adhere to this myth . And I have to say that's ok . I like the odd myth . ( Seen Troll Hunter ? Really , really good ! ) But when times are tough , the tough should get gracious and kind . Not tougher .

A Democratically elected Government MUST be kind and empathetic primarily . Filthy bennies should get a cash payment of a significant amount at a time of year when the money pimps work their hardest to en-debt us all to see them through including a nice present and a new wardrobe and some furry car seat covers and a pair of nice sneakers and a free movie hire and a bag of good Pot and a packet of tobacco and a bottle ... fuck it make it a crate of wine and a hug . Bennies and the poor need to be told they're ok and in fact everything will be ok so don't you worry about your kids or your old mum . You'll be ok . A bennie or a poor person doesn't want to be a bennie or poor . A bennie is a human being that needs love and a soft approach . I don't give a fuck if some bennies are gangsters , muggers , buggerers , robbers , druggies , drugged , drug dealers , or are doing some dodgy scam just to get by ... They need love and compassion in their dire hours of need . That's what they missed out on thus here they are after all .

Not torture and vilification .

Boot camps are for entertaining the terminally stupid . They fix nothing and only provide a dark and evil thrill for those who crave vengeance in the same way as those braying imbeciles who haunted the gallows of yore for a giggle .This is a season for love but what do we get instead . Hate . Hate and torture from a Government who's primary objective should be to take care of those most at risk . I listened to that fucktard ( Another great word Bomber ! ) from the sensible sentencing trust babbling death-rhetoric . Who listens to that fucking idiot ? Paula Bennett and Judith Collins perhaps ?

Being cruel , hateful , torturous and spiteful to those who are cruel , hateful , torturous and spiteful is exactly the opposite to what's needed for them to be rehabilitated . ( For those interested research the Spanish Penal ( No ! Not as in penis ! ) System . The problem is the Spanish rehabilitation programs DON'T manufacture recidivists for SERCO's prisons .

Us humans need a brand new mandate . We need to break away . We need a new modus operandi . Something like a system that runs in parallel with the current system . Just better . A hyper-democracy ? Something befitting a new species . Humanus bipedalus consumerus fucktardus .

"We need a new modus operandi ."

Teaching civics in our High Schools might be a good start.

Knowledge is power, as they say.