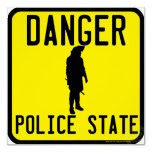 The one sided view of what happened last Saturday at the TPP protest is just another bloody example this year of how manipulated the media version of events can be.

The media weren't even at the protest, most of the footage you've seen are from the protestors themselves because the media outlets are too underfunded to provide journalists anymore. TV3 only turned up at the last minute because they were monitoring the Police frequency and noticed the panicked call for every possible Police Officer available in Auckland to turn up.

So what do we see from the msm? Only all the events that took place after the Police had assaulted protesters.

The Police have no one but themselves to blame for the violence that broke out on Saturday. The decision to lock out of the conference every NGO, Union, Academic and community group who are impacted by the TPP sowed the seeds for that violence. The decision by the Police on the day to not accept the hundreds of thousands of signatures fertilized those seeds for that violence and the Officer who started throwing punches as the protest was winding up and ending was what provoked the immediate response.

The cops are lucky the protestors were so restrained.

We must not let the violence provoked by the Police to remove our focus on what was going on inside this conference.

Tim Groser is applying for the WTO meaning he is negotiating this deal for his CV, he is not negotiating for NZ.

On a final note, I am beyond sick and tired at the manner in which events I've witnessed get retold by a media who seem hell bent on lying. There needs to be a new media source in this country to hold those buggers to account and the blogs can be that vehicle.

Someone might like to leak to Mrs Clinton that Tim Grosser has a potted history. I mean if we are to prevent bene's from getting benefits for cannabis, perhaps it is time for goose sauce gander politics. The USA would loath e that they are having to deal with a dealmaker, and that whole world trade was headed by a man who like some head. Or is the ol' double standards, that pot smokers amount to nothing 'cept me'. He can team up with Dunne and make a joint statement.

Check out the eight of hearts and the eight of diamonds and the august company, 'Nice People' featured in a pack of cards that is reminicent of the Iraq wanted list.

(the writer was arrested while holding the 'pair' up to public scrutiny in High Street, Christchurch. In a vain attempt to ensure that Grosser was exposed, the writer hid the diamond card down his undies, hoping that he would be strip searched, video'd and charged with offensive behavour towards a standing member of the House. The unwarranted arrest for 'public speaking' along with repressive bail conditions was described by the Human Rights Commissioner's CHCH representative on the voracity of arrest, detention and appearance in a court of law after someone complained his/her 3:30pm lunch was made distasteful was 'chilling' of public debate and 'very disconcerting.

And all I was saying was Dunne and Grosser are (a) Nice People who liked their drug illegal. (b) They are your MP's and depend on prohibition (c) the whole world knows, but NZ media pay no heed.

Maybe I should have called CrimeStoppers.

New Media! Absolutely, and you may be part of it BB. There is such a clear lack of balance in our media that something (anything) has to happen. The TV, papers ( note, not newspapers, 'cause they don't have informed news in them anymore), are becoming increasingly irrelevant, fanciful, and misleading. Keep up the good work.

....and btw Bomber FFS! if you could see the numerid image I've just been prevented with in order to post this comment, you'd know why people get pissed off.
I'll punt for a '3', but it could be a '2' and it's probably neither.
(It was neither - 2nd attempt)