Educations got 99 problems and Hekia Parata is 98 of them 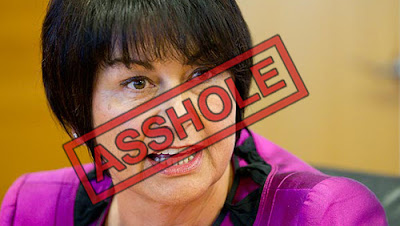 Sweet Zombie Jesus - is there anything Hekia Parata can touch in education that doesn't explode into a massive fire ball that incinerates any credibility she once had?

The larger class room size meltdown, the fiasco over Christchurch school closures and a Novopay system that never pays - these would normally be enough to call an end to a Ministers reign of terror, but seeing as Chris Finlayson is too busy trying to prop up the rest of the Government, Hekia doesn't seem to be going anywhere fast.

The problem for Key however is can he honestly keep her on in the wake of the judicial review over the closure of Salisbury School...

Salisbury School closure declared unlawful
The Government's move to close a residential girls' school in Nelson was unlawful, a judge has ruled.

Education Minister Hekia Parata proposed shutting Salisbury School and moving the students to a boys' school in Christchurch next year.

But the school sought a judicial review.

It argued sending the girls to a co-ed school will put them at risk and said there were questions around whether legislative tests had been met.

Justice Dobson said the decision disregarded "the prospect of greater risk of sexual or physical abuse" to the girls if they were sent to a co-ed special needs school.

...normally education policy is designed to have a positive effect on the lives of children. To specifically design a situation where special needs female students are sent to another special needs male school to face sexual and physical abuse 7 times greater in risk however seems to be more akin to building a children's playground out of depleted heavy uranium.

How Hekia disregarded the risk to sexual and physical abuse to some of the most vulnerable students we have and still have her job is a mystery.

She is the worst Minister of Education NZ has ever had. There. I said it.

Education's got 99 problems, and Hekia Parata is 98 of them.

Asshole is surely a hole on an ass which begs the question ...which hole in particular does parata most resemble ? I can imagine it's not the breathing holes nor the seeing or hearing holes nor the peeing hole and it can't be the breeding hole either because if you're an ass you're fucked because you can't . Breed that is .

So , it may be the shitting hole which would make sense given how full of it she is .

More darkly , asshole may be an american-ism . And if so , I don't like that one little bit .

Not an a.s.s-hole . Leave that one to the ignoble horse-donkey beast .

The cat I inherited woke me up at 4.00 am wailing at my bedroom door because she was low on the biscuits she eats to allay her fears that I might pick her up and throw her into my next doors neighbours back yard . I hate to disappoint her so I didn't .

I then started to writhe as one does about the events of the previous day and of what horrors might greet me as dawn rises .

Hekia Parata is not an ass . I meant mule . She's a mulehole . I got it wrong about the ass/arse of a woman .

1840 huh . The year of the signing of the Treaty of Waitangi