The problem for climate deniers like Cameron Slater & David Farrar 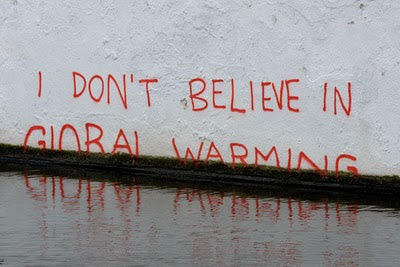 The problem for climate deniers like Cameron Slater and David Farrar and Keeping Stock and every other right wing crypto-facist clown who try to suggest that human pollution isn't warming the planet is that every time a severe weather event occurs, people will look at that and see it as proof that global warming is happening.

When Bloomberg are attributing super storm Sandy to Global warming, you know it's a bad day for climate deniers...

It's Global Warming, Stupid
Yes, yes, it’s unsophisticated to blame any given storm on climate change. Men and women in white lab coats tell us—and they’re right—that many factors contribute to each severe weather episode. Climate deniers exploit scientific complexity to avoid any discussion at all.

Clarity, however, is not beyond reach. Hurricane Sandy demands it: At least 40 U.S. deaths. Economic losses expected to climb as high as $50 billion. Eight million homes without power. Hundreds of thousands of people evacuated. More than 15,000 flights grounded. Factories, stores, and hospitals shut. Lower Manhattan dark, silent, and underwater.

...Climate deniers like Slater, Farrar and Keeping stock rely on the same tactics the Tobacco industry used. Muddy the waters on the science (there is no direct link between smoking and cancer) and keep repeating that position so people don't think the science is as settled as it actually is.

This tactic has been adopted by big oil. A report put out by Greenpeace shows how one of the largest secret corporations in America, Koch Industries, is spending tens of millions on inaccurate and misleading information regarding climate change.

In 2007, Koch Industries funded an astrophysicist to write an article about polar bears which, masquerading as a piece of peer-reviewed literature, attempted to refute the threat to the species due to climate change.

Koch Industries also funded a Danish think tank which produced a “dubious study about the Danish wind industry”, rejected by the Danish environment minister, which was then used to challenge President Obama’s support of wind power while funding groups which supported a “widely debunked study” which claimed that Spain’s support of renewable energy had lost the country jobs.

Oh and Koch Industries have also paid out huge amounts to other hard right climate denial think tanks like the Mercatus Center, Americans For Prosperity, The Heritage Foundation and the Cato Institute.

Let's add this to what we already know about big oil sponsored climate denial...

Frank Luntz Memorandum to the Bush White House, 2002, on how to shut down the global warming debate?

Right, so in the same way the Tobacco companies attacked consensus of a link between smoking and cancer, big oil and big polluters are using similar smear tactics to question the science behind the evidence that man made pollution is causing the climate to rapidly change.

Climate Change Skeptics
The world’s largest-ever gathering of global warming skeptics will assemble Sunday in New York City to confront the issue, “Global warming: Was it ever really a crisis?” About 800 scientists, economists, legislators, policy activists, and media representatives are expected to register at the second International Conference on Climate Change, opening Sunday, March 8 and concluding Tuesday, March 10 at the New York Marriott Marquis Hotel.

Hmmm, and I wonder who is organizing this climate change sKeptics picnic in wunderland? The Heartland Institute? Ummmm, aren’t they the very same Heartland Institute who until 2006 were receiving money from Exxon Mobile and who also is behind the Tobacco Industries ludicrous position that Tobacco isn’t scientifically proven to cause cancer and as such there shouldn’t be taxes on cigarettes?

Shouldn’t we at least be honest that much of the climate sKeptic agenda is actually funded by big oil?

Between 1998 and 2005: ExxonMobil Grants $16 Million to Global Warming Skeptic Organizations
ExxonMobil disperses roughly $16 million to organizations that are challenging the scientific consensus view that greenhouse gases are causing global warming. For many of the organizations, ExxonMobil is their single largest corporate donor, often providing more than 10 percent of their annual budgets. A study by the Union of Concerned Scientists will find that “[v]irtually all of them publish and publicize the work of a nearly identical group of spokespeople, including scientists who misrepresent peer-reviewed climate findings and confuse the public’s understanding of global warming. Most of these organizations also include these same individuals as board members or scientific advisers.” After the Bush administration withdraws from the Kyoto Protocol, the oil company steps up its support for these organizations. Some of the ExxonMobil-funded groups tell the New York Times that the increase is a response to the rising level of public interest in the issue. “Firefighters’ budgets go up when fires go up,” explains Fred L. Smith, head of the Competitive Enterprise Institute. Explaining ExxonMobil’s support for these organizations, company spokesman Tom Cirigliano says: “We want to support organizations that are trying to broaden the debate on an issue that is so important to all of us. There is this whole issue that no one should question the science of global climate change. That is ludicrous. That’s the kind of dark-ages thinking that gets you in a lot of trouble.”

So all the climate deniers in NZ are parroting is big oil spin, but why do climate deniers like Slater, Farrar and Keeping Stock in NZ do this? They don't have the financial investment that big oil and polluters have to smoother the debate. The reason climate deniers like Slater and Farrar keep the spin lies going is because for them, it's a cultural war. Slater and Farrar can not ever agree that human pollution is causing the planet to heat because it forces them to reflect upon the free market they slavishly worship.

Both would prefer to marry Metiria Turei than admit the Greens have been right all along.

NZers need to see the fraud that climate skepticism is and need to understand those who are climate deniers are so because they have a financial interest in continuing to pollute, or they have a cultural incentive to deny the Greens are right.

Global warming is happening and it is being caused by human pollution. The sooner we start accepting that and adapting out economy the better.

Sadly National have done so much damage to our clean green brand by demeaning our new tourism line from 100% pure to 100% middle earth.

As Hot Topic points out, National's decision to pull out of Kyoto is nothing more than National looking after their big polluter mates.

Oh Bomber please. The ONLY reason climate change skeptics are funded by Big Oil, is because they are the ONLY entities that will fund them (or listen to them) - for obvious reasons. It does not, repeat NOT, make these scientists conclusions WRONG or scientifically incorrect - only the science itself can determine that! The Government and the banksters who hold the purse strings are so in fucking love with the idea of trading carbon (which is just another fucking tax at the end of the day and will NOT lead to any decrease in emissions whatsoever), to attempt to stave off the their utterly bankrupt (literally) fiscal policies.
Believe me, there is NO consensus on climate change among scientists that are not on the take (EITHER from the Government (who you now apparently fully trust to make only correct funding decisions) OR Big Oil (who apparently can never do anything good whatsoever)).

Nitrium, presumably you can see some point in your opening comment.

Believe me, there is NO consensus on climate change among scientists that are not on the take...

No one is going to believe a pseudonym on the internet, why should they?

Distillation of the current state of scientific knowledge and research on climate change and the associated considerations and ramifications for policy makers can be found in IPCC reports.

The IPCC reports put all sideshow arguments raised by science deniers over scientific consensus to bed. No need to buy into argument over denier memes.

The IPCC reports put all sideshow arguments raised by science deniers over scientific consensus to bed. No need to buy into argument over denier memes.

I've read the whole thing a few years ago, and all I see is horribly flawed science, more assumptions than I can possibly list, and climate models that are designed to produce a predetermined outcome. That thousands of Government funded scientists in a giant circle jerk all agree with each other doesn't make it true. Only the science itself can make it true, and there is preciously little irrefutable science to be found in the IPCC report.

I see there were some complaints over at Kiwiblog about naming Farrar as a denier, but he essentially slimes his way around the science and throws his reliable trolls whatever denialist tidbits he comes across. Naturally, a feeding frenzy ensues.

What a good denier you are, sliming the world's best scientists and, I presume, linking governments as diverse as the US and China, to Russia and Iran, cooperating to the extent of manufacturing a false consensus on the science.