The myth of over-regulation and the delusion of self-regulation 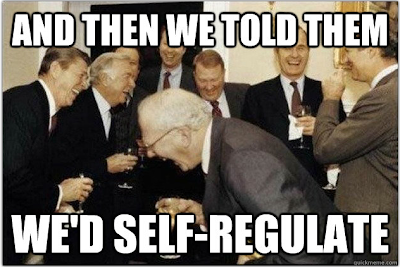 I was lucky enough to watch Nicky Hager's speech last week at this years Bruce Jesson lecture. We are blessed to have investigative journalists as courageous as Hager. He shines a light on the unpleasant truths of what our Government does without our consent while having to survive the rabid attacks of rightwing talkback and blogs.

Two things stood out for me in Hager's speech. The first was how a right wing, social conservative who is mates with the tobacco, alcohol and gambling industries like Peter Dunne can get called a 'centrist' by the mainstream media, and how the right always bleat how over-regulated NZ is.

Hager pointed out that NZ is ranked number 4th in the hard right Heritage Foundation's 'freedom index' of countries that they rate as having the most unregulated economy free from the oppression of the State. Just like the mythology perpetrated by the media that Dunne is 'centrist', we are deceived into believing the country is drowning in red tape that is strangling the entrepreneurial class.

So how did that whole 'getting rid of those awful regulations that hold back productivity' crap work out at Pike River mine then?

The families of the 29 dead miners know how false that myth of deregulation really is, and they have tasted the bitter truth of what industry self-regulation means. Now the report into what happened to those 29 miners is finally out, the neoliberal model that has manufactured this deregulation and generated these small Government memes has rapidly eroded the rights ideological justifications in the same way the 2007 crash has destroyed their self-regulating market fantasy.

NZ has a higher death rate at work per 100 000 people than Australia, Finland, Sweden, Norway, UK, Switzerland and Denmark. As the ever brilliant Gordon Campbell points out, NZ's official death rate at work could be far lower than our real death at work rate...

The annual DoL figures do not include deaths in the maritime or aviation sectors, nor fatalities due to work-related road crashes. The DoL figures also do not include the toll from occupational disease, which is estimated to lead to 700-1,000 fatalities and 17,000- 20,000 new and serious cases a year with asthma, skin diseases and asbestos-related cancer being the major contributors.

The role of work-related asbestos exposure in lung cancer deaths – which are commonly attributed to smoking – may well be significantly under- reported. According to the DoL health and safety advisor Dr. Geraint Emrys, (Safeguard magazine, May/June 2011) in comments about the 2010 National Asbestos Medical Panel report : “The taking of lung cancer history is still dominated by the smoking factor, and occupational factors are down-played.” In Emrys’ estimation, the steep rise in recorded asbestos-related cancers may not peak for another 20 to 30 years. (In the wake of the Christchurch earthquake, both the initial destruction to buildings and their subsequent demolition has posed a fresh risk of asbestos exposure from wind-borne particles.)

...so our death at work rates are as well hidden as measuring child poverty and domestic violence stats?

If you can't report on the problem fully, you don't have to be accountable for it do you?

The right scream deregulation and demand cutting through our 'red tape', perhaps the damning report into the self-regulation culture in mining will highlight how deluded that belief really is.

We need stronger Unions to force health and safety issues to the top of the agenda rather than allow it to be the first budget cut when contractors pitch for jobs.

NZers need to start questioning these right wing memes of NZ as an over- regulated pariah and challenge the media when they are unquestioningly regurgitated because these neoliberal myths kill.

When it comes to regulation, I prefer red tape to blue string.


"NZers need to start questioning these right wing memes of NZ as an over- regulated pariah and challenge the media when they are unquestioningly regurgitated because these neoliberal myths kill. "