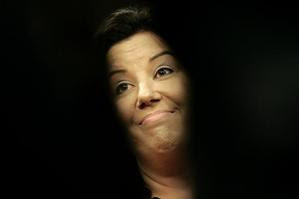 In Parliament today, Paula Bennett described unemployment numbers to be 'Bouncy. Like me.'

I would suggest however that Bennett is as far away from the fun sense of bouncy as humanly possible. Instead of answering the hard questions about her draconian beneficiary bashing crucifixion of the poor, Paula has constantly used infantile answers to try and push aside any real scrutiny of her policies.

CPAG have done some OIA fishing and have discovered the terrible truth behind the bennie bashing policy. According to Work and Income NZ, as of the end of August 2012, 377 people with dependent children have had benefits reduced by 50%. 234 of them were sole-parents receiving the DPB. In 84 cases, the child in the family was younger than five.

The very thing many on the left warned would happen by implementing this new purge has happened. Despite Paula's claims that beneficiaries with children wouldn't face these steep sanctions, 377 have.

The stress this poverty will cause children whose only crime is to be born to a beneficiary is difficult to measure but the fun Bouncy Bennett routine becomes quickly eclipsed by Cruel Paula reality doesn't it?

NZ is fast becoming the place compassion goes to die.

The great irony of course with ANY politician who bashes bennies is that they both eat from the SAME fucking trough! Seems to me it's high time for some MP bashing that can be argued on EXACTLY the same grounds!

Unemployment bouncy? Like her bloated buttocks on the run? Not surprising there’s nothing but a trail of shit to be seen.

Re above ; Haha ! Ahhhh . I love the company of like minded souls . Well done .

Lest see if bennett is in fact actually bouncy and push the cunt off a building . We don't want to kill her because that would impact negatively on us and by building I mean like a chicken coup or a garden shed . Just a wee push . She'd hit the ground with a whump and a gust of wind . All the ornaments would jump on mantlepieces along the street . Birds would fly off in panic . Leaves , shaken loose would gently fall .
But on a more serious note . When I look at bennett , into those black beady little eyes I get a chill running the length of what was once a spine .
I see the blood lust of a preditor . Have you seen your liddle tiddums of a cat when it has some poor creature in it's jaws ? It's eyes go black and sparkle . You can see the pleasure it gets from the power it has and the pain it's about to inflict .
While bennett was on the bennett-fit she'd have to rub her beefy shoulders with other bennies and in that process she's developed an intense personal hatred from them . And frankly I can't blame her . I've owned a business in a very poor part of town where the average household income was $18 k a year . At that income level people get fucking ugly in every sense of the word , become angry thus dangerous when pissed up , thieving , untrustworthy and unreliable . But that's not their fault . That's what happens to people who are squeezed until all the good stuff is down the drain . That's what's so hard for the voting Right to comprehend . And that's why it's so easy for the likes of bennett to get into positions of great power to take out her emotionally stunted spite on the Great Unwashed . Or Hoi Polloi if you prefer . I would argue that she is precisely the paradox of a politician who should be let anywhere near a vulnerable person . She just sees it as an opportunity to get her jollies and that's creepy . If I was a bennie I'd be getting very , very worried right now . Oh but wait . I forgot . Being worried is all bennies can afford to do . Well then . They have nothing to worry about . See ! That's bennett logic . They really have to go don't they .

377 sanctions? This always happens - the penalties start getting imposed even before the legislation's been passed! Unlawful but as usual nobody cares because it's only beneficiaries.