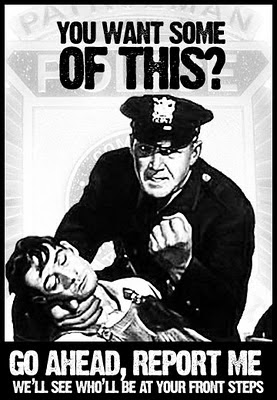 The NZ Police reassure the country that they are the only gang trying to infiltrate the force.

I'm waiting for Greg O'Conner to explain to a breathless media why the possibility of gangs infiltrating the Police is this weeks reason as to why the cops need to be armed at all times.

Whenever Greg opens his mouth these days it's to demand more bloody guns. How about your members start using tasers and pepper spray and police dogs without abuse before we start passing the semi-automatic handguns around eh Greg?

We have an authority worship culture in NZ that isn't healthy when it comes to the Police. Courts seldom rule against the Police when they are revealed to be out of line and the vast erosion of our civil liberties that we all allowed to occur with the search and surveillance Bill is ironic for a country that reared up on it's hind legs and screamed 'nanny state' over the repeal of section 59.

Funny how preventing abusive parents to use 'discipline' as a loop hole to escape being charged was a state intrusion too far, allowing the Police to spy on you for days without a warrant and removing the right to silence doesn't crete a murmur amongst NZ's population of two legged sheep.

My hope is that the next generation will be far more critical of the Police than the current older generation and this week there have been suggestions that the rose colored glasses are being knocked off.

The fiasco of the Kim Dotcom raid and our Police departments pathetic slavish toadying to the FBI in a glorified copyright case highlights Police incompetence and does them no favors.

The despicable case of two female Upper Hutt teenagers (14 and 16) who were strip searched and kept in a cell for 36 hours, denied any contact with their family or lawyers and the 16 year old had to express breast milk into a sink after the Police took her daughter off her!

The report into the sado-masochistic gang rape culture of the Police demanded a list of recommendations that Margaret Bazely at the time claimed could not be left up to the Police to implement. What has happened since that report? The Police haven't implemented those recommendations. Surprise, surprise. Apparently the sado-masochistic gang rape culture of the boys club of NZ Police doesn't need any more reforming, even though the current Deputy Auditor found an ongoing low level environment of sexual harassment and an internal culture that still doesn't support reporting on fellow Police Officers.

Public trust in the police has fallen, with overwhelming support for a beefed-up Independent Police Conduct Authority, a survey has found.

The police performance survey of 756 adults, surveyed in emails by Horizon Research during the weekend, found 80.7 per cent of respondents wanted complaints about police to be investigated independently.

I am currently working on an investigative piece questioning Police bullying tactics that led to a suicide and I will post that investigation up this month. Everything I see in that case speaks of a Police force utterly out of control playing games they don't think they'll ever get caught on.

We need a fully independent Police Complaints Authority and we need to really question the uncritical authority worship that infects so many of our older citizens.

Good post Bomber . Is the AIG logo going to be seen on police uniforms soon ? The NZ public should have a whip round and buy the cops before someone else does . Or has that been done already . I saw on TV One about how the cops are pleading for motorists to be careful when driving this Labour Day . I also saw a sausage sizzle dripping in State Insurance logos during the same lame message .

I nominate Greg O'Connor for the Josef Goebbels Propaganda Award.
If it doesn't exist then you should set it up.

I've been wondering now for years WHEN rank and file police members will wake up and realise that Greg O'Connor is actually their own worst enemy. I've also always thought there is one huge conflict of interest with his position which appears to give him access to police records that enable him to make some of the most crass commentary when bad things happen (always leaping to the defense of some idiot that brings disrepute on the majority of the force). He usually opens his trap before he's had time to think too. What's worse is that he promotes the stereotypical image of the "fik copper" - hardly something the Police would be hoping for when they're supposedly trying to promote cultural change.

Oh and @ Countryboy... Nothing will change until people wake up to the notion that the worst thing that has ever happened in this country is the 'corporatisation' of the Public Service - across the board. It clearly hasn't worked - but then neither has the neo-liberal agenda generally. We were supposed to get more accountability, de-politicisation, and of course fishinsy n fektivness. None of it has happened. All we've got instead is a load of government departments with CEO's or CEO equivalents (including those with titles such as "Police Commissioner") who run things like they're their own little feifdoms.
Just rattle off a list of gubbamint departments to yourself....then tell me where there haven't been total and absolute fuckups - all in the name of fishinsy n fektivniss.
Purchase agreements ffs!
It'd be bloody funny if it wasn't so pathetic!