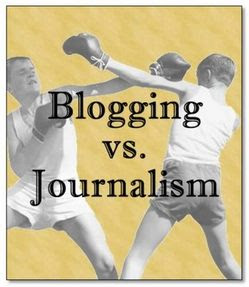 Round one of Journalists vs Bloggers between John Armstrong and Gordon Campbell/Bryce Edwards went to the Bloggers by knock out after the shit storm of criticism lashed out at Armstrong's bizarre rant at bloggers in the Herald a couple of weeks ago. Round 2 between Keith Ng and John Hartevelt/Herald on Sunday over the mainstream media's use of deeply flawed national standards is even more of an arse kicking.

Interesting to note that after attacking Gordon and Edwards over their left wing bias and then being counter criticized because of his own long history of National Party cheerleading, Armstrong has written more critical columns of the Government over the last couple of weeks than he has in the entire first term of John Key.

You would think after that roasting and all the wailing by Fran O'Sullivan and Guyon Espiner at how awful bloggers were that the journalist collective would take some time-out time before rumbling with the blogosphere again, but no one seems to have sent John Hartevelt or the Herald on Sunday that memo.

In Journalists vs Bloggers Round 2, uber data king pin blogger, Keith Ng, dissects with terrible efficiency all the sophistry and bullshit rationalization espoused by Hartevelt over why using nonsense data has any journalistic integrity whatsoever.

In this fight it is the blogger who is gloriously taking the journalist to task over the veracity of their factual claims.

Watching Keith Ng spank Hartevelt & HoS on Media 3 in the weekend is one of this years media highlights.

Newspapers don't care about your child's educational achievement. They care about selling newspapers. Metro's largest selling issue of the year is the top schools issue, stuff.co.nz and the Herald want to chase that market and no half baked justifications by Hartevelt can escape that commercial reality.

Hartevelt is so hard up for a defense that he has a go at John Minto for mentioning that there is a corresponding link between schools in poverty and low educational achievement. It is the argument of a man so desperate for a justification he has to dredge up some small point Minto makes at the bottom of an email to justify publishing national standards.

The mainstream media have misled the public by using these flawed national standards because there is no way any of them can be compared with any real accuracy. Hartevelt is comparing apples to screwdrivers and then getting prissy because others challenge him on the comparison.

This is a shame, because Hartevelt is a better journalist than this.

Stuff.co.nz and the Herald have both relaunched on-line as they see their future less in paper and ink and more in screens and websites. To date they have moved into the blogosphere neighborhood with all the subtlety of Israeli settlers moving into a Palestinian suburb.

If Journalists want to move on-line, they better find smarter ways of working with the blogging locals. It's the journalists credibility that is getting burnt by these engagements, not the bloggers.

One learns to 'switch off' from whinging kids fairly quickly, and carry on doing adult stuff...