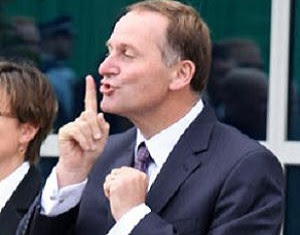 There is a constant answer this Government has used since coming into power whenever they face a problem they have no intention of solving - make it invisible.

We've seen it yesterday twice with revelations that National will dump the 5 year environmental report to let their polluting farmer mates away with damaging more of our environment without consequence and then again with the news that National killed off Ecan democracy because it would stop National's farmer mates from stealing all the water for themselves.

This cloak of invisibility goes beyond those two examples. Paula Bennett refuses to measure child poverty so that her Government can't be held to account for the poverty their policies are creating. Tourism NZ changed from 100% pure to 100% Middle Earth to avoid the hypocrisy of our green wash caused by farming. The Police have quietly submerged domestic violence stats into general stats and beneficiaries aren't being moved off benefits onto jobs - they're just being cut off using any excuse from not taking contraception to drug testing so that they are no longer officially recorded.

This Government is creating a class of unpeople. NZers who are hidden away from official stats so that their plight is no longer the responsibility of the State.

Based on the polls, NZers seem to love this, they want a Government that hides issues so they themselves don't have to confront them. Who wants to have all their right wing redneck reactionary talkhate radio empty rhetoric challenged when as a nation we can just ignore reality?

Child poverty is the parents fault, poor people are to blame for their lack of money and anything that reveals the truth about National's farmer mates damaging our environment is quickly smothered.

See no child poverty, hear no environmental pollution, speak no privatization is not a social policy..

well said! they are also setting up businesses that will continue to fleece the public purse after they get the boot.

I hope you sent a submission against the bill? here is the link you can do one online there is still time http://www.parliament.nz/en-NZ/PB/SC/MakeSub/2/d/6/50SCSS_SCF_00DBHOH_BILL11634_1-Social-Security-Benefit-Categories.htm
Cheers
Chris

rIGHT ON BB! eCan dictatorship and Environmental Report cancelled. Dictatorship is here and now! Its is more obvious by the day. The truth is nearly always painful ( or ignored )