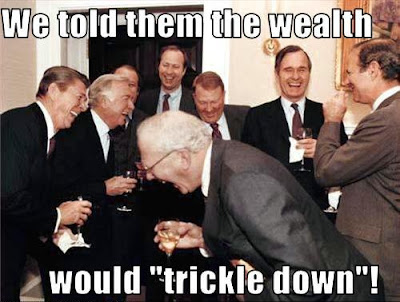 The EPMU Job crisis meeting transformed into a press conference to launch Brand Opposition. It was beautiful to watch.

I've never seen a room seething with such socialism. If this meeting had been held in the 1930's we would have all been arrested.

The EPMU's call to arms at the death rattle of the manufacturing industry will be viewed as the first part of a new narrative in response to the GFC.

To date we've had a Government too stunned by the 2007 meltdown to trot out anything other than lower tax's and assets sales with bennie bashing as the cherry on top. Much of their free market certainty evaporated after the collapse and no one is quite sure what the hell works.

The current grinding down of our job market isn't working. It's causing terrible levels of poverty and suffering, and TINA won't do much to rally the suburbs come 2014.

Peter Conway described it as a crisis in manufacturing. Nick Inskip painted a grim picture from the heavy engineering sector. Steel production fell in 2008 38%. Ouch. Hugh Whittaker provided an academic view of what is happening and put it into an historic context while Selwyn Pellett and John Walley tag teamed graphs and numbers of how damaging the higher dollar has been to the exporting sector.

We are choosing a flat screen tv economy to create a flat line economy was a great line.

The Financial Transaction tax was discussed at length and best question of the day had to go to economist Dr Ganesh Nana who wanted to know that if the panel was serious they should be advocating politicians taking the levers of power off the faceless technocrats and make political decisions with the economy.

The desire for an active Government intervening directly into the market is champing at the bit for political expression. The left are finding the ground firm under their feet as the rights economic prescription robs the country of it's sovereignty just when many aren't feeling work secure.

Russell Norman was very good pushing for a debate on the quantitive easing issue, David Parker was surprisingly good and seems to be far more on board with challenging the status quo economics and Winston was of course Winston.

The transformation from jobs crisis meeting into Brand Opposition launch was essential to back up the real sense of urgency manufacturers and unions are all feeling now. It wasn't what David Shearer, Russell Norman or Winston Peters had to say, it was the imagery of all three projecting Brand Opposition. For voters to see The Opposition with a capital T and O. That's why MANA wasn't invited, which is ironic as they are the only Party with the financial transaction tax as a policy they went to the electorate with.

A particularly critical person might add that while Winston, Russell and David were talking, Hone was out getting arrested at the frontline of the housing crisis. (A wag could counter that Hone's bail conditions may have prevented him from attending).

This was a bold, clear statement by three political parties that should they get elected, they will be far more hands on. The other purpose was to introduce Brand Opposition and let the voters glimpse the Cabinet in waiting. In both regards the day was a success.

The task for the unions and manufacturers is to ensure those words aren't lip service. With Key on the edge of meltdown over the latest Kim Dotcom revelations, the Opposition needs to be ready to move at any time over the next 2 years.

If audio surfaces of Key, that would be a terrible blow to his credibility.