Was our new Governor-General involved in authorizing illegal spying of Kim Dotcom? 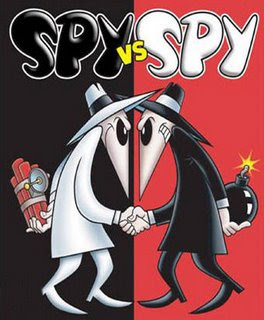 Just when you didn't think for one second the Kim Dotcom case could become any more grotesque and warped, breaking news this morning turns the whole case on its head again.

One would have thought wrong, because all that seems to pale into the background as the shocking revelation today that the GCSB, our Government's spy network, illegally spied on Kim Dotcom. Why the hell are the GCSB targeting domestic targets? They are supposed to be spying on external threats.

This has become a case of big brother spying on bigger brother.

The immediate question now we know the GCSB illegally spied on Kim Dotcom is, was our new Governor-General involved in authorizing illegal spying of Kim Dotcom?

Allowing our former head of the military to become our chief spook and then onto the highest ranked representative position of our political system always carried risks, having the GG involved in covert illegal spying tactics is one of those risks.

He was the Director of the New Zealand Government Communications Security Bureau from 7 February 2011 until 1 July 2011 - was he involved in this? Kim Dotcom months later was blowing up $500 000 worth of fireworks celebrating Immigrations decision to allow him to be a permanent resident so he was here and known to officials and certainly over laps Jerry Mateparae's time in the role.

We can not have a Governor-General who has green lighted illegal abuse of spying powers, even if the decision was made after Mateparae's time, whoever allowed this must be sacked.

This is a disgusting abuse of power by the state in a legal case that gets more bizarre and farcical by the month. At the very least we owe Kim Dotcom an apology and a cessation of this trial.

Sleepy Hobbits need to shhhh, because our big brother friends at the GCSB are listening now. How very ugly.

It is pretty evident that NZ 'security' services have long been prepared to do whatever it takes to regain full membership of "the club".
This has involved prostituting our nation in diverse ways with any and every member of the 'western alliance'.
Back when nuclear devices, nuclear power and nuclear free NZ was a hot button topic for most kiwis, our 'intelligence' services acted against the interests of NZ at every possible juncture to sabotage government policy and allow harm to befall kiwis.
The rainbow warrior bombing should never have happened had NZ's security services been doing their job properly. But they were far too interested in harrassing Greenpeace members themselves to be bothered to protect those Kiwis.
After the bombing; NZSIS obstructed the police investigation at every turn and it was thanks to them and the back channels they have with Canberra, that most of the french terrorists were allowed to sail away on the Ouvea.
SIS was also instrumental in convincing that imbecile Lange into bowing to French pressure to free the Mafart and Prieur terrorists.

Yet this is hardly surprising, so few of NZ's security 'operatives' are actual NZers.
Find that tough to believe?
Then do as I have, & go to a demo. Environment demos are best because after the demise of the USSR, 'greenies' became the number 1 target of security services.
They have never been about protecting people, protecting the assets & income stream of corporate capitalists is their #1 priority, so security services spend much more time & resources harassing people who care about their country than they ever spend chasing 'unsanctioned' [i.e. unwhite] bombers.
Once there,check out the fellows who look like they should belong but don't, yet they are busy photographing everyone. Annoy them until they have to respond. Guess what you'll hear no mangled 'fush & chups' vowels outta these creeps.
It'll be the consonants copping a hammering from englander born and bred operatives.
When foreigners run yer security, whose security is gonna be their real comcern?
Most of these panty sniffers aren't even NZ citizens, they are poms who have been foisted on NZ's intelligence services by 'our betters' to make sure that there can never be any independant policy implemented.
The decision to help set up Dotcom would have been made at the highest level for the worst possible motive, to get Leon Panetta here and re-normalise relations with the same old western security services that have also been signal failures at protecting their citizens.
Not because they don't have enough intrusive laws which is the perrennial excuse for curtailing our freedoms while they couldn't catch a cold, but because they are far too busy resurrecting imperialism and the white supremacist, Tory capitalist ideology which underpins that mouldering and corrupt strategy.

It seems pretty clear at this point that Kim Dotcom is being used as a proving ground for the inevitable Orwellian style surveillance state we are hurtling towards at alarming speed. We should be ashamed of ourselves. 1984 was supposed to be a warning, not an instruction manual.

Back in the 1980s' when they were building Waihopai we knew that the GCSB could and one day would do this sort of shit.
Well friends the chickens have come home to roost.
the sooner we get a government that serves New zealand first second and third can'rt come a second too soon.