Shearer on The Nation review 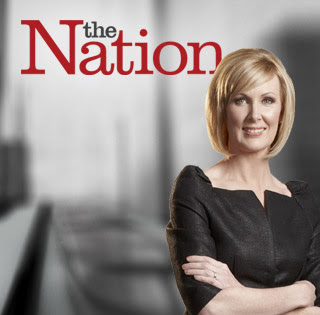 One thing you can say about Shearer's interview on The Nation in the weekend, is that he is getting much better and manages only a few cringe worthy moments per interview. His previous media appearances, let's be frank, have been woeful, but this weekend he didn't hemorrhage all over the screen.

On the left we must be thankful for small mercies these days.

I was left wondering 'if only John Hartevelt was this brave when asking questions of Joyce' during this weeks show, but the moment of joy has to go to Alex Tarrant who fed Shearer Cunliffe's words and Shearer walked into it by denying those words. It's worth watching the entire thing just to see the look on Tarrent's face while Shearer's answer goes deeper and deeper.

Hey I said Shearer's performance had gotten better, but from the point he was starting, staying clothed during the interview is a win.

David said he didn't bother reading the blog, and unintentionally showed up part of his problem. Because he has come to the leadership so fast, soooooooo fast, he has no institutional knowledge. He should be reading the bloggers, he should be reading Russell Brown, Keith Ng, Julie Fairey, Gordon Campbell, Chris Trotter, The Jackel, Frank Macskasy, Robert Winter, Ideologically impure, Queen of Thorns, Nicole Skews, Morgan Godfrey, Gareth Renowden and Richard Boock.

He should be reading Idiot/Savant, one of the best left wing bloggers on the block.

How about The Standard? Again, this is the largest left wing blog in the country. Shearer's NOT reading them? The life pulse of the left activist movement and the leader of the Labour Party isn't reading them?

The issue of the polls came up. The problem is that Labour is going up while Shearer's personal popularity slips, the last thing a leader wants is the perception that the Party is going up despite the leader.

Shearer has gained the confidence now to answer the questions by stating the message, this helps build on the argument Labour are making to those voters now listening but there's a difference between agreeing with an idea and believing it.

Interesting piece about the future of ACT. The Nation do more 'how is the health of the right going' than any other news agency in the OECD. The reason why ACT are dying, but this wasn't really touched upon, is of course because their entire ideological assumptions and justifications for the free market have blown out spectacularly with the financial meltdown.

Why would anyone join the flat earth society after the first round the world trip?