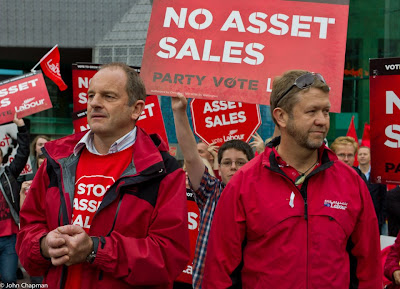 The silence at the Standard over right wing strategist John Pagani leaving last week is deafening isn't it? Don't get me wrong, having a Labour party sleaze hack like Scott Yorke (who stooped to the level of Christian Family man and gun fetishist Cameron Slater by publishing my contact details on his blog) peddle his version of un-funny humour is hilarious, but surely Labour losing their right wing strategist is a seismic shift that demands more than reposting Imperator Fish yawns?

And what a seismic shift...

Labour's $19m vow to feed children Labour's new education policy includes up to $19 million a year to give a free daily meal to all children in low decile schools.

...who woulda thunk Labour would take the MANA Party feed the kids policy. MANA have put their 'Feed the Kids' Bill into the ballot last week, at a cost of $100 million, it proposes to feed every decile 1 and 2 school breakfast and lunch. That's 531 schools representing 113 095 pupils.

Supporting organisations like KidsCan, Fonterra and Sanitarium just don't go far enough if we want to lift the educational achievement of the poorest children. KidsCan runs in 223 low decile schools and mostly provide fruit and snacks rather than actual meals.

Feeding our poorest kids can't be a charity supported endeavor, it must be a fully state-funded programme. The Government says, "We already provide fruit in schools' - an apple a day won't keep poverty away Mr Key. When will National get honest with their child poverty policy and actually start referring to it as 'The Hunger Games'?

Labour's low cost of $19million to feed the kids looks like they may have taken their costings from early erroneous figures that didn't fully cost the programmes and provide monitoring as well as the food, but the sudden focus on this issue days after Pagani goes is a sign that Labour have listened to the criticism of stepping to the right and are now trying to re-orintate policy back to the left.

Now they just need a leader who can articulate it convincingly. Watching David Shearer getting tripped up to endorse National Standards on Breakfast TV this morning was eye rolling.

Kidscan do do lunches. I support 2 kids daily lunches thru Kidscan. I make a monthly donation of $15 each. So for a lousy $360 dollars a year 2 kids get daily lunches. I have to agree with Kidscan that any govt. policy in this area of acute social need should be in conjunction with Kidscan and other existing charities. Why? because they have the networks they have done the hard yards setting up this service. Any overlaying of a govt. structure without working with these existing charities will lead to wasted resources and misspent taxpayer dollars.Previous governments have ignored the need for a school meals program for far too long and they need to work with existing services to get it right. The govt. has NO experience in this area and they will fuck it up for sure.

I don't think that it is a deliberate stance by the authors not to comment. I suspect that it is just too damn soon. After all John is more of symptom and contributor of an irritating issue than a sole causation.

I'm in a wait and see mode to see if an actual shift in direction is happening. I might come to a conclusion in a month or so. Or I may not. Based on what I know about the other authors and their comments (and posts)

Announcing a single feel good campaign that doesn't hit underlying problems. While welcome, arrests my attention with about as much yawn factor as Mana's policy did. And John Pagani would have been happy with this as a campaign promise.

But I'm probably less enthusiastic than you about short-term stuff :)

Not sure the silence is quite deafening - there are one or two comments (unless of course they've been removed).
I only recently discovered "The Standard".
I firmly believe though that there's never any point pushing shit uphill, or slagging off those that are allies or will shortly be allies.
No....the "Standard" hasn't quite been silent.
Paganini has gone - so the disingenuous, Chardonnay socialist, ego driven, bennie-bashing, wannabe, Jim Mora-loving, "ooooo oooo how concerned are we?", comfortably-off, bullshit-artist, "deeply-concerned", can't-do-without-my-XXX-tho', neo-fascist has gone - and we can see where (Gotta earn a crust though aye?).

I just think how fcuking stupid was Labour in the first place.
Here endeth the First Lesson.

"Feed the Kids" policy! Who do you suggest we feed them to?

Can you remind me exactly what the Government REALLY does? I thought they just listened to Corporate interests and then implemented Corporate policies. e.g. Sky owning the TV media content, Sky and pokies issue, Warner Bros trumps workers, lack of mining inspectors - Pike River, fishing slavery, dairy crap in the rivers, Canterbury water 'appropriated' by Dictating Farmer /dairy interests, 'trust us', the building industry, to build leaky buildings and ones that won't fall down in an EQ, ETS corporate polluters exempt from paying, and on, pretty much everything .....
I am in danger of becoming a robot, switch me off or I will have to self terminate... Goodbye