They shoot horses don't they

The NZ Super Fund should have bought the National Bank when Lloyds wanted to sell. It was probably too early in the piece for the Super Fund to make that sort of bid so the opportunity was lost to acquire a cornerstone, bread and butter, bricks and mortar, ticket clipping, chunk of the country's financial infrastructure. Now we hear the ANZ are going to wipe it out entirely.  The frollicking black horse is destined for the glue factory. 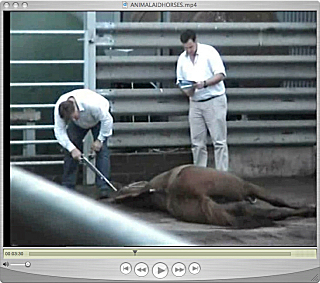 Same guys who had to put down Spot when Telecom got sick of him.

-----
Stuff:
Industry sources say the decision to rebrand all National Bank branches as ANZ will be made public at staff meetings this afternoon. ANZ National claims nearly half the population is a customer.
It appears unlikely that there will be large job losses immediately among the combined workforce of about 9000.
Instead, insiders expect a gradual head-count reduction in the next couple of years, largely through attrition, as surplus branches are closed.
“It will be the start of a fairly significant reduction in staff numbers over a period,” an insider said.
ANZ has maintained that it will retain the country's biggest branch network, but some of its more than 310 branches would be merged where they were close together.
[...]
ANZ bought the National Bank from Lloyds TSB bank in 2003 for $6.9 billion in the biggest deal in New Zealand's corporate history at the time.
[...]
Abandoning the National Bank brand could result in Australian parent ANZ writing off up to $3.5 billion in goodwill and reducing its capital requirement, banking expert David Tripe says.
-----

Does this mean the wanky, patronising, upper-middle class private school voice-overs of Craig Parker, accompanied by the soaring classical strings of Europhilia, are over? Hmmm, so not all bad news after all.

Seeing as how the ANZ have already merged parts of the National Bank operation into the parent, and considering it must have had (or did not need) Commerce Commission approval, there shouldn't be any noticeable anti-competitive implications. Well, it couldn't be any more uncompetitive could it?

Tim, in actual fact the ANZ is in the process of merging all the back end systems into the national bank systems. This is being done because the nat systems were and are superior to the anz systems.
They will close branches where they are a few feet apart. Kaitaia is a good example of this. They are adjoining.
Both banks run things very lean already re staffing and most duplication (other than marketing) has been eliminated already.
Unless they are looking to shed a large chunk of customers they simply will not be able to cut staff numbers dramatically.
The timing of this change is due to the fact that the former owners of the national bank only licensed the black horse through until early next year.
And the former owners of this iconic kiwi brand (with it's British black horse) was Lloyds PLC.. So in fact our kiwi British bank has in fact just become a Kiwi Aussie bank.
Disclosure.
Until quite recently I worked for the ANZ National bank.