What the real aim of drug testing beneficiaries is 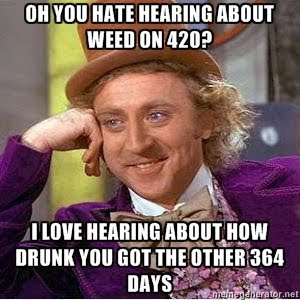 What's more dangerous? The Beast of Blenheim, Huffing or the Tongan Police? None of them, apparently stoned beneficiaries...

...I joked this week about what ridiculous bennie bash would Paula Bennett come up with to distract media attention from the asset sale fiasco, lo and behold Paula comes out with her drug testing of beneficiaries.

Isn't it funny that whenever Key needs a distraction Paula launches a new draconian welfare policy?

Let's be very clear about why drug testing beneficiaries is stupid and why it's really being implemented.

Drug testing beneficiaries is stupid for a number of reasons.

Marijuana stays in the system for weeks and months, the tests can't show impairment, they show you may have smoked a joint in the weekend. That doesn't mean you are impaired for the job, so this becomes a witch hunt for the most widely used illegal drug.

This isn't about being 'work ready', this is moralistic punishment for beneficiaries smoking marijuana.

The other reason drug testing beneficiaries is stupid is because of the staggering cost...

High cost for drug testing beneficiaries: Health ministry
The Council of Trade Unions says drug testing people on welfare is no more than beneficiary bashing after revelations Ministry of Health warned the Government its policy will cost twice as much as it saves.

President Helen Kelly said a memo obtained by the CTU shows the policy is a $14 million "waste of money". The Government could save up to $6m and was spending $1.9m on drug rehabilitation.

...this moralistic little knee jerk is going to cost us twice as much as it's going to save us???!!!

So why is drug testing beneficiaries being implemented? Beyond the immediate need to distract the media and the public, as Paula has done time and time and time again, this policy is being implemented because marijuana is the most popular illegal drug in the country and it stays in the system for weeks and months. National don't believe in creating jobs, they create 'environments' where jobs are created, likewise they won't find the unemployed jobs, they'll find ways to create an environment that disqualifies them from gaining a benefit in the first place.

Drug testing beneficiaries isn't aimed at making them work ready in a 9.1% real unemployment labour market, it's aimed at disqualifying them from recieving a benefit, thus removing them from the official 6.9% unemployment rate into the invisible world of poverty.

We are implementing redneck talkback bigotry as social policy when it will cost us twice as much as it will save, punish for punishments sake and simply throw poor people onto the trash heap without needing to be responsible for the consequences of that action.

There is unlikely to actually be a problem too...
“In the four months that Florida’s law was in place, the state drug tested 4,086 TANF [Temporary Assistance for Needy Families] applicants. A mere 108 individuals tested positive. To put it another way, only 2.6 percent of applicants tested positive for illegal drugs — a rate more than three times lower than the 8.13 percent of all Floridians, age 12 and up, estimated by the federal government to use illegal drugs.”

I'd like to see the Minister come out with an actual policy that creates jobs, stimulates business growth (since in office the funding for the highly successful Enterprise Allowance Scheme has been drastically reduced), or do anything that "targets" long term beneficiaries with something other than penalities and humiliating media coverage.

Realy given her shocking performance almost anything along this line would do.

Reading a thread on TradeMe there was a discussion about how almost retired folks had to attend multiple seminars before being able to receive a benefit. The clear implication is that if you fervently attend said seminars, have an up to date CV and job diary in hand work will surely follow....

How many thousands of people go through this only to have no such work magically appear?

The right wing media has been far to kind to Paula Bennett who's policies are no better than Labour's or the Green's, but have sufficient media barbs to make us think she has it handled. It is increasingly clear she does not.

So let me get this straight, if you test positive for cannabis the Government just stops your benefit completely? i.e. you get zero?
What do you think said beneficiary is going to do next? Starve? Scavenge? Beg? Busk? Try and get one of John's Ghost Jobs (for which they are disqualified anyway, due to the same positive drug test)? Oh, I know, how about just saying "stuff it" and simply stealing what they NEED to fucking SURVIVE, for which they will eventually get caught and go to prison and finally get some food, on, you guessed, a Government ticket. This Government is so fucking bereft of anything resembling a brain (let alone a conscience), it is literally becoming hazardous to our collective health.

It's an admission that the Nact's economic employment policy has failed! Another way to reduce the unemployment numbers and make one contractor to MSD rich. A.Roberts who owns In Work NZ Ltd in west Auckland. He's keen to become the main supplier of the drug testing kits to WINZ & the private sector. He's on Paula's Welfare Working Group.

@ Nitrium . Basically , yes . Yes to virtually everything you asked and have expressed fears for . And Bomber , you too are correct in what you say in my humble view . My advice , if I were in a position to offer advice , would be for every single pot smoking person to smoke much more pot . My plan is simple . I'm hoping a little of that Pot smoke might permeate Parliament Buildings , get past Winstons wheezing , cigarette damaged lungs and into virtually every other boozing politicians head . It might give them clarity and a new perspective on how monstrous they really are .

Sadly though , that will not happen .

We have created the Monster by shunning our responsibilities to maintain our democracy for the allure of the beach or a nice sleep in .

We've done this to ourselves and no matter how passionate we are here , or there , they're not going away of their own accord . They need to be got rid of .

We need some dynamic , charismatic person to whom 90% of NZ'er's can relate to who will galvanize us into rallies , marches , strikes , snap elections , commissions of inquiry , court hearings , sentencing and imprisonments .

Now , this might sound a little nuts but how about we all pitch in and employe that guy off Shortland Street . I saw him get fidgety with that arch fuck-head Mike Moore , the bowling-ball headed scum bag .

Martin Henderson ! He fucking loathes the Neo Liberal take-down of NZ . I don't think he's working right now and while I'm no Gay man , he's a good looking kid . Better looking than Mitt Romney that's or sure . He has acting talent and comes across as convincing enough .

Paula Bennett HAS to go !

Judith Collins HAS to go !

John Key HAS to go !

These people are enormously dangerous to our , or any other society . They're deliberately creating tension within our communities and it HAS to stop !

My other advise might be to those poor buggers on the dole who can't afford to piss-up but God only knows need a nice diversion from the warped madness that is life as we know it being broadcast at us by the creepiest and most addictive substance known . The TV . Become and addict ! Smoke more then go on the sickness benefit . How's that for a job ? That's what National are pushing you into after all . So , go with the flow man .

Seriously though . Lets get rid of these useless , greedy swine ! Now !

@ Kyle . Who the fuck cares about Florida ? I don't for one and as for statistics coming out of THE most propagandist country on Earth ... Yeah right . Florida's just a snake infested swamp in the United Hates of America

I may be vile and pernicious
But you can't look away
I make you think Im delicious
With the stuff that I say
I am the best you can get
Have you guessed me yet?
I am the slime oozin out
From your tv set

You will obey me while I lead you
And eat the garbage that I feed you
Until the day that we don't need you
Don't got for help...no one will heed you
Your mind is totally controlled
It has been stuffed into my mold
And you will do as you are told
Until the rights to you are sold

Well, I am the slime from your video
Oozin along on your livinroom floor

I am the slime from your video
Cant stop the slime, people, lookit me go

A bit of Uncle Frank for your Friday Folks! A perfect description of Key and his cronies.

Totally agreed with you thoughts @Zoe Black. A new policy should be announced that can effect businesses and humanity positively too. passing drug tests are just one of it.

Totally agreed with you thoughts @Zoe Black. A new policy should be announced that can effect businesses and humanity positively too. passing drug tests are just one of it.

Go here . This is brilliant !

Does it not irk one when one realizes one's being corraled by fools , liars and swindlers ?