Big tobacco are not 'artists' who 'create' - they peddle addictive cancer 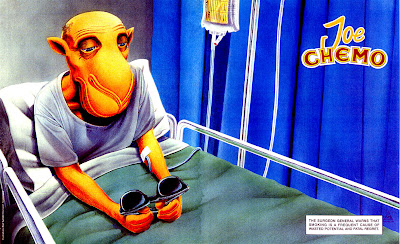 I can not believe the manner in which big tobacco are attempting to convince us that plain packaging is an abhorrence.

They admit that tobacco is harmful, but now attempt to convince us that it is their blessed creativity that they own that is under threat now, not the health of those addicted to their product.

That's right, they aren't legal drug dealers peddling an addictive cancer, they are artists trying to protect their art.

In a Facebook age where everyone is a digital designer, the idea of creative ownership is wide spread but to try and use that to defend the market tested colours and fonts and logos of big tobacco as a right that over rules public health concern is an insult to our collective intelligence.

Can you fucking believe these guys? We tolerate tobacco the way we tolerate sex abusers released back into the community after their jail sentence.

This is about Big Tobacco trying to turn around decades of lies over health into a debate about creativity and we shouldn't agree to disagree, we should hold it in the contempt it deserves.

Big tobacco are not 'artists' who 'create' - they peddle addictive cancer. Fuck em.

I'm just surprised that they're not running the "Stop Plain Packaging! Stope This Nanny State!" ads they're running in Australia.

The ads aren't aimed at us, Bomber, they're aimed at the newspaper publishers and broadcasting networks.

Add up the amount of money being spent - then look at the response from editors and columnists.

See how it works?