Water for free and power forever 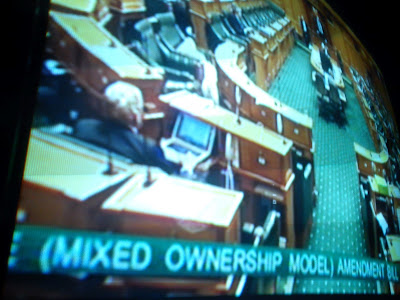 The understanding when any arm of the NZ government wants to use a resource for a public purpose is that in the first instance the owner of the resource will be negotiated with for that access, use or ownership right and failing an agreement it may be taken by the government agency under statute - and then shall be returned to the owner if it is no longer used for a public purpose. This is the core concept enshrined in the Public Works Act 1981 and its antecedents and other legislation dealing with expropriation by the State.

Q. So what happens when the original public purpose that justified the expropriation becomes a private purpose? A. It reverts to the former owner.

This straight-forward and long-standing principle is essentially what the Maori objection to National's asset sales programme is based on.

It would follow that to the extent that the resource is being privatised then to that extent it should be returned to the former owners.

If the government privatises 49% of a public work then it stands to reason that 49% of the things expropriated must be returned to the former owners. In the case of a production component that is a non-descrete and inseparable physical resource - such as water - this would probably mean a monetary form of compensation based on the value derived from that resource in the proportion of the expropriation (as it is unlikely the former owners would forego money in lieu of say having 49% of the water being unused or any other non-monetary/environmental scenario).

Without over-simplifying the case before the Waitangi Tribunal or what may be launched in the High Court, this is basically the objection in a nut shell.

The NZ government - as it is in almost every circumstance physical and cultural - is at cross-purposes with the Tangata Whenua because it represents the interests of the Pakeha settlers and their descendents as a perpetual duty. Their form of social and economic organisation and the personal wealth of their elite in particular is premised on 'free' access to Maori resources: land and labour.

So the NZ government does not want to concede any practical or substantive recognition of Maori (pre)existing rights at all; and have in the recent past legislated against court rulings that have restored official recognition to Tangata Whenua in regards their inherent rights to their resources (eg. Marine & Coastal Area/Foreshore & Seabed Act).

While this track record would suggest the National government will be tempted to bulldoze aside any adverse tribunal or court judgement, the potentially damaging consequences of having the Maori Party coalition partners walk away may weaken their hand and force a compromise that could recognise some aspect of water rights.

And as for John Key trying to maintain that no-one owns water - that stance is hypocritical bunkum - double talk. From the ideological mantra of 'there is no free lunch' and 'no-one owes us a living' comes "water is free"!?

What about the huge subsidies about to be sloshed out to the irresponsible greed-mongering of the Pakeha and foreign-owned diary farmers in Canterbury for their irrigation projects? The government went as far as sacking the democratically elected council in order to impose their water take for those private interests. To imply that water doesn't have a value, isn't valued and to say that it doesn't have a price is just not true, as is the idea that it is not capable of being owned. How can he say that with a bottle of NZ water right in front of him - did he get it for free? - is he paying just for the plastic bottle? The government itself treats water as a commodity to be controlled, appropriated, bought and sold - they are property rights.

The Tories would much prefer foreigners to clip the ticket on the nation's natural resources than to give any shred of recognition to the actual indigenous owners. The sale of chunks of the NZ government's energy assets and the consequent undermining of Maori interests in water are acts of colonisation not modernisation. This fight is just beginning.

Thanks for the clear explanation on the issue surrounding ownership of water.

I wish to point out that it is important to be clear that the Government's actions do not support the wellbeing of all Pakeha, and to say that they do is incorrect and encourages a certain misunderstanding that can lead to Maori feeling more put upon than is the case. Not denying that there is racism toward Maori here (sad and disgraceful as it is), simply that you are saying things that support a belief that pit Maori against Pakeha, when that is not what is occurring.

I believe my point is supported by the widening gap between rich and poor in this country; the Government's actions and aims are those that support a certain small sector of New Zealanders; one could suggest those of a "white male mentality" however it is probably more accurate and less divisive to say Government activities are supporting those in the big business & big money circles and every other section of our society is marginalized.

Take care not to do what our "leaders" do (on both sides of the political spectrum): alienate us from one another where in reality no alienation truly exists and thus the sad old tactic of divide and rule continues to succeed.

Speaking of water projects in Canterbury ...the Selwyn Council is BORROWING so that it can LOAN money to the privately owned CPW scheme. Fuckin' madness