Speech to TVNZ7 mourners at funeral for public broadcasting 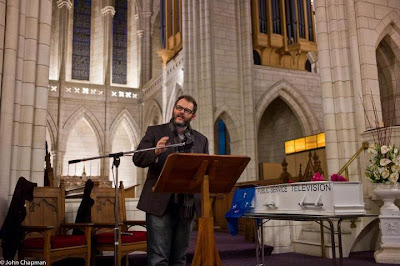 Kia Ora Ladies and gentlemen. Welcome to this sad day for TVNZ7 and the death of public broadcasting in NZ. It is understandable that many of the hosts couldn't make it here today, it isn't easy for a presenter to outlive their TV station, but I believe in resurrection. It might not be in 3 days, but if there is a change of Government in 2014, we will bring back TVNZ7.

I am your host for todays funeral service, Martyn Bomber Bradbury, I am a blogger and broadcaster on Triangle TV and I have hosted most of the save tvnz7 meetings around the country. Tonight we celebrate the life of TVNZ7 while mourning the loss of public broadcasting.

Beyond Maori TV, brothers and sisters there is effectively no Public Broadcaster on nationwide television in NZ any longer. TVNZ has increasingly seen their news audience as consumers rather than citizens, and when a broadcaster see their audience as consumers and not citizens then a 'downmarket' content formula is adopted by the broadcaster to select stories based on their ratings shock value over their fourth estate function of a critical media holding the powerful to account

This function within a Democracy is vital for the health of our democracy, however this concept has become increasingly sidelined with a myopic focus on entertainment uber alles.

This 'disneyization' to make news entertainment is what we the viewer sees at the front of the house, while a management style of 'McDonaldization' out the back of the house has stripped down the Journalistic mechanics for speedy pap production.

If it bleeds, it leads because shock stories about crime gain ratings.

Even though crime stories as a whole had slumped to 14% in March 2010 on the 6pm One News, it was represented 35% of the time in the headlines. The impact is that the shock value of crime is vastly over represented in the news headlines so the impression left with viewers is one of a mad max post apocalyptic nightmare requiring Dirty Harry to sort out.

Interesting to note that the misrepresentation of crime in the News coincided with the rise of the Sensible Sentencing Trust.

As if these challenges to Public Broadcasting and holding the powerful to account was difficult enough, Mediaworks gained $43 million in a deferment loan and SKY TV has been allowed to become a de facto monopoly.

The idea that Rupert Murdoch made $120million profit from sky last year while public broadcasting has been left to die just seems as wrong as putting Paul Henry onto the broadcasting standards authority doesn't it?

TVNZ wouldn't promote TVNZ7 because they feared it would eat into their ratings and the Government didn't want to fund TVNZ7 because they don't want a critical media asking hard questions, leaving a corporate media that prefers not to rock the boat.

The mainstream media seem so biased towards the Government sometimes, that you get the impression John Key could eat a kitten live on Close up and the NZ Herald would blame the kitten for being delicious.

Use your sky dish to get sbs on geekzone. http://www.geekzone.co.nz/forums.asp?forumid=83&topicid=38469 is one of them.

With a well setup sky dish pointing at the same satellite as Freeview and Sky (Optus D1) and a cheap satellite decoder you can set this up.

The signals from SBS are not intended for NZ. They could be turned off or encrypted without notice at any time, but have been there for a long time now.

Enjoy it while it lasts.

Get SBS on your sky dish: see geekzone. http://www.geekzone.co.nz/forums.asp?forumid=83&topicid=38469 is one of them.

With a well setup sky dish pointing at the same satellite as Freeview and Sky (Optus D1) and a cheap satellite decoder you can set this up.

The signals from SBS are not intended for NZ. They could be turned off or encrypted without notice at any time, but have been there for a long time now.

Enjoy it while it lasts.

One of a growing group of critical thinking linkers, giving notice to this government we will not be deterred by the Gnatz trying to dumb us down daily via the lamestream media..very much also mourning loss of TVNZ. Au contraire though personally am more motivated than ever..
Do please make sure you are at Brit0mart at 2pm on July 14th 2012 (Bastille Day).. for an Aotearoa is Still not for Sale march.. aka No John get a new mandate..
If all our assets are on the chopping block now and they say Sell ..
We say HELL no!
Game on!