The state asset privatisation debate has been raging in parliament this week as the "Mixed Ownership Model" Bill is driven through the House by the Tories. The wholesale looting by a minority consisting of the wealthy beneficiaries of National's tax cuts will be grotesque - a far cry from Tony Ryall's blithe insistance that "ordinary Kiwis" will buy the shares. And with a parliamentary majority resting on just the Nats, John Banks and Peter Dunne it all hangs on a single vote to pass it. Last night there were recriminations, threats and plenty else besides. Would there be anything less with the backbone of the energy sector at stake, with the government's biggest and most profitable corporations about to be shed of public interest constraints and opened up for private gain at public expense?
With this almighty shit-fight on how have the two big NZ news sites been covering this today? How have they told their mass audience about these events? 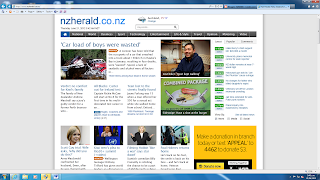 Nothing on the main site.

But lurking in the far right corner of the National News page: 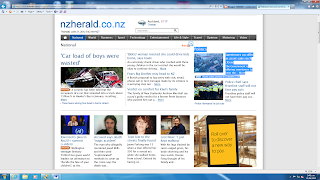 Like it isn't important at all, like it's not really news, just politics. Can't expect much sympathy from the old Tory bumrag, but this just looks like a cover-up. A decision to make this not news. 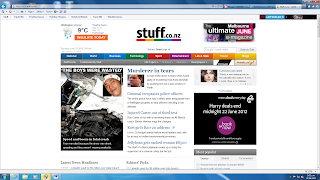 Nothing on the main site. Nothing.

On their national news page: 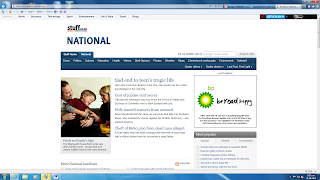 Nothing. Maybe it's relegated to the politics section like the Herald has? 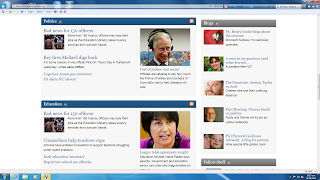 Nothing, zip. Not even a hint from Fairfax that this looting is underway; just the impression of more trivial tosh of no moment whatsoever from their supposed big hitters. You will be excused for not revelling in their profundity...

For some reason, it was official Pick On Trevor Day in Parliament yesterday, writes Jane Clifton.
[...]
First Reading: Vernon Small on Politics
Rusty and Winnie vie for job as Labour sidekicks

The big media corporations are in on this because the government has committed to sell shares to "ordinary kiwis" ie. the wealthy middle and upper classes and this means loads of advertising heading their way. That gravy will be slopping over into the coffers of the NZ Herald and Fairfax. They are not disinterested parties to this lurid transaction and this goes some way to explaining their coverage, such as their silence today.

Of all the solid criticism of the bill that I have heard from the opposition so far something I haven't heard yet is how much debt will these partly privately owned companies start racking up? Wouldn't it be in the interests of the new directors who represent the private shareholders to issue some debt to give them a better dividend? In a situation where some in the opposition want to buy the shares back wouldn't it make sense for them to pressure the other directors to take on more debt so they can extract the most in the window they have available? I would not be surprised if the first thing the new board does is borrow against those assets. And because the government is a majority shareholder that the debt is tacitly underwritten by the Crown - meaning the lower interest rate and security provides a huge scope to issue debt.  Now how bad will the Tories look when they refuse to take on more debt as an excuse to sell down the power companies if the power companies themselves start taking on debt?

The truth is the NZ government's sovereign debt position, though deteriorating, is still relatively stable and not in a crisis, and that the interest rates on bonds have never been lower and thus more affordable for the Crown.  The Nats don't have to sell the assets at all, they are choosing to sell them.

It occurs to me that media management may not have a clue how much 'oxygen' to give to this story. On the one hand, it's the news story of the year (aside from the ongoing ACC/National Party meltdown) - on the other hand, they don't want to shed too much light on an issue that is shredding John Key's public image.

The msm may not be giving this matter much coverage - but the blogosphere is having a field day!

I'm bloody sick of taking time out to explain ; You , Them , Us and It to wide eyed and ignorant ( No disrespect ) people . I know some very involved , politically aware , media types . I know professional and creative people and I'd say 99% have never heard of Tumeke . One or two of them have heard of Bomber Bradbury . One or two of them have heard of Honi Harawira but only because he said ' I'd be disappointed if my daughter came home with a pakeha . 'or words to that effect . Big fucking deal anyway . Not because the man has a good heart . And if I only had a dollar for every time I heard some dipshit say something racist about Maori to say nothing of virtually every other human with a different profile other than stupid white people , of which I am one I'd be able to buy that block of cheese I have on lay-by .

Tumeke has to profile it's self to the mainstream public . I've said that before . You have to market yourselves . You absolutely have to begin to appeal to the general population of New Zealand . Not in a goofy way . That's being done . How could Tumeke become a non-generic New Zealand icon ,like Four Square or the Rata ? Bomber was going well there until he became too hot to handle and just like other well intended people in the past . He got rubbed out by being ignored by the MSM . Well , fuck the MSM then . Who needs them anyway . We have the Net and Blogs like this one but I can't help but think Tumeke needs to take some kind of physical form in the hearts and minds of people as used to thinking and talking politics as a moth is used to driving an excavator . What about a documentary ? That's a great idea ! The rise of Tumeke ! Get a 5d , a tripod , a sound recordist , two sand bags and a coffee machine . Honestly , that's all it takes now-a-days . MARKET YOURSELVES ! Fight the enemy from within . You're preaching to the converted here . I bet you'd go off with a huge fucking bang ! Or am I being naive ? I now live in the lower half of the South Island thanks to the silly little earth quakes and everybody here is so adoring of the National Party . Why is that ? It's because the National Party have told them to be so . The National Party has been devastating to the South . The South has suffered tremendous losses from Neo Liberal thievery and the people here believe exactly the opposite to be true . It's all because of the spin ! It's infuriating that so few people know who you guys are . It's time to spin it the other way . The way of the Truth .