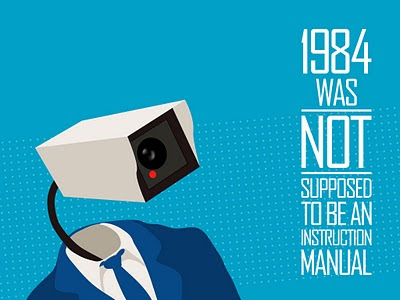 After speaking to people who are in this sector, and as far as I am aware, this is a Tumeke exclusive and the privacy concerns I am about to raise in this blog haven't been voiced yet.

Igloo is a joint venture between Sky TV and TVNZ, it is low cost pay tv aimed at those on low wages and most importantly, and very deliberately, it's aimed at people with low technological skills.

It is the importance of this focus on those with low technological skills that is most concerning and the reasons why they are being targeted should concern anyone with a social conscience.

We are being used as a test case for a controversial new TV technology that if successful will be imported directly to BskyB and could represent the worst excesses of corporate big brother spying tactics and create a form of TV as addictive as crack cocaine.

Igloo is targeted towards the bottom 30% of the population who have yet to invest in digital TV estimated at 130 000 +.

Igloo is a set-top box (STB) with a integral free view UHF receiver. The STB is internet connected and can stream premium content on a pay-per-view basis (Video on demand - VOD). It will work on an average NZ internet speed and the VOD download has a complex encryption pattern which the STB decodes.

Igloo will have a small on-board memory, any movies saved on it will be wiped automatically after two days.

Igloo may allow access to existing i-Sky internet service via a built-in pay-for-view portal (it would be surprising if it doesn't).

Launch date is for the end of this month, you've probably seen the adverts on TV.

The design allows for a maximum of only 11 standard definition TV channels and the STB is built not by Sky, but by News International and BskyB.

The STB doesn't allow for ordinary internet access to U-tube or google tv or any social media which traps the viewer into Igloo only content and is utterly useless in terms of the online content future we are heading towards.

Most worryingly, the system is ultimately designed to spy on every viewer habit and send that information to a third party (owned by Murdoch) who analyze viewing habits and then send that analysis back to Sky and TVNZ to then bombard the viewer with personalized adverts.

This is certainly not new and many internet and social media providers are already playing this game, but this will be a first for the TV industry in NZ, and if it is successful here it will be taken to BskyB.

What Igloo really is about, is a vast market research resource which makes the poorest pay for that market research. Adverts and promotions are to be individually targeted so as to secure further subscriptions to Sky's premium satellite channels. If TV is a drug, this ability to bombard viewers with targeted advertising is crack cocaine.

As soon as you switch Igloo on, the interfaces will constantly bombard you with electronic advertising and 'special offers'. The more you use it, the better the profile it will keep of you.

Igloo is connected via your internet leading to the question, would a 3rd party 45% owned by News International start spying on your ordinary internet usage and start to tailor adverts to that information as well? Igloo is WiFi capable and if enabled could read your personal data on any near by device, including the contents of a personal computer or mobile tablet/phone.

There are a number of security and configuration options built into Igloo that have not been activated at this time, but could be activated by remote commands from Sky TV or the third-party data centre.

This represents a vast big brother ability to create a type of TV that is highly addictive and designed to press your viewer buttons for profit margins. If you go to Igloo's privacy page, they allow for all of this.

Whilst the Leveson inquiry into media ethics holds court in the UK, why are we allowing the very same corporation to be able to spy on the viewing habits of the poor and technologically illiterate without spelling this out to those viewers?

Igloo is an orphan technology that locks these people into intrusive market research tactics to then feed those viewers a deeply addictive and unhealthy media diet.

How our own 'public broadcaster' (and I use that term in its broadest possible meaning) has managed to get involved in this type of scam is beyond me. It seems that TVNZ has no understanding whatsoever that Igloo will only work for pay TV interests and actually accelerate the death of free to air broadcasting.

It's time the media started asking Sky TV and TVNZ some hard questions about Igloo and it's content spying technology.

Is this in any way related to the fact that Dick Smiths seems to no longer be selling My Freeview, or any digital/HD recorders that seem capable of recording from freeview?

Have you any citations to support some of these quite extraordinary claims? You say "ultimately" this and that it will be used to do underhand things, but you don't seem to provide even one reference so that people who are interested in these things (like me) can go away and check this out.

Aso, not really a dig, but it's ironic that you are concerned about the STB but your blog required a Google login to comment, and Google are known to be tracking information in the way you seemed concerned with.

Too few Kiwis have been paying attention to the english parliament’s inquiry into news corporations’ control of the english political agenda.

If they had they would comprehend that the promise to support convergence of the pay TV Sky platform and a much gutted freeview was what got the Nats elected in '08 and '11.

Go back over the history of the decisions -say right from the time that the clark government refused to budge on allowing this which led to Rick Ellis’ first resignation as TVNZ’s CEO and their too little too late attempt to stem the flood of negative labour, pro-jonkey, stories run in NZ media when they put Ellis back in the gig late 2007.

That move was a classic piece of hubris wrecked thinking, committed by a band of desperate whose self-regard had obstructed their ability to strategize effectively.
Like the telecom fibre scam & the sell off our national energy assets, the ability a different government to roll back these nails in Aotearoa's coffin has been blocked until 2020 by which time it will be too late.
Done with a majority of 1. Peter Dunne should be tried for treason.

Thank you Horansome, yes I note the irony. This information comes from a source that wishes to remain anonymous. I'm hoping to generate some attention with this post and get some questions asked.

@ Debsisdead . Yes . Exactly . Dunne ( And many , many others ) should be tried for treason . And who tries people for treason ? The Crown . Who is the Crown ? Not the Gov Gen , the puppet / muppet . Our dear old Queen , that's who . Drop her a line . Ask her to be-head Dunne . He clearly doesn't need it and that hair could be used to stuff orphans pillows or , if scattered around the garden , to trap snails . @ Bomber ! You go guy ! The safest place to have a television is buried below 2 meters of concrete . It's gruesome content should absolutely come with a mental health warning . If life were not so scary and uncertain , these would be exciting and heady times . I get an instinctual feeling that we're heading into something really , really fucking big in terms of media / techno / psycho / us / them stuff . And for those of you wanting a really good scare courtesy of a friendly human ;

The BBC's digital channels were available on all pay-TV platforms in the UK, before Freeview and Freesat were launched. TVNZ7, and TVNZ6 before it, were disadvantaged by not being on Sky from day one.

The 'English' parliament? That hasn't existed since 1707. Same with the 'English' political agenda. Calling British things 'English' is a quaint throwback to when New Zealand regarded itself as 'a British nation'. (Last time it did that, King George VI was on the throne and Sid Holland was Prime Minister.)

However, if Scotland votes for independence and the UK breaks up, then you can talk about 'English' parliaments and political agendas.

What you mean to say that Sky TV isn't already tracking your viewing habits?

@horansome what should bomber do? Not only is it nigh on impossible to get a blog backend that is both secure and not configured to tie posts to a proven facebook, itunes, M$Live, or google nym, none of the major server providers would let it stay online after the first 'concerned inquiry' from the Dept Of Internal Affairs.

Or do you believe that NZ's pols wouldn't do a Joe Lieberman and call on the big providers for a 'heart to heart' complete with big sticks - assured negative media stories; and of course, carrots - govt contracts for the 'patriotic'.
It is up to us as citizens to be aware of this travesty (created by governments & their corporate cobbers) and take the steps required to work around the 'new' 'improved' echelon espionage system that has moved from collecting and collating every phone call and fax to doing the same with every citizen's online activity.
I'm not gonna say how to do it - there is no single 100% method; but there are sufficient loopholes for the big crims and terrorists to get thru.
Why shouldn't we the people, take advantage of the rorts the pollies have put in place for their crooked mates?

Does igloo require internet to be able to view the 11 DVB-T channels?

Also you mention:
"Igloo is WiFi capable and if enabled could read your personal data on any near by device, including the contents of a personal computer or mobile tablet/phone."

How exactly does that work?

Igloo as currently presented looks as much of a dead duck as TVNZ's previous effort with TIVO. It's main purpose seems to be providing SKY with mock competition to help keep the regulators away. TVNZ is so desperate to have any kind of future in internet TV it will continue to sell it's soul to the Devil. The pseudo issues around privacy etc are a useful distraction from the true purpose of Igloo. SKY will always have a better deal on offer to lure Igloo suckers away with. Ultimately Igloo is a marketing tool for SKY.