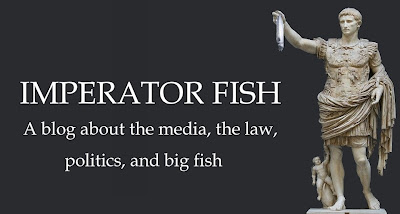 It seems I cut Labour Party hack Scott Yorke a little too close to the bone when I described his blog as "Imperatorfish is latin for 'so much effort, so few laughs'.

When Cameron Slater is your new best friend, you know you are doing something terribly wrong.

No one sums up the smug middle class born to rule dislike of the poor that cost Labour the last election better than Scott Yorke, so why he's the darling of the Standard makes about as much sense as their constant attacks on Clare Curran because she's several class streams too low for her to hang with them at the Kingslander.

The Standard relying on Scott Yorke for satire is like Labour relying on David Shearer being able to articulate a coherent political direction within 60seconds.

After Dim Posts knife job on Chris Trotter on the same day, I'm waiting for Scott Yorke and Danyl Mclauchlan to be caught by Police in a terror plot aimed at eliminating Labour Party dissenters with plans to blow up Brian Edwards, hang Robert Winter for heresy and send Trotter's daughter back in pieces through the mail.

Who would have thought the Labour Party attack blogs had so much time on their hands to waste?

UPDATE: So Labour Party hack Scott Yorke has responded. What a condescending prick. It normally takes lawyers decades to reach that level of god complex, he's done it overnight.

1: You are right, you are not Cameron Slater's new friend, a far better definition would be puppet.

2: Your condescension reeks of all that was bad about Labour 2008.

Have fun with your new friend Cameron Slater.

Unlike the original post (unless there's something i don't know about?), the legal deed is genuinely funny. He looks like he's winning at the moment, perhaps you need to raise the bar? You've written this blog now so you can't claim 'not going to dignify it with a response'.

He is funny and doesn't take himself half as seriously as you do.