Book Tiki Taane for next Blockade the Budget 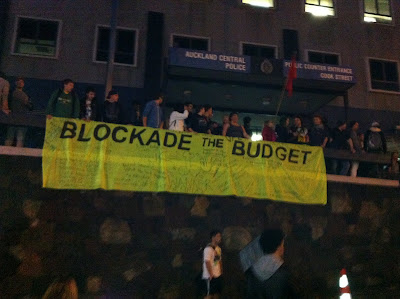 In light of the violent manner Police bashed and arrested an unprecedented 43 students on Friday's blockade the budget demonstration, a new anger I've never seen has been breathed into the student protest movement.

After the first blockade, the Police were embarrassed and decided to confront and beat upon students in a manner not seen since the pub crawls of the early 1990's for the second blockade. Using South Auckland policing tactics on middle class white kids in the central city will birth an angry harvest and Police leaders will be questioning the wisdom of creating a righteous grievance.

Perhaps the Student Association should book Tiki Taane for an impromptu performance for the next protest that is being planned...

Taane, whose song Always On My Mind topped the New Zealand music charts for two weeks, was performing at the Bassy Bizniz show at Mr Cue in Taonui St when police turned up.

Taane began chanting the words "F*** the police", prompting the officers to speak to a person associated with the singer, Calkin said. "He apparently stopped using that terminology."

But when police went to leave, Taane resumed his earlier chants, Calkin said.

...and the Police can be rest assured their over the top handling of the second protest will ensure an angrier and larger confrontation for the next.

But seriously, well done Auckland Police, your ill thought out alpha male bullshit tactics have created an anger I could never have achieved with a 1000 blog postings.

Let's be very clear, the Police actions have seeded this response, be it on their heads the counter reaction.

I think this is exactly what NAct want. Their first instinct is always to unleash the pigs of war, and many of their voters lap it up.

Yep Ovi....you well may be right (correct). Trouble is there is sill a growing 99%. Really all that is in question ia time and space - the time in which sleepy hobbits take to awaken, and the space in which they express how pissed off they are.
Historically thre were those that were strung up on the cross-members of lamposts.
I just saw this Tracey Watkins puff piece in the Dom Post about Cameron and Key being soul mates.
I just had to think - PLEASE don't ask me to be sympathetic when either or both suffer their inevitable fate. I mean to say....both still labour under the idea they can take it with them, AND that their pathetic priviledged offspring place any value on it anyway.
(actually - I's find it hard to be sympathetic if Key's offsping were called to account by the 99% - quite obviously he hasn't yet schooled them in what is their need for spin. Probly just as well really because I'm picking it'll be entirely irrelevant come the day.

Videos or it didn't happen.

Seriously. Videos went out with the ark. Fools are many. Standing amongst us. We say little in the hope for change and do nothing to stem the systemic rot called life in Aotearoa at this present moment.