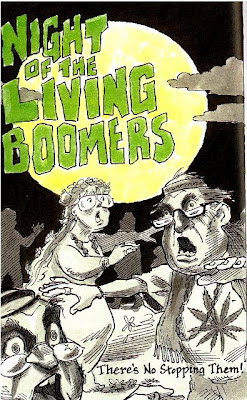 Bryce Edwards puts together a devastating critique of how those bloody baby boomers have robbed the public services they are now demanding we pay as their charmed existence continues into their dear bloody golden retirement...

If you were born in the 1950s you would have grown up as New Zealand's economy boomed, with almost zero unemployment. If your family couldn't afford a decent private rental there were literally entire suburbs of state houses built and available at low rent. These were not the multi-story blocks that later tenants had to endure, but roomy, well-built (and now much sought after) houses with quarter acre sections. If you wanted to own your own house but didn't have the deposit then your universal family benefit could be capitalised and there were subsidised housing corporation loans to make sure the mortgage payment weren't too onerous. Most health and education services were, for all intents and purposes, free. School donations were actually donations - not invoiced with threats of exclusion if not paid. Tertiary education required almost no fees and living allowances were easily accessible, along with plentiful holiday employment.

Of course the top marginal tax rate was 66% in order to pay for all these benefits. But in the late 80s, just as middle class baby boomers entered their high earning years, the top tax rate was halved. That meant the next generation had to start paying and borrowing for their education, along with market rentals for state house tenants and numerous other user-pays charges.

A new generation of graduates already saddled with mortgage sized debt wasn't really a problem. They were told the need to own your own home was irrational and there were plenty of houses they could rent from the well-off baby boomers, who were furiously investing their surplus income in property, claiming deductions but still free of any tax on their substantial capital gains. House prices rocketed - which was great for growing untaxed wealth, but was a disaster for families trying to buy their first home.

Baby boomers who joined Kiwsaver early will have received the highest proportion of Government subsidy for their savings - the state's generosity is already being ratcheted down. Kiwisaver funds will be the icing on the cake for baby boomers,

...Gen Xers and Gen Y should be foaming at the bloody mouth over hoe we as a generation have been screwed by these greedy buggers, and now we have to raise the retirement entitlements as well???

I am sick of hearing that the retirement age has to raise! If Muldoon hadn't deceived the nation and if the Cullen fund hadn't been gutted, we wouldn't have the looming retirement cost issues we currently face.  Thank you National Party.

I'm against raising the retirement age for two reasons. The first is the sheer audacity of baby boomers and their outrageous intergenerational theft. Like a bloated swarm of locusts, baby boomers have benefitted from free education and social services that allowed them a free ride to property speculate Gen Xers and Gen Y out of their first home, and now these greedy boomers want to lift the retirement age just as they qualify? So Gen Xers and Gen Y have to pay for their education, pay for their kiwi saver and try to save for a deposit in another inflating property bubble while being told that they will have a longer working life as well?

What kind of sick joke is this? How come the original youth generation have sold out their early idealism for such selfish indulgence?

The second reason I'm against raising the retirement age is because raising the retirement age is anti Maori and anti worker. The average life expectancy of a wealthy pakeha comfortably sitting behind a desk may be 79, but for Maori men it's a mere 70 years and for the poor their life expectancy is only 73 years of age. Arn't these blokes the very ones who should be allowed to benefit most from a hard life of work?

Haven't they earned their retirement?

Raising the retirement age cheats Maori and the poor while giving those greedy baby boomers another free ride. Let's keep the age exactly where it is and asset test those boomers so they can finally start giving something back from the society they have so willingly taken from.

Not only are they greedy, but they are also ignorant to their own privilege. I'm doing what the rest of Generation X & Y are doing...going overseas until they die - its the only option

Don't let the door hit you in the arse on the way out Oh by the way they had a Second World War and a subsequent increase in population afterward in most of the other countries that you'd want to go to as well. So good luck with finding a place without anyone born pre 64.

I'd rather see this debate couched in class terms instead of a sociological view of generations. Plenty of boomers don't have investment properties and are worried about looming retirement. Plenty of us opposed the first ACT government in 1984, and plenty of us fought to see Aotearoa grow out of being a bigoted semi-colony where Maoris were happy and played guitars when called upon by pakeha. I don't see this baby boomer bashing as any more noble or constructive than beneficiary bashing, and it just serves to muddy the waters and take focus of the real problems.

"Don't let the door hit you in the arse on the way out Oh by the way they had a Second World War and a subsequent increase in population afterward in most of the other countries that you'd want to go to as well. So good luck with finding a place without anyone born pre 64."

Cheers for the heads-up, but I think you miss the point. Its not a hatred of boomers that sends our younger generations overseas, its a hatred of the way NZ has structured its tax, welfare, housing, education and employment policies over the past 30 years so that boomers can hog all the wealth.
I personally find boomers to be quite engaging and interesting...but NZs socioeconomic policies have created inequality and made this country unliveable for many of us.
Not every country's boomers have voted in such a greedy manner.
I don't want to work in NZ and have my taxes pay for boomers retirement. I will be more than happy to contribute high taxes to NZ when the greedy have gone. But over the next 30-40 years you'll probably find me on a beach somewhere around the equator...being unproductive.
I hope you boomers have enough savings to survive under your ideology of 'individual responsibility'...then again, I can see boomers resorting back to socialist ideals when they start to suffer economically.
So good luck in the land of long white retirement village...I'll be back with the rest of Gen X & Y in 40 years when we no longer have to prop up the boomers.
Look out for the hyperinflation.

But wouldn't raising the retirement age, affect the Baby Boomers especially? Wouldn't they be the very ones to get instantly stung by this legislation? By my calculations, people born in the 1950's would not be yet at retirement age, would they?

"I'd rather see this debate couched in class terms instead of a sociological view of generations."

I agree completely, class is THE issue, generational inequality fits within that...it is not one or the other...that's like the media's lame attempt to frame the Mana Party as either a class based party, or a Maori based party...it can be both, because both issues are interlinked and perpetuate each other.

"I don't see this baby boomer bashing as any more noble or constructive than beneficiary bashing, and it just serves to muddy the waters and take focus of the real problems."

Its policy bashing, not boomer bashing...slydixon made the same assumption...but the problem is what cohort of the population voted in these policies and what cohort is benefiting?
How on earth can it "muddy the waters and take focus of the real problems"? I'd say the dissapearence of younger generations from this country is a real problem...and you must understand that a person holds multiple privileges.
Do you think the issue of Pakeha privilege should be ignored because it makes some people take their eyes off class issues? There is not one reason for inequality, and there is not only one kind of inequality.

"Not only are they greedy, but they are also ignorant to their own privilege. I'm doing what the rest of Generation X & Y are doing...going overseas until they die - its the only option"
Sorry but this sounds nothing like a discussion about tax laws but very much like the classification of one generational level of society as somehow complicit in an intentional rort. This is an ongoing theme of Bomber's who I imagine slips into the Gen x fold by the hair from a challenged follicle and is I believe as divisive and inappropriate as any form of rank generalization about any group of people who are grouped by a circumstance entirely beyond their control.

I was curious to where the idea of boomer inter-generational theft arose. As far as I can see, there was a couple of books published in the UK argue this concept in 2010.

Reviews/critiques of these books indicate a complicated set of arguments and counter-arguments that I need more time to digest. However, both critiques find fault with the main argument of inter-generational theft in the book/s.

A book by the right-wing David Willetts, was critiqued in the Guardian in 2010.

. The main problem facing him is the absence of hard data. There is good academic research in the US on "inter-generational accounting", but no equivalent here.
[...]
Willetts might have done better to take as his main theme the links between family, education and social mobility, since on these issues he is on firmer ground. In fact, his title could just as easily have been The Big Grab: How the Rich Are Using Money and Marriage to Buy the Future for Their Kids.

The 2nd critique is of the Willetts book and of another by Ed Howker and Shiv Malik, also published in 2010:

Both books document the myriad problems today's young people will encounter in trying to find jobs, start families, get onto the housing ladder, or even simply 'have a say'; but whereas Howker and Malik concentrate on associating the ascent of the baby boomers with a very recent valorisation of individualism and unfettered free markets, Willets instead explains the apparent intergenerational theft orchestrated by the boomers with reference to social structures that are many centuries or even millennia old. For Willets, it is precisely the size of the boomer cohort that is to blame, not their politics.
[...]
The empirical material amassed in both books is highly impressive, and both are extremely well-written. Yet there remains a sense that their generational approach obscures more than it explains. For Willets this is almost intentional. His main goal is to demonstrate that generational relations matter; in fact he argues that the intergenerational nature of human life has for too long been an under-appreciated determinant of fiscal and economic outcomes. In Jilted Generation, the focus on generational relations leads to an under-recognition of the class structure of the baby boomer cohort, and of the recessions in the 1980s and 1990s that brought poverty and hardship to so many of them during their working lives.