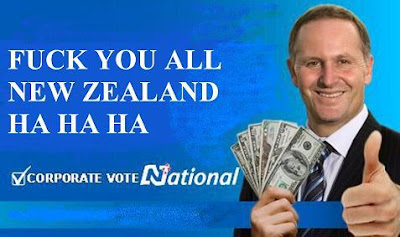 Why the above image isn't really satire.

Tools down brothers and sisters, this will be the most important NZ political news story you read this year. Key's desire to 'do-a-deal-damn-the-democratic-checks-and-balances' style of crony capitalism is well highlighted. The manufactured-crisis-at-the-Hobbit deal, the Mediaworks-deferred-multi-millions-free-show-on-radio-live! deal and the pokies-for-a-convention-center-with-all-the-asthetic-charm-of-a-road-accident deal.

What no one has yet understood however is that those deals are chump change compared to what John Key was quietly planning in the back ground.

When Key featured on The David Letterman Show, we all groaned and I blogged a parody. I wonder if we'd been fully aware of what Key was doing during that trip if we'd all be laughing now?

The article is from one of NZs best journalists, Matt Nippert. He was formally with the NBR and his articles on how Allan Hubbard actually ran his financial empire is a must read for every slack jawed yokel waning on about what a great man old brother Hubbard was.

What Nippert revealed yesterday was that Key has been quietly working on a deal to make NZ a financial 'hub' by wanting to cut secret deals with massive financial corporates who offered to move billions here, if Key changed the law for them. Key was in America during the Letterman interview to meet with Goldman Sachs and Citibank to discuss changing tax law to entice them over here...

...plans were drawn up for Key to discuss the proposal with senior international bankers when he visited New York in September 2009.

That was the trip when the prime minister made headlines with a turn on The Late Show with David Letterman, but Treasury documents show during this visit he was briefed for proposed meetings with the chief executives of Goldman Sachs and Citibank where the hub was to be discussed.

In December 2010 Key said that a major international bank offered to shift business to New Zealand if tax policy changes were forthcoming.

The prime minister told the New Zealand Herald the CEO of a global bank had said if NZ zero-rated foreign funds that are not invested in New Zealand, he would move $2.5b in funds here as NZ would be 50 per cent cheaper than Australia.

Workings by the Stobo report suggest the back-office and administration work in New Zealand for hosting a fund of this size could amount to a dozen new jobs.

Meanwhile, concerns within Inland Revenue and Treasury were crystallising over several aspects of the financial hubs proposal. Officials advised the PIE zero tax proposal be deferred indefinitely soon after the Jobs Summit as it concluded it would cost $10m a year in lost revenue for negligible benefits, possibly breach international tax treaties and open up tax-dodging loopholes.

...let's get this straight. Key resisted the advice of officials and forged ahead with a private meeting with corporate giants yet was still being told it would cost us millions in taxes, wouldn't return the profits promised AND breach international tax treaties?

Who the hell else ever gets away with this sort of behavior as a Prime Minister?

He's not the Trader in Chief, he's the Prime Minister, cutting deals with massive corporates and then getting angry at officials because they are not going along with this farce should be front page news...

Key's frustration with officials who recommended the proposal be canned boiled over the following month when he reportedly told the audience at the International Business Forum that official advice criticising the hub was "absolute rubbish".

Criticism from Treasury and the MED over the hub proposal centred on the controversial plans to provide incentives to financial firms.

Stobo's group's blueprint for the hub, tabled in Cabinet, said these deals should be contractually locked in to prevent a change of government torpedoing the deals, and the details of payments should be made "commercial in confidence" and not be available for public scrutiny.

"Assistance of this type is standard practice elsewhere in the world and is a reality if New Zealand expects to attract first movers of global scale," the report said.

...as should be the fact that the buggers want to keep the deals they cut with the corporates absolutely secret.

The level with which Key has pathologically gone about personally implementing half arsed ideas that benefit the wealthy shows Key isn't doing a 'Chairman-of-the-Board' style political leadership, he is exhibiting all the moral initiative of a pirate addicted to winning plunder.

John Key's like a blue Warehouse, where nobody gets a bargain (unless you are a casino, an overseas media company or financial corporate).

As distasteful as this may seem to many , NZ needs to cuddle up closer than ever to the Monarchy . If we do not ? We'll be colonized by the likes of Goldman Sachs and we all know what that might mean . All you unemployed , single parent , sick and infirm , aging , mentally unwell ... ? You'd better go shopping for real estate . Under a bridge , on the move , shuffling from here to there , staying with relatives 20 to a room . All you in paid employment ? Say goodbye to your weekends . Key-Stien is on a roll and I see , very near in the future , a new emboldened jonky . He'll soon not give a fuck about what we think . He'll just go ahead and do it . Bar coded infants , DNA profiling for all unemployed , a number tattooed on the wrist , indefinite detention .... Oh wait , that's on the way isn't it . You're right Bomber . This should be front page news but it won't be will it and even if it was , what would we do about it ? Nothing would be my guess . As I keep banging on about . New Zealand needs a Royal Commission of Inquiry into the relationships between our politicians and leading corporations . Some might scoff there porridge all over the cat at the thought of it but whats the alternative ?

In all my years in politics, I've never read of such wheeling and dealing.

My message to one million New Zealanders who voted for this crook we call a Prime Minister/Dear Leader - very soon you may be the last people left in this country.

I hope you enjoy having Key and his cronies as your Overlords.

Like you, Bomber, I'm surprised that the msm hasn't made more of this.

But then, National's strategists worked their Dark Arts well, on beneficiary basging.

God help us all.

Reminds me of this image: http://thinkmarkets.files.wordpress.com/2011/12/crony-capitalism.jpg
And why Obama may be the most corrupt Bankster influenced president of all time. Crony Capitalism FTW!