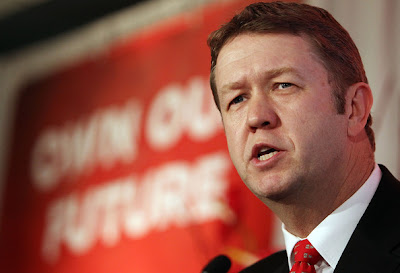 I have just come away from what could be the most important speech given from a high ranking Labour Party politician since David Lange articulated NZ's independent foreign policy in the 1980's.

It was given by David Cunliffe at 2pm Sunday at the Blockhouse Bay Community Centre on his personal beliefs for the economic vision for Labour. 70 people were there by invitation including myself, Chris Trotter and Peter Davis and I have never heard the explanation of why Labour lost the 2011 election and what vision is necessary to regain that support with the passion and intelligence that Cunliffe brought to it.

Cunliffe launched a personal vision of what I'd call 'True Labour', a renouncing of the neo liberal agenda and an explanation that the reason a million enrolled voters didn't bother to vote Labour was because despite a few policy differences, Labour was still the lighter shade of blue.

Cunliffe argued that it's the acceptance of the flawed free market mantra by Labour that has betrayed its social democracy principles and this betrayal of principle was the reason so many Labour Party supporters were uninspired to bother voting.

Such a response to the 2011 election defeat is a resounding blow to the orthodoxy of the free market dogma, and this speech, (what Cunliffe is describing as the first of a series of vision statements), contextualized the failure of neo liberalism over the past 30 years. Tracing the corrupt practices of consultants consulting asset sales for themselves from our own recent history, Cunliffe presented an argument that touches the egalitarian raw nerves of fairness and challenged the rational of simply going along with the failing Washington consensus that we didn't consent to.

The sheer corruption and fleecing of public funds for corporate profit margins at the cost of genuine social investment sparks an anger in NZers that Cunliffe argues needs to be acknowledged and celebrated in an attempt to inspire those million enrolled voters who weren't inspired.

This is the first time any Labour politician has articulated this position and explanation as to why they have lost faith with so many supporters and his denouncement of austerity politics resonates in a way that actually revives the Party.

With the speculation swirling around Shearer's leadership, Cunliffe made it very clear he believed David needed longer as leader to make his mark and that he supported him in doing that, and the energy Cunliffe brought to this speech and the vision he's wanting to inspire has the passion to excite supporters and give Shearer his best chance of leading a winning election.

Labour has needed vision and Cunliffe is providing it. By holding Labour's acquiescence of right wing market fundamentals accountable, Cunliffe explains voter disdain like this, 'when the right say they have to amputate your leg, voters don't want the left responding that the amputation should be at the knee'.

The collapse of free market dogma has never provided the left with so much ammunition, Cunliffe looks like he's going to use it.

Cunliffe's speech tour should attract a lot of attention. 'True Labour' has a lot of electoral appeal.

A solid shift to the left. This is good news for Labour and bad news for the Greens.

good news for labour is good news for the greens because it's good news for workers! I reckon of those that didn't vote (the excluded poor and the stoners), they'll vote both for a strong true labour and a smart new green party. the sun is rising.

Are people really this naive? It wasn't that long ago Jim Anderton pulled the same stunt, after which he stabbed his committed humanist mates in the back as soon as the opportunity arose and scuttled back to the bourgeois 'wouldn't work in an iron lung' party, aka Labour.
All those years of committment by so many activists were flushed down the shitter because peeps were silly enough to trust a member of the self interested cabal who have dominated the labour party for as long as I've been alive.
Cunliffe's game here is obvious to anyone that uses their brain for something more than keeping their ears apart.

He will have told Shearer that he will run off to keep the left happy n stop the greens or heaven forfend, Mana from occupying the space to the left of Natlite whilst whasshisname veers off right in search of the ghost of his hero, tony bliar.

Whasshisname is too weakened to do anything but agree because he is disappearing faster than he appeared. Cunliffe sees himself in a win win situation cause either Shearer fails in which case he is best positioned to take over with his pretend "I didn't leave the labour party, the labour party left me" stance, or some how whashisname survives and Cunliffe has made himself an essential component of the survival of the labour brand.
In the latter case Cunliffe will get a secure spot at the top table from where he can continue the same neoliberal policies he advocated when he was last a minister, all the while sharpening his knives waiting for the correct moment to deliver the good old kiwi 'stab in the back'.

The parallel won't include a resignation from the labour party this time. That would be too obvious; but it will end the same way, with mobs of pissed off activists.

The leopard doesn't change his spots. There is no road to damascus for cynical careerists like Cunliffe. Whatever happens the only person whose lot will be improved by this is Cunliffe, who if he ever got to be PM would indubitably acquire a 'T' in that surname, once real humanists saw him in action.

Be wary of drunken gossip mongers who appear bearing news, Bomber. In the end all they really have is gossip. In the case of this gossip-monger the drivel is mostly driven by a crude racist fear of unwhites. The closet racists in the Labour Party - the types whose attitudes led to the inevitable split with tangata whenua, are shit scared of Mana becoming a viable bi-cultural humanist political force.

Looks as if we are being smothered with politics. Blogging is certainly racing downhill.

@Shreddakj - I don't think it is bad for the Greens, there will always be people on the left who view worker issues as more important, and there will always be some who are more concerned about the environment. Cunliffe is clearly not that interested in the environment, but this is okay given that he is very strong on worker issues. I think a Cunliffe/Norman partnership would make for an excellent government.

Cunliffe just has to convince Shearer. Is this a faux leadership bid just in case?

Cunliffe has one chance at this . If he fucks it up , we're all doomed . Cunliffe ! You have the country we call New Zealand on your shoulders man . All you have to do is tell the truth . Let the Truth light your path . If you let the Truth light your way , all will follow and we'll all be ... well , ok I guess . Don't fuck it up though . We're all gagging for truth and reason and common sense and kindness and all that stuff . We've had a long hard slog of wank , lies and devious cunts fucking us on the deal . No more ! Please !