Dear Auckland - why you should march this Saturday at 3pm 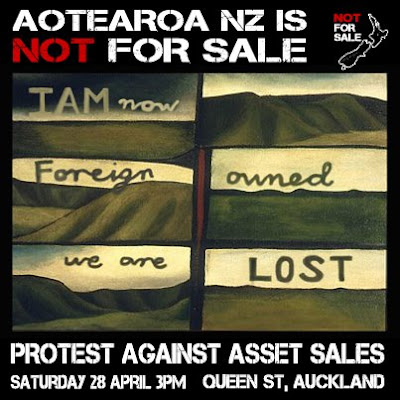 Please come to the protest against this Governments agenda to sell all our stuff. I know the polls keep trying to con you into thinking everyone supports John Key and that being a dissenter is a little intimidating in a country where a sheep like mentality triumphs, but if you are not going to get off the fencepost and make a stand against a raft of policy that enrich the wealthy while grinding the poor- who will?

This Government has no care for the egalitarian values that make us NZers. They are destroying the public services we cherish, whoring off our assets, crucifying the welfare state, cutting dirty deals with corporate monopolies, attacking unions, passing legislation that amounts to the largest erosion of civil liberties, shitting on public broadcasting, selling our land off to overseas interests, empowering the rich with tax cuts we are all subsidizing and lavishing corporate welfare while crippling domestic welfare.

It's our NZ, not theirs. John Key's 'victory' was a mere one seat majority at an election that represented the lowest voter turn out in 120 years. 68% of the enrolled electorate didn't vote for this austerity led by leaders peddling vacant optimism and empty aspiration who decide on costs with no sense of value.

It's time to drop the apathy and resist.

3pm this Saturday, Queen st. Time to get off the fencepost.

Let's show Key and his rich mates that NZ is not for sale.