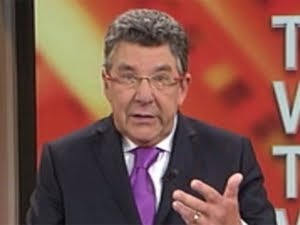 After his race baiting column on Waitangi Day, the grand cyclops of NZ Broadcasting is back hosting TVNZ's attempt at baby boomer public bored-casting with all the smugness only taxpayer funding ever seems to manage. A difficult achievement when you consider Guyon Espiner is no longer part of that equation.

I'm not surprised q+a have blocked me on twitter.

It's hard to screw up current affairs in this country now John Key called his honeymoon off with the mainstream media after the Epsom Tea Party Police bullying amidst a blitzkrieg of hard right soul crushing austerity policy, so the line up is a smorgasbord of political interest. Shearer on his first trial of his Pagani dog whistle will be fascinating, PoA dispute will be interesting given Holmes' anti-Union hysteria over the manufactured crises at the Hobbit and the panel is Boag, Williams and the newly anointed show oracle, Raymond Miller.

David Shearer is up, Shane Taurima is the new interviewer. Best thing TVNZ could have done. Shearer is selling his 'style' which is a justification for his casual leadership which is so laid back it's almost in a coma. Shane brilliantly plays a clip of Shearer shrugging off support for the warfies with a Caucus claiming Labour did take sides. This position Shearer is trying to straddle looks like a catch up job, a self inflicted catch up job.

He articulates the pressure the workers are feeling well, but his lightly lightly diplomatic approach just looks weak. Interestingly Shane suggests it was the Union who asked him not to be involved. It was his strategists, not the Unions.

Shearer is in better standing with his position on foreign ownership. Economic sovereignty is an argument that is difficult to counter.

Shane smells blood in the water over his views on welfare. David spins the Pagani 'social contract' stuff to justify beneficiary cut backs and not giving them working for families. The carefully crafted Pagani dog whistle is aiming to create an Orewa speech in Ponsonby and bennie bashing with a mix of race baiting seem to be the ingredients. Shearer side steps this question line on whether beneficiaries should get working for families because the the line between dog whistle and dog horn hasn't been decided yet and he has these staged speeches coming up to present it.

He's on Q+A to wet the appetites, not spill the beans.

All up it wasn't all that impressive, but at least it wasn't as bad as his early TV performances. He's gotten better, the question is will he get better quicker? The panel think section was interesting. Mike is optimistic, Michelle tellingly justified his pacifism. Miller calls Shearer a Key like politician in that he isn't a traditional politician. Michelle makes a valid point on Shearer lacking the self belief of beating Key, Mike points out David is gaining confidence and he has warmth. Michelle notes this warmth will be what starts to dislodge National votes. Mike notes how difficult fund raising is and how to rebuild the provinces. Mike makes my point that Labour MUST appeal to the enrolled voters who didn't bother to vote. This is where 2014 will be won.

The Ports dispute is on, based on his anti-Union hysteria, Paul Holmes hosting this is about as fair and balanced as Fox News interviewing Barack Obama. Every point Gary Parslow responds to and answers, much to Paul's annoyance. The PoA stooge is on whining that it isn't his fault. All the mediation and negotiation is pointless when PoA always intended to sack the workers. Their crocodile tears are worthless. Compare the attack Paul gives the Union compared to the pash job he gives the PoA stooge.

Just because TVNZ broadcasts this to the public doesn't make it public broadcasting.

This patsy interview is a joke. "Are you anti-family' - how the hell is that a question?

Len is on. He's playing catch up and scrambling to save face in the wake of the damnation he has brought upon himself from the left. Paul is far harsher on Brown than he was with the PoA stooge. He grills Brown on where he got the 12% after the PoA stooge admits the 12% was 'aspirational'.

Len looks like a buffoon trying to defend this 12% guesstimate in light of that aspiration claim.