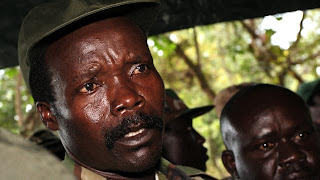 The viral campaign that is circulating the internet on Ugandan warlord Joseph Kony is well-meaning but extremely problematic. KONY 2012 fever has also hit New Zealand, with events springing up all over the nation. To put it simply: if you are going to agitate for reform in another country, you better darn well be open to hearing criticisms and incorporating these into your arguments. It is not critiquing that Kony is a bad guy, it is making sure that people are not having the wrong effects on the Ugandan people in their support of the campaign.

1. The film is a classic example of 'white saviour' complex

Hollywood is awash with films that enable us to access other cultures through what is known in cultural studies and other cultures as the figure of the 'white saviour'. As one particularly en pointe review for the 2009 film Blood Diamond details:

The template for the Up With Caucasians! film was established in 1962 with the release of Robert Mulligan's preposterously over­rated To Kill a Mockingbird. Based on a beloved, fabulously successful, thoroughly absurd novel by Harper Lee, who never wrote another book, To Kill a Mockingbird tells the story of two white children living in the Deep South in the 1930s who gradually come to realise what a ­heroic figure their father cuts after he courageously defends a black man accused of raping a white woman.

The self-congratulatory motion picture was released at a time when black men were still being lynched in the South. Bob Dylan even wrote a song about it. Pioneeringly foolish, To Kill a Mockingbird establishes the basic theme of all Three Cheers for Whitey! movies: yes, there are many bad white people out there who do some terrible, terrible things to black people. But when the chips are down and black people are poised on the very precipice of disaster, they can always rely on some thoroughly decent white folks to step in and make sure that justice prevails.

Films that are examples of this genre include The Last King of Scotland, The Constant Gardener, The Last Samurai, The Help and Invisible Children's campaign. Ruth de Souza has written a brilliant piece on the issues around such sorts of films and the way that they reinforce racial stereotypes in reference to the KONY 2012 campaign. It is pretty obvious through the way that it is filmed that there are not any Ugandans on their board or advising on their media products, as the film that they produce reinforces the white saviour complex and is offensive to many. As TMS Ruge, a Ugandan journalist writes:


It is a slap in the face to so many of us who want to rise from the ashes of our tumultuous past and the noose of benevolent, paternalistic, aid-driven development memes. We, Africans, are sandwiched between our historically factual imperfections and well-intentioned, road-to-hell-building-do-gooders. It is a suffocating state of existence. To be properly heard, we must ride the coattails of self-righteous idiocy train. Even then, we have to fight for our voices to be respected.

On some forums, there are a lot of white people getting angry at being called patronizing. This misses the point - while it is good for us to help, we do need to think about things from other perspectives. Getting angry at someone for having a reaction at their culture being positioned through white perspectives and only one representative of the Acholi reinforces the problem of agency - it's like telling someone that The Help is a great movie when it is slavery told through a white perspective.

2. The bigger problem: the aims of Invisible Children and US presence in Central Africa

Much of the anger surrounding the film is born out of the fact that it positions Uganda as currently being at war with Kony, who has not been in the country for the last seven years. As one representative from the Ugandan army says (apologies, his name is too fast in the movie), the film should have a disclaimer saying that it is factually incorrect. Aside from the Team America, Fuck yeah! approach to resolving problems, the film makes it seem like all of Uganda's problems can be resolved through the capture and extrajudicial killing of one man. According to their own website, there has not been the death of a single person due to Kony in Uganda since 2006. No one actually knows where he is, and the UN have said that they believe his organization is on its last legs. Some people fear that the film might have the effect of making him more popular by positioning him as a martyr.

Disturbingly, an argument is doing the rounds that critics of the video are the same people who argued for interventions in Rwanda and in Bosnia. Let's be clear about this - I think everyone can agree that Kony is a horrible piece of work and has been committing atrocities. But part of taking a realist position on foreign affairs is the understanding that the well meaning intentions generated in other countries do not necessarily result in the effects that we want. Sometimes intervention is the most desirable outcome; sometimes it is not.

This is extremely problematic, as the Invisible Children video advocates the solution of US military advisors to the Ugandan government to help catch Kony - never mind the fact that the Ugandan government under Museveni had also used child soldiers. Michael Deibert has argued that this positioning works to reinforce Museveni's government and potentially eradicates any political opposition's strength within the nation. As Deibert argues, highlighting some of the academic arguments around how ill advised aid can work to prolong conflicts, "Invisible Children is in fact guaranteeing that there will be more violence, not less, in Central Africa". In 2008, the US attempted to kill Kony in Operation Lightening Thunder with the cooperation of Congolese and Ugandan troops. 800 people were killed as Kony's forces made their way to the Central African Republic. As Nick Sibilla argues, this begs the question of whether the US will escalate their presence.

Sibilla's point is worth thinking about here - the US has been engaged in a program since 2008 called AFRICOM which has the stated aim of stabilizing African nations so that there is greater access to resources. The US in this process has backed regimes that also have terrible human rights records, such as Kagame in Rwanda and Museveni. The solution here, as Amnesty International argues, has to be through the UN rather than through a campaign that mobilizes and entrenches US imperial power in the region. To advocate for a cause that states US support as its key goal is thus deeply problematic.

Moreover, the issues surrounding the US' involvement also reinforce some of the problems with the International Criminal Court, which is largely focussed on African nations and to which the US is not a signatory. This is how Bush can avoid being charged for war crimes by canceling visits where he may be arrested, and works to reinforce the perception that the ICC works to the aid of western powers.

If you are going to jump on the KONY 2012 bandwagon, it is very important that you stress to Invisible Children that there needs to be UN action in combination with regional forces such as the African Union or ECOWAS rather than the US. Otherwise you risk entrenching bigger problems than the one that you hope to solve.

"they can always rely on some thoroughly decent white folks to step in and make sure that justice prevails."

Except that in that book, justice DIDN'T prevail, which is part of what made it so subversive, considering where and when it was written - in a place where "the help" was often employed way into the 70's.

Here is an interesting and eloquent African perspective on the video:

"...if a tree falls in the forest and no Americans hear it, does it make a noise?"

-this is the real issue, not some kind of white savior complex (for most people anyway.) I think a better word to describe Americans is the same naivety and ignorance of the world outside of the USA that made them ruin their own economy and freedom over around the same number of people who would die in a smart bomb attack is the attitude that would make them think that killing Joseph Kony, who commands an army of 200 whole soldiers, would benefit Uganda.

I looked at the 'Kony 2012' movement and must admit that I felt some unease at the campaign.

Advocating for a U.S. presence in Africa begs the (cynical?) question; What resources are our American cuzzies after now?"

Considering the mess that U.S. forces have created in Afghanistan, the whole "Team America" approach may be the last thing that Uganda needs right now.

Thanks Phoebe for an excellent article. Add to that stories such as Pocahontas, and even Avatar, and there is the same theme running through - coloured people need a noble white man to save them.

Coloured people are also too often used as props for the character development and ennoblement of white people.