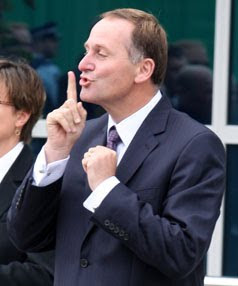 You have to hand it to the National Party, they employ a genius stealth strategy that leaves the left spinning on their heels. So determined and multi-theatre is the neo-liberal onslaught, that even should a left wing Government get elected in 2014, the legacy of unpicking this tapestry of economic self sabotage could take up most of the agenda.

One of the triumphs of National has been the de-fanging of any watchdog that might threaten the privatization agenda. National follow a well worn path with these watchdogs, either stack the boards with right wing acolytes or strangle off budget so that the Watchdog can't resource investigations into abuses of power.

Turning our watchdogs into lapdogs is a neat trick, but the long term impacts don't bode well for our liberal democratic aspirations.

Public Broadcasting is supposed to be a watchdog, but by re-defining talent shows as public broadcasting (because it's broadcast to the public) we mutilate the concept into cheap entertainment to numb and distract rather than engage and challenge. Combine this redefined Circus Maximus content equation to cutting back on public broadcasting funding and the political appointment of John Key's electorate chair onto NZ on Air into the mix, and we have a public broadcasting watchdog that has been neutered and muzzled.

John Armstrong (hardly someone you would call a woolly socialist) pointed out what underfunding the Ombudsman is doing to slow unchecked political power. Slowing our Ombudsman watchdog to a snail's pace could be considered an oversight, but when linked to the exact same resourcing problem at the Office of the Judicial Conduct Commissioner and we get a picture of two of our highest placed watchdogs so squeezed for funding that they can't afford to bark.

How convenient for the Government.

Adding to that convenience is the rumors of 30% cuts at the Human Rights Commission after the Tribunal was stacked by National Party rednecks.

The National Party have systematically strangled off and defanged every watchdog we have while blitzkrieging their privatization agenda through without so much of a whimper.

How terribly trusting of us?

This unpaid 'Public Watchdog' may not have a statutory tooth in my head - but gums are RAZOR sharp! ;) However, really need a bit of financial help right now. Have a BIG mobile phone bill to clear $757.00 before I change to another plan which better suits my increased usage for OCCUPY AUCKLAND 'Activist Outreach' and related work. Also $600 bill for broadband.If 65 people donated $20 - then I would be in the clear. At the moment - I can't use my mobile phone - which I REALLY need as an organising tool. If you support the work I'm doing - here's your chance to show it! KIWIBANK PM Bright 38 9010 0725719 00 www.stopthesupercity.org.nz www.pennybright4mayor.org.nz www.pennybright4epsom.org.nz Penny Bright waterpressure@gmail.com

I find it ironic now whenever I see someone from the left or an anarchist wearing a 'Smash the State' t-shirt or patch. Why? Because it is the neoliberals who are doing just this. The State has its origins in the desire to break the monopolies of Kings and so is an effective mechanism against monopoly. A well regulated state with a well resourced public sector is an effective limiter of monopoly, not as neoliberals would have us believe, its cause. Therefore they act to break down not just the welfare arms of state but also the regulatory side in order that the corporations can formulate monopolies and cartels.
I don't mean that they do away with regulation, they don't. They do however cut the public sector to such an extent that it becomes ineffective as an administrator of regulation and also becomes ineffective in carrying out its other responsibilities. This then allows them to privatise much of the work of the public sector, such as prisons and soon ACC.
The media is almost wholy owned by such monopolies in the current era so the fact that they don't speak out against the neoliberal agenda should come as no surprise...