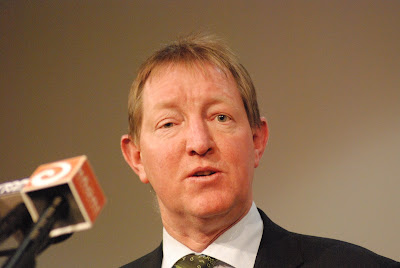 Oh what a wicked tournament of lies this ACC fiasco has become.

Let's be clear. I don't care IF Nick Smith has had sex with Bronwyn Pullar. I don't really care all that much that Nick wrote on ACC letter head that he had known Bronwyn before her accident and can attest to the negative impact it has had on her since.

Yes I know Nick over stepped himself with the letter, and yes naughty, naughty. But this sexual innuendo and apparent over stepping of Cabinet protocols all pale into insignificance to the central issue here, that NZers are getting dicked around by bloody ACC who will use every excuse under the Sun to deny compensation.

Even National Party activists deserve to be treated with dignity and watching ACC throw Bronwyn to the Police over a faked allegation that she threatened to expose ACC negligence in return for compensation boils my blood. I say faked because the doyenne of the right, MFB (Michelle Fucking Boag) was in that meeting. Say what you will of 'chelle, but she ain't stupid enough to rock up to ACC in the capacity of a support person and threaten them with a bribery option. That ACC are trying this on is extraordinary.

We are seeing an arrogance on behalf of ACC that should be deeply concerning. They actively decline people requiring help, through their own negligence they release confidential papers and when called on it, bully and intimidate a woman who has an existing complaint against them.

This is a story of a department out of control and drunk on it's own power, it has bugger all to do with Nick Smith.

My inner cynic says that the culture at ACC has purposely been pushed in the direction of arrogance/non-compliance with the purpose for which ACC was set up to such an extent because when it becomes totally 'not fit for purpose' lobbying will intensify for the coverage to be moved to private insurance providers.

I think there is another side to Nick. I think he has lots of women friends. Not sure if Bronny is among them.

thank you for good letter Bomber

Say what you will of 'chelle, but she ain't stupid enough to rock up to ACC in the capacity of a support person and threaten them with a bribery option

Ok then, I'll say this of 'chelle, she was stupid enough to try and illegally (?) record proceedings of the winebox Royal Commission. Not exactly clean in the integrity department, that's only my opinion, mind.

I hafta agree with the writer up thread who raises the issue of deliberate destruction of ACC's reputation, by the Nats so that Joe Citizen won't care when they flog off the profitable parts (esp on the job workers comp).

Right now it don't matter where you get hurt in a accident, you're covered.

If ACC has to compete with the big transnational insurance companies, who will only cover loss of income incurred at accidents in the workplace, a cheaper proposition resulting in lower premium rates that will be the end of ACC. Kiwis injured outside their place of employment will have no coverage at all.

The Nats have had ACC in their sights on behalf of their big corporate sponsors since the day they took office. Remember how the new Key govt forced ACC into a state of near bankruptcy by insisting that the 2008 losses ACC incurred on investments be considered in isolation. Pretty much every investor took a haircut in '08; ACC less than most. Considering their portfolio over a longer period, say 5 years, shows them well ahead of the game & better than most corporate owned funds.

Key govt squeezing ACC & demanding an increased dividend, has all accident victims copping a raw deal. Not cause of ACC but because of the govt draining their funds.

Good on the ACC staff for treating NAtional Party activists the same as the rest of us, no matter how many blow jobs assorted ministers may have obtained in return for pressuring mid level claims officers to treat 'friends of national' differently.
Even now key and his cocksuckers are using this flagrant example of dodgy behaviour by a minister to alienate kiwis from their much envied, no fault, comprehensive accident compensation scheme.
I doubt the author was born when shenanigans occured to those unfortunate enough to suffer an accident prior to Norm Kirk's introduction of this scheeme.

Before it was typical for those injured at work to discover they weren't hired as employees; they were 'sub-contractors' meant to carry their own insurance to cover the costs of an expensive, delayed and capricious lawsuit to get compensation for thie injuries.
Lawyers were expressly forbidden from taking a case on consignment - that is only billing if & when they won a case.
Even with a expensive Queen St lawyer or 3, the victim could lose if the 'defence' argued the accident was the fault of the poor fucker who got injured. eg not having somone hold their ladder, even if the employer was meant to supply that person the victim climbing the ladder was negligent, not the employer who didn't supply him/her.
Getting injured meant a life of poverty, pain, and underfunded medical treatment.
Yeah lets have that back again. If we do, why shouldn't Ms Pullar cop it from her mates just like the rest of us do?

I disagree about Michelle Boag. I think the hubris from which these pricks suffer does lead her to be exactly that stupid.
Meanwhile, Key and co continue on with their plans of letting private insurance take over.

Smith's ministerial resignation achieves nothing. Dear Leader will simply replace him with another Ministerial Clone/Clown.

a. ACC not fulfilling it;s duties

b. a current government that is screwing the country

Yup, it's as simple as that.