Evolving the Treaty of Waitangi 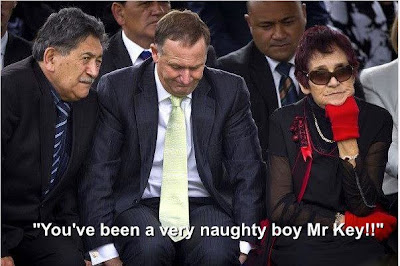 Her Majesty the Queen of England confirms and guarantees to the Chiefs and Tribes of New Zealand and to the respective families and individuals thereof the full exclusive and undisturbed possession of their Lands and Estates Forests Fisheries and other properties which they may collectively or individually possess so long as it is their wish and desire to retain the same in their possession; but the Chiefs of the United Tribes and the individual Chiefs yield to Her Majesty the exclusive right of Preemption over such lands as the proprietors thereof may be disposed to alienate at such prices as may be agreed upon between the respective Proprietors and persons appointed by Her Majesty to treat with them in that behalf.

In consideration thereof Her Majesty the Queen of England extends to the Natives of New Zealand Her royal protection and imparts to them all the Rights and Privileges of British Subjects.’

Happy Waitangi day my fellow NZers and Whanau, on our day of creation as a country here’s what I really like about our treaty. Regardless of the English or Maori version used, the treaty lays out the power relationship and responsibilities between the state and the individual and as we face the next great depression I believe there is strength in that realization.

We don’t have a Declaration of Independence or Constitution guaranteeing civil rights, but we do have a treaty which right off the bat sets up the Crown’s responsibility protecting the rights of Maori, I believe that we should look to expand that relationship so that it’s not seen as just something 'just' for Maori but for all NZers.

I think we should look to expand the definition of the Crown/Government as having a responsibility to protect the rights of all NZers. I believe that we can expand that definition without taking anything away from the position of Maori as the indigenous culture but we view it as a power dynamic between the individual and the State. The State is there is protect all of us, to protect all of our rights and our Treaty clearly sets out that dynamic of State responsibility in Article two and three. For me Article One is about ceding sovereignty to the State to have the power to fulfill its obligations of responsibility, not about having some type of Orwellian crush of personal sovereignty where Maori and Pakeha alike are slaves to the State.

For me the Treaty is a celebration of understanding the role of the State and the individual, a symbiotic relationship where we the individual cede to the State the power to protect our universal civil rights including property rights.

That's why Key's jaw dropping arrogance to remove Section 9 from the SoE ACT is so shocking and so angering. Key claimed he will find an 'elegant' way forward, yet his ignorance on the issue doesn't support any of the grace elegance requires. Key claimed that Section 9 had never been tested in court, less than a week after he made that assumption, Mai Chen wrote a damning column throwing Key's ignorance back in his face...

* In the seminal 1987 Lands case, the Court of Appeal held that section 9 amounted to a "constitutional guarantee" to Maori, which restricted the Crown from going through with the wholesale transfer of Crown lands and assets. The Lands case resulted in the Treaty of Waitangi (State Enterprises) Act 1988 which gave the Waitangi Tribunal binding powers to recommend that land that had been transferred to SOEs be transferred back to Maori (it is these "clawback" provisions the Government has said will apply to mixed ownership model companies).

* In the Coal case, the Court of Appeal held that mining rights were "an interest in land" for the purposes of section 9, requiring the Crown to devise a scheme for safeguarding Tainui against the sell-off of Crown land; and

* In the Broadcasting Assets case, the Privy Council held that section 9 imposes a continuing obligation on the Crown to take reasonable steps to assist in the preservation of the Maori language by the use of both radio and television broadcasting, and an obligation of active protection where the Crown's actions resulted in the vulnerable state of the language. This decision was central to the creation of Maori Television.

...Key is either an ill briefed Prime Minister or is purposely attempting to set race relations back a century.

Pakeha who don't want asset sales can look at the Treaty in a whole new way and finally feel their national sovereignty is being served by it. We need to evolve the Treaty so that we all feel that it protects us and in turn protect it.

Brilliant , brilliant post Bomber Bradbury . A glimmer of hope right there . The specter of Maori and non Maori New Zealanders using the best intentions of the Treaty to unite us all against foreign and domestic corporate tyranny must send shivers up that which masquerades as jonkys spine . Munit playing that hauntingly beautiful tune at the end was a master stroke . Lets all help jonky move to Hawaii ! Do we really need nor want the little Harvard educated , Prince of Ponce here ?

I don't think Key believes in race, culture or nationality. He believes in money and that's it. If the Treaty stops him selling stuff off, he'll probably throw a hissy fit and disappear from our shores forever. He's only here to sell and privatise. Being cruel to the poor, while no doubt emotionally satisfying for the likes of Paula Bennett, is nothing in comparison to the pats on the head Key will be expecting for holding Aotearoa down while his rich mates have turns raping our heritage.

Sorry Minuit . I spelled their name wrong in a previous post . @ Ovicula . Exactly ! And why is he here ? Really ? Why would anyone put themselves through this Prime-Ministerial shit when they're worth 50 Mil and with a house in Hawaii not to mention the other spoils and riches Elders or The Fed Reserve can afford ? And good on you , Maori people ! Personally , I'm proud of those of you who stand up for themselves ! I'm proud of those who made a fuss and pushed and shoved ! Well done and Happy Waitangi Day . And as the wine ( Cheap ) seeps mercifully into my brain stem , I have to wonder what kind of man John Key really is ? We slag him off and call him names and I cringe when I think of his wife and kids should they come across my comments on the little fink . So why ? The more I try to evaluate why such a sharp mind such as Key seems to have is devolving down such a perilous path is beyond me . Does he need a hug ? Does he need a smoke ? Does he need to listen to Minuit or Trinity Roots ? Is he so far removed from his innate sense of humanity ? Good grief ! Give me a fermented glass of Gods good grape juice and I want to wear fluffy slippers and forgive my enemies . That is , until I learn Key was beseeched to be Optimus Prime by the Great Neckless One ... The One From Ashburton ! The town of What Ever It Takes ... ! Where Jesus Is Lord ! That's right ! Hide your pets ! Cover the fish tank ! The sky is darkening ...children run to their mothers ... dogs bark ... ! Jenny Shipley ! Shipley hounded Key to try for PM and now here he is ! It's like I'm tangled up in an Alfred Hitchcock plot . Sorry , I didn't mean to say 'cock' . Perhaps 'dick' would be better . Alfred Hitchdick . John Key and Jenny Shipley staring in an Alfred Hitchdick movie where by they double -cross and fuck over an entire country and as we sink below a cruel sea , seagulls peck our eyes out . Charming .