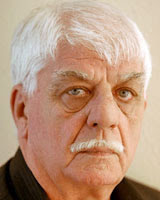 He will be as sadly missed as gonorrhea.

I heard the news that Garth was leaving the Herald while fishing, so forgive my lateness in posting, but I really didn't care enough to break my holiday because who wants to kick a dog when it's down?

Well, not on holiday anyway.

There were times when Garth wrote with genuine soul and passion against free market social policy that devastated the poor under National in the 90s, but that was a long time ago and became partly eclipsed by his moralistic fundamentalist Christian hard core literal biblical interpretation type columns, his most infamous being his unblinking column on the Earth being flooded by global warming.

Garth argued that there was no way global warming would flood the earth because God had promised Noah with a rainbow that he would never flood the earth again. That any Newspaper would allow an adult to put out a column like that is deeply distressing for all concerned.

I don't blame Garth, he was old, but the Herald should have known better, their closeness ultimately betrayed him into making us forget his better arguments.

Now all the NZ Herald has to do is dump David Farrar, Jim Hopkins and Paul Holmes and they might make a stab at being a balanced nationwide newspaper to the 68% of the enrolled electorate who didn't vote for this Government.