Dear Auckland Council - how stupid can you be over the Occupation? 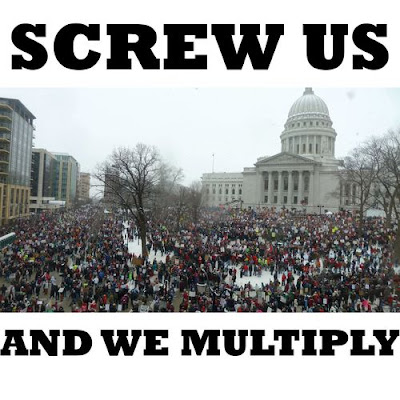 There are moments of utter stupidity by people in authority that makes one roll ones eyes and shake ones head. The decision by the Auckland Council to send in the security thugs and NZ Police using dirty filthy tactics to hide their identities to clear out the occupation protestors is one such moment of utter stupidity.

Forget the fact that the Occupation movement is RIGHT when they protest at the despicable way corporate finance has been used to empower the 1% while molesting the remaining 99%, forget that there is an ongoing Court case to settle whether the protestors can leave, let's just focus on the reality that the Occupiers themselves were so close to leaving altogether.

Having been down at the camp myself, talking to many of the protestors and fragmented leadership, it's clearly apparent they accept the movement is losing steam and they wanted to look at new ways of making the occupation movement work. I suggested 'flash occupations' using social media networks, and many there were looking for a way to move on. The manner however in which the the Council roughed up protestors yesterday means that the issue is now personal and protestors don't seem to want to do anything more than dig their heels in.

The Council have made their bed, now they can lie in it.

By the way Len, real leadership would have been to take the costs of the occupation to central Government and demand that they pay them as it is John Key's policies that are increasing poverty and inequality.

Oh give up your socialist nonsense. Real leadership would have been to cut ALL benefits to the occupiers as they arent trying to help themselves. the so called 1% pay 50% of the taxes. the 1% are not the problem. It is these losers, and their warped sense of reality. get a job

Good post Bomber . ' Flash Mobs ' is an excellent idea and I hope it catches on . Len Brown always reminded me of the last tomato sandwich at the bottom of my school lunch box . A bit limp and if there's no other choice , I'd have to gag my way through it just to fill the gap . @ Candid , or is that Candida ? ( candida |ˈkandidə|
noun
a yeastlike, parasitic fungus that can sometimes cause thrush. • Genus Candida, phylum Ascomycota, esp. C. albicans.)
It's probably best to still your poison pen and let people think you may be a idiot instead of writing ignorant , hateful and separatist gibberish thus proving them right . What do you think ? By the way capital letters usually follow things like full stops , exclamation marks etc . For example . fuck ! off , would be . Fuck ! Off !

What knowledge of politics, people, economics, finance, sociology, the Occupy movement or anything at all do you base your comments on?

I note that ad hominem attacks are the only type of criticism shafted at the Occupy movement by critics. If such critics thought about things for half a moment, they would realise that the reason they are not coming up with any genuine points of argument against the movement is because there are none.