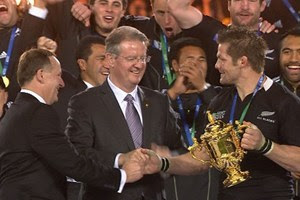 The right wing and mainstream media have relentlessly written Goff off, this is his chance to over shadow Key. Let's get ready to rumble.

If Mark Sainsbury is the Walrus of news, Guyon Espiner is the egg man.

Media panel is Fran O'Sullivan, Wallace Chapman and Shane Taurima, and that awful Claire Robinson and Jon Johanson are with Sainsbury.

Key up and running with his first 30seconds, he's claiming his economic plan is working.

Goff is talking about leadership - talks about egalitarianism and asset sales.

Goff claims retirement age has to come down, Key claims under National's plan he can pay retirement at 65. Goff fires up at John's claim that Labour will simply borrow. They clash.

Phil playing the statesman, Key looks like he's prozac relaxed. It comes across as smart arsed.

Asset sales are promoted by Key, he smokescreens where the money will go (education rather than South Island irrigation) Goff makes his heaviest hits telling Key that he doesn't own the assets.

Capital Gains Tax, Goff is selling this as fairness and revenue raising. Key claims tax slows the economy down.

First video question is about efficient public services - the way Key is going there won't be a public service. Waste of a question, but have to have one right wing question I suppose.

Key keeps claiming he will get the country back into surplus, Goff points out 100 00 NZers have left the country and that all Key is offering are tax cuts the rich.

Key keeps claiming he will create 170 000 jobs. Goff says he will tax the rich.

Another right wing question bitching about too much business regulation.

Key coming across like a dick with his bananas and retirement age line.

Goff points out Key is a liar over raising GST, Key laughingly tries to justify that lie. Keeps using drunken sailors as a metaphor.

Fran asks how they will half youth unemployment. Goff says he will up skill youth and pay their dole to an employer, Key says he will make young people work for sweatshop wages.

Onto Bennie bashing by Key and his weird nanny state desire to run beneficiaries lives, Goff points out that isn't the solution and $5000 tax free will help them.

The 3rd question is about a new NZ flag??? Where the fuck did they get these questions?

Finally a debate about the Environment, glaring green elephant in the room is that the Greens aren't involved in the debate. Key says Rena was annoying. Goff sticks it to Key over mining.

Great question from Wallace about what they would march for, Key says he would march for a competitive economy? The reincarnation of Milton Friedman? Goff lists what he has marched for, and that's the point, Goff has marched, Key would think about marching.

Key is ultra relaxed, it's easy to look that way when you don't give a fuck.

Next question - about the Pike River Mine, first one that isn't a waste. Goff gets stuck in over the mining safety standards.

Shane Taurima asks how his family come back from Australia, Key gives some ridiculous excuse about better economy, Goff points out that tens of thousands have fled NZ and that National have failed to close the gap.

Key will close the wage gap with Australia by paying youth sweatshop wages? Who is buying this bullshit?

I'm confused, I didn't realize Claire Robinson was running for leader of the National Party?

Key blames 'dynamic environment' for lying - I'm using that next time I'm in trouble with my girlfriend.

Great question about Afghanistan, Key claims we aren't killing Afghans, We have to be in a war propping up a corrupt narco state because we live in a global society? Unbelievable. Key won't say he will not re-deploy SAS - says it's 'unlikely' - this will be the first promise Key breaks if re-elected.

Surprised there wasn't a 3 way handshake.

So who won? Well, Goff has been written off all year yet he won the argument, Key looked relaxed, too relaxed. The question is will NZers buy Key's style or Goff's substance.

As a final thought, why the hell didn't Wallace Chapman host the TVNZ debate - come on, his question was the best moment of the entire debate!

Did you see this website - http://keyholes.co.nz/ ? Live tracking of all Key's lies. I think this is the first truely digital election in NZ and it's amazing to watch.

The question is will NZers buy Key's style or Goff's substance.
They'll vote for whoever the mainstream media "suggests" them to vote for. Guess who the media wants us to vote for? John Key really reminds me of Silvio Berlusconi.

Goff looked a little too angry at times, but if you say he's trying to tap into then I wouldn't disagree with you.

I really think by the end, when Goff was fired up a bit, he was outclassing JK completely in style as well as substance. Key looked like a naughty, shifty, little boy in the Principal's office by the end (minus the cuteness).

Elaine that's exactly what my girl friend was saying!
Goff won on substance but Guyon and the questions seemed so rigged it was stupid. I think Guyon got a hard word before the first break.

John Key is like Berlusconi - the job is a hobby to him and he has the fake hair as well. He just reeks of insincerity, Phil the complete opposite. The Phil we saw tonight is the same Phil Goff who is widely respected by governments overseas, for being a very able and hard working politician! We found that out from Wikileaks!

Important not to confuse desires with perceptions.
The Herald is already covering over the cracks of the debate by making a bigger issue of when Cunliffe will 'take over as labour leader" than of the debate.
That mob of foreign greedheads are really starting to get on my wick. The herald's political editor os a foreigner who refuses to take out NZ citizenship despite having lived here for a number of years How can he be politial editor of a NZ newspaper if he has no skin in the game?

The long term effects of Key's skullduggery won't effect those who leave once the money has been made.
I raise it because it was that foreigner Johm Armstrong who accused the last Labour Government of 'spending like a drunken sailor" in this weekend's Herald. Remember the government where Finance Minister Cullen returned a surplus every year is accused of 'spending like a dunken sailor' nevermind the Nats have run a deficit ever since they got in power. right here :
Having spent taxpayers' money like a drunken sailor to stay in power
How does Armstrong just happen to use a John Key soundbite in an article right before Key himself first uses it?
Do Herald readers care that their newspaper's journalists are working hand in glove with a political party a la Rupert Murdoch and David Cameron?

Who knows? Don't they know the Herald is 'owned' by a couple of ne'er do well irish brothers fronting for the russian mafia?

Why do they imagine that the interests touted on behalf of dodgy foreign owners would align with their interests as new zealanders?

These carpetbaggers taking advantage of the Nats 'favours' just want to rip everything they can outta New Zealand as fast as possible and go somewhere else once the easy rorts dry up. These are the sort of people that John Key worked on behalf when he was a Morgan Stanley Banker and nothing has changed since he became PM. He will let them grab hydro power generators for next to nothing then crank the prices up as they see fit. They can't lose every time oil rises so does hydro generated power, even though they don't use any fuel to generate the power, generating hydro costs nothing apart from maintenence. And we're selling this? Suicidal madness.

For all Key looked relaxed his body language was quite poor. He refused to look directly at Goff at any point, almost as a child would, he looked out of the corners of his eyes and sneered, brows raised. I think Goff really does disconcert him. When you're a pretty boy reliant on charms, you don't want to suddenly find yourself in the ring with a prizefighter, however old and tainted.

It was an interesting strategy of Goff's to address directly at Key a number of times. I would have thought in a TV interview that it would look funny, but in actual fact it worked really well, mainly because Key doesn't seem to be able to handle it.

This is one of the best blogs I've read so far. It's nice to see a change from all the "Those bloody lefties!!!" type comments and blogs.
There's a reason Phil Goff got so fired up, he actually gives a shit perhaps? Giving a shit gets one riled up, it's normal. Key is way too relaxed. I don't get why people are buying his relaxed stance. You can see it clearly in his eyes. He just does not give a fuck. You don't need to be a psychologist to see it.