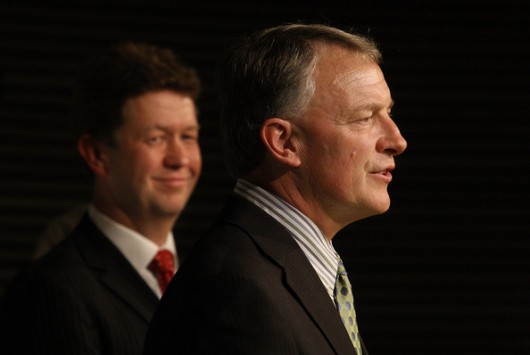 Labour's decision not to launch their party is being taken by many as an acknowledgement of the lack of popularity of Goff as preferred leader. This is partially true - Goff is only polling at 8% in the preferred leadership polls compared to Key's 56% and rumors of a potential leadership coup have dented faith in Goff's capacity to generate the personal rapport necessary for electoral victory.

However, the build up to this election has been unusual and left Labour with limited options for gaining traction. While we would usually have a little more emphasis in the mainstream broadcast media coming up to an election, this has been largely forsaken for the last month due to the pleasurable vacuum that was the nationalist euphoria of the World Cup (so pleasurable indeed, that a third of New Zealanders when polled said that they cared more about who won the RWC than who their future leader was). This has left Key with a plethora of photo opportunities that have been heavily capitalized on by National, not only in the radio interviews that Key did with celebrities such as Richard Branson, Peter Jackson and Ritchie McCaw, but also in the omnipresent paternal figure of Key looking over every single one of his candidates on billboards across the country. As a leader, Key has been extraordinarily popular in the polls, and his overexposure has meant that photo opportunities of Goff with a spade cleaning oil in the Coromandel have not been able to get the same kind of traction when he was already viewed as not as popular. The commentators are right in saying that much of the election campaign is fought on personality, although this is not good for New Zealand's long term policy in an economically difficult time, particularly when the rosy projections of our economy ignore the reliance that we have on commodities and exports, which are much more fragile in the global scheme of things than they have been positioned.

In light of this, the lack of launch on Labour's behalf is perhaps not so silly, or at least not as silly as Brash's trip to Europe four weeks out from an election. They need to focus on policy, as that is where they are most likely to gain points against Key. This is where the coincidence with Labour's launch of the savings policy today is prudent.

The main criticism of Labour by National is that they blew the economy under Cunliffe with overspending, and that the economy is still trying to recover from this. However, National have been slow to address this overspending, and where they have announced cuts, they have been careful not to isolate the middle class before the next election. Thus while they've directed heavy critiques at Labour for policies like Working for Families and Kiwisaver, they have hardly touched them, knowing that both policies are aimed at the precious middle classes that largely dictate coverage and reaction from commentators (partly because they have the disposable incomes that appeal to television and newspaper advertisers, and partly because the majority of the commentators themselves fall within this income bracket). Working for Families was only altered at the top, ranging from around $5 less a week for those earning $50,000 to around $9 a week for those earning $90,000. This was hardly the move that many of the hard right expected in the party, as the opinion is that the Working for Families is a waste of taxpayer money through middle class welfare. Kiwisaver, we are told, National will make compulsory if they manage to maintain to keep the government's books on track. This will cost them an extra $550 million over four years. Most of National's proposed cuts have been aimed instead at those on the bottom: 100,000 off benefits as recommended by the Welfare Working Group, and a whole lot of rhetoric on solo mothers and teenagers who buy cigarettes and alcohol. As Matt McCarten pointed out the other week on Radio Live, the National Party at the moment has all of the rhetoric of a centre right party, but little of the bite, as it opts to preserve votes for a second term over cuts.

Labour's raising of the retirement age to 67 allows Labour to position themselves as harder in relation to National to some of these criticisms. That this occurs over 12 years means that they will not be isolating the people that are already in the retirement bracket now. Kiwisaver will become compulsory, but it will be the employers that cop the brunt of the rise in contributions, going from 3% to 7%.

The policy has raised some interesting debate. Farrar predictably has focussed on the impact it will have on employers, citing the same argument as the minimum wage. While this notion of losing jobs by increasing wages to the young has been the subject of much international debate, such as the lack of correlation with this in the UK, Farrar's arguments will hold with employers but not really with Labour's traditional voters, who are currently being hit hard by inflation and the accompanying rising costs in food. Sue Bradford for Mana tweeted that this would disproportionately affect lower incomes, and No Right Turn has stated that it will also impact on Maori's lower life expectancy. John Tamihere on Radio Live was interested to see if it was appealing to people who would not vote for Labour over their own voters. But as Bernard Hickey pointed out on Twitter, the Kiwisaver moves will accelerate private savings, which is essential to control a debt in New Zealand that is largely private rather than public. Whether Labour could maintain the policy of raising the retirement age to 67 with their potential coalition partners is another matter to be seen. Russel Norman of the Greens has done a press release that says this needs to be open to discussion.

So while Goff and Labour might be appearing to be minimizing Goff's presence before the election, focussing on the policies with one month to go is probably the most sensible thing as they will make more ground than they would by focussing on a presidential-style campaign.

While it's obviously too late for Labour to change its leader, perhaps a good strategy now might be for someone to get the message out that there's going to be a leadership change after the election regardless of the result, and that the leader is likely to be David Shearer. Even if it ends up being one of the other Davids - David Shearer is destined for the job - getting rid of Goff after the election must be a dead certainty. It can only be helpful if people were reminded of that a little more so that images of Goff as PM can be rightfully erased from the collective consciousness of voters.

Labour is going in the wrong direction by increasing the pension age. It is an anti-worker policy. Workers have become more productive over the last century so the working hours should come down. Labour should be aiming to restore the 40 hour week with punitive overtime payments. The retirement age should come down and the pension should go up. If they don't see it as anti-worker they should reflect on the huge protests in France last year when students and youth joined older people to fight increasing the pension age from 60 to 62!

Don't know if this is worth running with but the #OWS message is "Us v 1%" or "we r the 99%". . . . . How about whizzing roung with a black spray can and "1%"ing all the piccies of Key on the bill boards. It sorta ties him into what he really is - one of the Merrill Lynch/Golden Sacks/BofA scum bag Money Junkies. I LIKE IT !!!!

i was thinking about this wednesday - 2nd Nov . Johnny boy is in ChCh to debate Phil at Christs College. Wonder what his mood would be like if every nat sign he drove past had a big 1% sprayed over his image. . . he'd probably pop !!!