Some still entertain the notion that in the future humanity will achieve greater freedom - that the arc of civilisation runs in a single direction from a society mired by repression, slavery, secrecy and suspicion, dominated by a permanent and narrow elite relying directly on the brute force and intimidation of over-indulged thugs to maintain their system to a quite different society that is rational, open, egalitarian having an accountable, democratic governance with the rules made by a process of consent and enforced by professional bodies under an independent judiciary. We have not met this ideal in this country and under the present National government we have continued to slide backwards towards a rule of law concept that resembles a rule of police and little else. That most of the population seem unaware - or worse, supportive - of this regression is firstly a sad reflection on the critical abilities of the mass media, and secondly a function of the silence, aquiesence and complicity of civil society (including the opposition parties) who align themselves with the conservative elements of the establishment.

There are so many instances of this regression over the last term of the NZ parliament (let alone the ones immediately previous under the Labour government) that the task of listing them all is too large to undertake here, so I mention just a few from the last week to demonstrate how far we have sunk.

Justice Minister Simon Power's contribution to the nation begins and ends with his work as the NZ Police Association's proxy. His/their
DNA dragnet is set to sweep across basically everyone arrested: 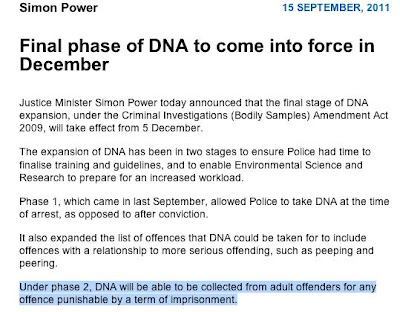 The "final phase"? Does anyone really think they will stop at this point - they haven't so far - every step has been followed by another. It's only "Phase 2" after all, that doesn't sound like final - it sounds like the one just after the start. And what a start:

Phase 1, which came in last September, allowed Police to take DNA at the time of arrest, as opposed to after conviction.
[...]
Under phase 2, DNA will be able to be collected from adult offenders for any offence punishable by a term of imprisonment.

Seeing as how - in the real world - people are only arrested for imprisonable offences of which there are legion - that means everyone arrested is to have their DNA taken. And the racial profiling survey the NZ Police have initiated and have been running for some years now will also accompany that no doubt so that they can continue to build upon their pseudo-scientific racist nonsense as a basis for analysis (as opposed to any other aspect of a person's biology such as height, build, eye colour etc.). Oh, you didn't know they are doing that, that they are using it to specifically create a racial profiling database? I filled out the paperwork just so I had some rights to investigate it and have access to what they were doing. When that comes out it may cast the questionable NZ Police motivations in an even dimmer light than it is already. 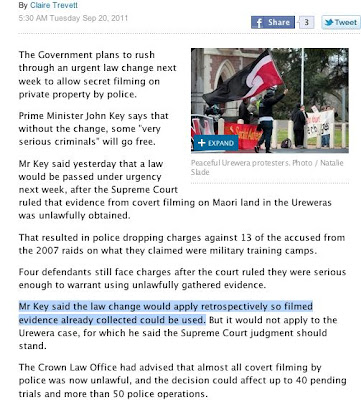 The NZ Police deliberately, knowingly, actively, go about breaking the law so that they may then go to the government and demand that because they have broken the law the law should be changed to make their illegal law-breaking legal. Anyone else would be prosecuted, the conspiracy to breach the law investigated and the offenders committed for trial. In this country the ruling politicians run scared of their own police force, excuse any - if not all - of their spectacular incompetencies and wave the magic wand of parliament over their mess and hey presto! - all their crimes are retrospectively validated. The law is the law, unless you are the NZ Police, in which case the law is what they tell the Cabinet it ought to be.

The NZ Police is constituted under the law that the NZ Police themselves drafted and which was dutifully enacted on the NZ Police's own timetable by the previous Labour government. It maintains that the PM appoints the Commissioner directly, that there is no board or body to which they are accountable except the PM and Police Minister themselves.

Are these conditions not an inaccurate description of a 'police state'?

And as of today still no mention of their plans on the Beehive official website. Keeping secrets about the secrets.

Meanwhile Simon Power's other monument to his erosion of civil liberties has now gained the support of the increasingly parasitical National-aligned micro-parties and is threatened to be rammed through the House next week. While some aspects are technical and do respond to the need to improve on the time delays of criminal proceedings it is being used to wantonly tear at the fabric of the system's traditional safeguards. Under the guise of efficiency jury trials will now only apply to offences of two years or more, meaning a judge alone will determine their fate. Added to the closed-circuit camera appearances allowed under previous legislation, the expansion of search and surveillence authority and the never ending stream of new imprisonable offences - petty and otherwise - the justice system as we have known it is under attack from within.

The theme with these laws is to remove judicial and independent oversight and consent procedures so that they empower the NZ Police and other government agencies to act, unchecked, as a law unto themselves. The great fallacy is that this move to judge-jury-executioner powers for the enforcement and monitoring officials will result in a more efficient system that brings offenders immediately to the point of punishment and consequently also is a deterent to the commission of offences generally. While it may do the former - at the expense of the determination of whether a person is actually guilty of an offence - it will never achieve the awe of deterrence. Indeed the effects of this harsh and arbitrary enforcement regime is the contempt for officials and the undermining of the system of law and state justice as a whole.

Fear is a poor substitute for respect - it is the method of a bully and a cause of many a righteous rebellion.

Ever since I can remember, the NZ Police have had far too much power and have been accountable to nobody except themselves. Their thirst for more powers is insatiable and politicians are too pathetic to stand up to them.

The facist police state is well on its way to fruition!

Bloody disgrace, we ought to take back our government and our country, the police have no right to - oh wait, someone with jackboots just broke my door down.

Thanks Tim . I'm ever more enlightened . Is there a police man or woman out there whom might have a comment on this subject ? Seriously , I'd like to know . I'd also like to know if the police really , really want to pick up the Police State label and so feel alienated within the neighbourhoods they're charged with trying to maintain the peace within . Is this what cops want ? Or is this what the Neo Liberals want to create . A Fascist Police State that the general population have no confidence in and worse , fear ? . I bet I could sell Insurances to that population ! I bet I could sell home security to that cringing population ! Hell , I bet I could sell heroin to school kids in that environment ! I bet I could have a successful private police force business and co-join it to a private prison in that environment . You'll know when your really fucked when the Police come around , smash their way into your house and take away a family member and that family member is never seen again . To all you lazy pricks out there who are too indifferent to make an informed vote when you need to . If you ever feel the need ! This fiasco is YOUR fault . You must maintain the democracy your ancestors died for to give you . So get your arses into gear and make a stand ! It's nearly too late !
I'd like to see a Terry Pratchet universe where all the bad guys and good guys and cops and gangs stood together , shoulder to shoulder to protect and to defend against the Big Bogy Man ... Oh , wait ! That's called war isn't it ?

@ alex et al . Well written , in my humble view . Yes , lets take our government AND our country back ! It's not the police's terrain yet and it CERTAINLY DOES FUCKING NOT belong to the Banksters , Insurance Company fraudsters , Media Liars , their cowardly minions with their flash hair and pretty suits nor is it a naive , pretty girl innocent to being plundered by a soulless Real Estate ' Industry ' who bloat house prices so as Banksters and Lawyers can fuck us on the deal , enslave us for life and bleed us out through unnecessary borrowing . New Zealand is OURS ! So fuck off you useless , greedy , cheating , lying , amoral scumbags ! However ... Business is business . If a business person can see a way to fuck us on the deal , they will take that opportunity without the slightest hesitation then sleep like babies . I say , lets focus on our current ranking of politicians . It is they who need a fucking fright ! They need to be shown their place ! They are there for us . We voted for them as a display of trust and pay them very well and they just keep pimping us out , lying to us and making us do with the crumbs while they rort us to fuckery for the stuff and the things that belong to us all ! ( I'm speaking broadly here for the sake of a rant ! ) ' How do they do that ? " I hear you ask . Well , it's pretty fucking obvious by now don't you think !
Write to your MP's and ask them your questions ! They are duty bound to reply ... once . So make it a good question . Then , you can post your question , with their answer on social networks and show how dumb they try to seem to be , of how slippery they've been schooled to be and of how cruelly callous to our needs they are in favour of their lavish lifestyles which WE PAY FOR ! WHen you've only got weetbixs to give your kids for dinner after paying the rent , power , phone , bus fare or petrol for your shitter , know that the politicians who should be caring for you and respecting you are swigging flash wine and eating art food and laughing at you behind your backs ! Angry yet ! Excellent ! Write your letters , ask your questions , make appointments and show no fear ! Rise up and make a racket ! Join your Union , don't borrow money to buy the shite they peddle and know your Rights !

Mana thats were we need to vote this election - fuck labour . .they r just national "lite" wedded to the "torrent Up" not trickle down like they try and mesmerize us with and lonmg ago abandoned their core values and constituents. Listened to Hone Harawira last night in ChCh. . .He has it right - this isn't about left v right (just another paradigm to keep us thinking there's a choice!) It's about rich v poor and the ONLY party - fledgling as it is with little time before the election to campaign, is MANA. Hone might be "controversial" but his heart is in the right place as is Minto's, Sykes and Bradford's