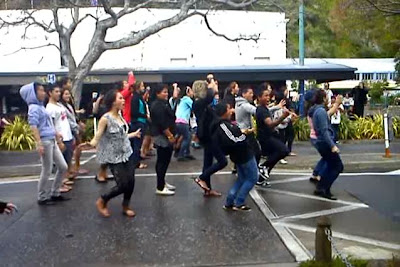 There was a flash mob haka in the main street of Whakatane on Saturday - so something was up - and thankfully it wasn't anything to do with the rugby.

In a shop I overheard some kids with 'Ngapuhi' t-shirts on saying something about a flash mob so I was lucky enough to get a pic when it happened. It's a joy to see a real haka performed by people who know what they are doing. It wasn't "THE haka" - the Ka Mate haka - it was their haka, and for a 30 second spectacle (over before it even had time to block the traffic) it was wonderful. I do share the thoughts of others who say THE haka as performed by random people for no particularly important purpose at any occasion or non-occasion is a lessening of this display and it is for that reason - cultural credibility - that I have never felt comfortable joining in that sort of thing. Maybe a street haka by the youth would be considered similarly inappropriate by the elders, but I thought they did a good job. 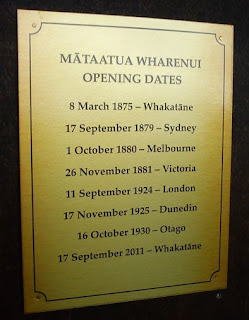 The crowds were there for the opening - or re-opening - of the massive Mataatua wharenui of Ngati Awa - located at the far end of the CBD. It's the biggest one I've ever been inside anyway. It has many amazing carvings and for that reason the NZ government - soon after it was erected in 1875 - took it. Without kaumatua to accompany it - the NZ government refused even that request - it went on a journey around the world which at each stage resulted in further desecration to the meeting house embodying the tipuna (ancestors) of the Mataatua people (the waka from which Whakatohea, Tuhoe and Ngati Awa tribes of the Bay of Plenty descend). In Australia it was reassembled with all the carvings facing outwards, damaging the wood, in another it was chopped short to fit it inside the museum - unthinkable mishandling in today's terms, but a function of the normal colonial presumption of European dominance over the indigenous at that time: controlling, cutting up and asserting ownership over their possessions.

After more than a century it has returned and the European contribution of recessed lighting, central heating, electrical sockets and neutral-toned carpeting is at least some sort of recompense for the inter-generational loss of this magnificent taonga. 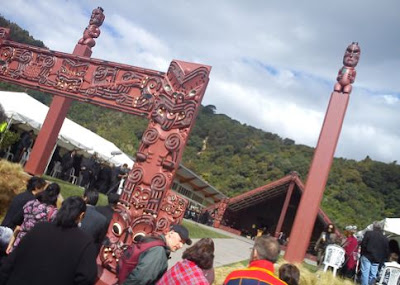 Everyone from Maoridom seemed to be there. Tame Iti listening to the ukes and singing of what I think were a Cook Island group: 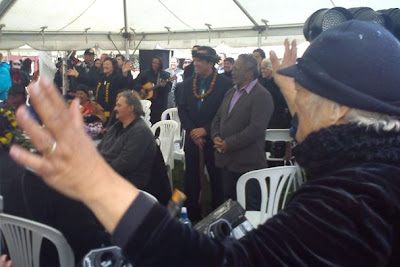 There was royalty and rebels from all over the country and from the Pacific. Talk about a flash mob! That's Kingi Tuheitia in the hat and I think, Wira Gardiner, to one side in the portico. Now that is a walking stick! 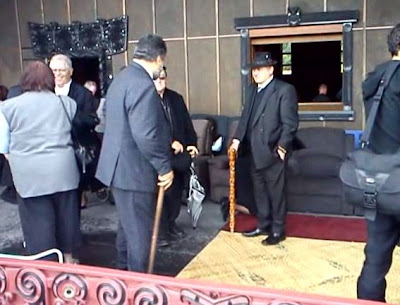 I saw several black suited men with ear pieces standing around the perimeter of the block so I expected Ministerial cars nearby. Nothing. I joked to someone that they were Destiny bouncers. Well actually... later on in the midst of ten or so black suited men (no women around it must be noted) next to the whare kai waiting for the dinner was the unmistakable grey greased-back hair of Bishop/Pope/Saint Brian Tamaki. Flash mobsters. Must be the most insecure male in NZ to have to hide behind a retinue of goons like that. No-one else - not Ministers, not the Maori King, not the foreign dignitaries - felt the need to be huddled in a scrum of their own flunkies like that. And it's the poor of his own parishes paying for that ego trip - sad. If he is from Mataatua though there's nothing stopping him from attending I suppose. I missed the speeches but I doubt he would have been invited to address them.

And talking about feeling insecure and sad, I also saw Te Ururoa Flavell there too. He came over and gave the small group I was with a courtesy hongi and left. It's not like a handshake because you are literally in each other's face and you can't help but feel the intensity. The last time we met - at that hui in February where we got stuck into him - was similar. Later I saw him wandering about, by himself, in front of the Whare for several minutes pacing backwards and forth, looking around, stressed, not knowing where to go or what to do while everyone else was at ease and socialising. Indicative of his party I thought; and although it was tempting to take a photo and make something of it I didn't. I almost, almost mind you, felt sorry for him.

Later on when shopping on the other side of the river I took this picture of the biggest rainbow I've seen in ages. I couldn't fit it all into frame. It was right over the town. Some Maori regard the rainbow as an ill omen - for me I imagined it directly over his electorate office. 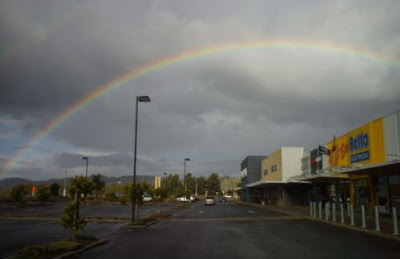