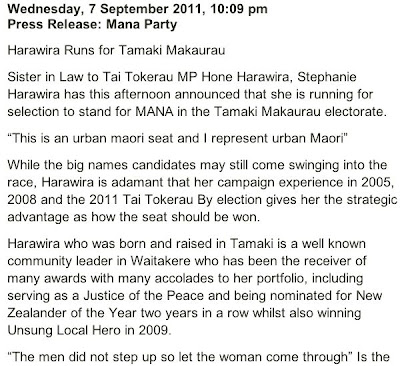 Nothing official yet from the Mana party on their nominees, but Scoop has this news:
Sister in Law to Tai Tokerau MP Hone Harawira, Stephanie Harawira has this afternoon announced that she is running for selection to stand for MANA in the Tamaki Makaurau electorate.

John Tamihere has been on Radio Live saying Willy Jackson is over at a selection meeting for Mana. Well, what does this mean?

Willy Jackson has been a stronger advocate for a compromise between Maori and Mana parties than he has been an advocate and activist for the Mana Movement. His vacillation over standing against Pita Sharples and Shane Jones in the Tamaki Makaurau Electorate will not serve him well I would have thought. Partly it may have been out of political courtesy to give these impressions, but it is difficult to tell if Willy has the fire in the belly to win Tamaki Makaurau.

I don't know Stephanie Harawira so I don't know what her chances of selection are if a big name like Willy should stand. My feeling is that Willy is just not going to be a hard enough candidate against Pita or Shane to take the seat because he has too much personal respect for both men and this will dull the edge. Even with a huge swing from Maori Party to Mana it is a big ask. It will be interesting what the radical elements in the proliferation of Mana branches in Auckland have to say.

Mana wants the party vote when push comes to shove - but if they could take Tamaki Makaurau it would be a spectacular win since they are the third horse in the race behind two big figures. I don't know who else is putting their hand up for the seat, but Willy does have competition and he will have to earn the nomination.

Good luck to whoever the Mana candidate is - they'll need it.

My thinking is that Willy Jackson will not contest Tamaki Makaurau, instead he will contest Hauraki-Waikato. You really want to make sure your big guns get into Parliament, and Nanaia Mahutua doesn't speak on Maori issues the way Willy Jackson does on talkback. She also has association with the Tainui troubles going on.